Settled by Native Americans, conquered by Spaniards, then included as part of Mexico, this region is rich with history and culture. This part of North Texas was also home to several legendary Texans, including Dwight D. Eisenhower, Sam Rayburn, and Sam Bell Maxey—their stories are each told at a Texas Historical Commission state historic site in the area.

Denison, a railroad town, arose from a relatively wild frontier community during the 1870s, where “tent cities” surrounded the more law-abiding selection of businesses along Main Street. In 1988, the City of Denison joined the Texas Main Street Program to revitalize and preserve its historic downtown. Since then, more than 420 buildings have been rehabilitated, Main Street has become a thriving cultural and entertainment district, and the city was a semifinalist for the prestigious 2019 Great American Main Street Award. 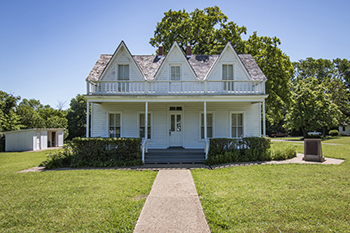 Huck’s Catfish is a neighborhood restaurant, owned and operated by the original owner, serving hearty catfish and seafood dinners. The most popular items are the fried catfish entrée with two veggies and the Cajun-spiced grilled salmon steak.

Before Davis on Morton Bed and Breakfast transformed into a country inn to house guests, the home was owned by businessman John Bue McDougal and designed by French architect Pierre Lelardoux in 1900. Today, the Victorian bed and breakfast offers four suites, parlors that can be closed for special events, a dining room, and a wraparound porch that overlooks the East and West Gardens.

Nearly 30 miles to the southeast is Bonham. Named in honor of Alamo hero James Butler Bonham, the community received an early start in Texas, formed from an 1837 settlement known as Bois d’Arc and renamed Bonham in 1844. The community served as supply base for settlers moving to North Texas as well as businesses in nearby Fort Worth. 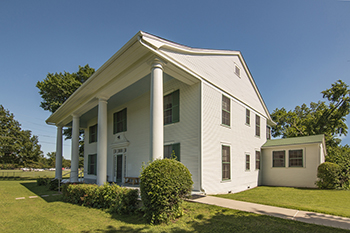 Congressman Rayburn also commissioned the Sam Rayburn Library and Museum, a Texas Historic Landmark, as a tribute to the people of Fannin County after being awarded $10,000 for distinguished service to the nation. The museum, opened in 1957, houses a replica of the Speaker of the House of Representative’s office during Rayburn’s tenure.

The nearby 1888 Fannin County Courthouse, featuring a THC historical marker on its grounds, once embodied the Second Empire architectural style with its elaborate roof and clock tower. However, in 1965, the building was covered with limestone and modernized to mimic an unadorned Art Deco building. The passage of two recent bond proposals ensured that the courthouse will be returned to its original 1888 grandeur. The full restoration is now underway as part of the THC's Texas Historic Courthouse Preservation Program (THCPP).

Just southeast of town is Bonham State Park, which includes and surrounds a scenic, 65-acre lake. Created by the Civilian Conservation Corps in the 1930s, the park provides ample water recreation activities, camping, and hiking or biking on nearly nine miles of trails.

Muddbones is a popular and renowned spot in Fannin County. The Smokey Deluxe burger with pepper jack cheese, grilled jalapeños, and onions sautéed in jalapeño sauce is the most popular menu item.

Built in 1880, Granny Lou’s Bed and Breakfast was converted to a bed and breakfast a century later with restored furniture. The country inn is within walking distance from downtown and the newly constructed Powder Creek Car. Granny Lou’s offers fresh, cooked-to-order breakfast each morning as well as special dining options and wine and cheese pairings.

About 40 miles east of Bonham is a charming town with a world-famous name. Established early in 1845 under the Republic of Texas, Paris has served as the Lamar County seat for more than 150 years. Named after the French capital, the Main Street city pays tribute to its namesake with its very own Eiffel Tower. But it comes with a twist: the Paris, Texas replica is embellished with a red cowboy hat! 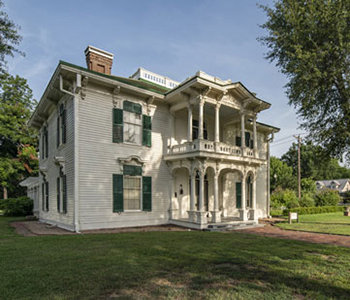 Among Paris' many notable historic structures is the 1917 Lamar County Courthouse. Designed by the Fort Worth architectural firm of Sanguinet and Staats, the unique building combines Classical Revival style with heavy Romanesque details, arches, and columns. The latter features echo the previous 1897 Romanesque-style courthouse, which was destroyed by the Paris Fire of 1916. In 2006, the current courthouse was rededicated after a THCPP-funded restoration.

Three other renowned Paris structures, all listed in the National Register, are the First Presbyterian Church, First United Methodist Church, and Scott-Roden Mansion. Built in 1892, the First Presbyterian Church is the oldest among the three structures. The semi-circular arches characterize the Medieval Romanesque style. The late-19th and early-20th-century Classical Revival period influenced the design of the First United Methodist Church, while lthe intricately detailed Scott-Roden Mansion combines Art Nouveau and Dutch Renaissance styles.

Voted best barbecue in town for nine consecutive years, Scholl Bros Bar-B-Que serves staples such as ribs, pulled pork, and brisket along with classic sides. This rustic joint is consistently recommended by locals, and customers rave about the tender meat and cole slaw.

Built in 1871, Old Magnolia House Bed & Breakfast still maintains its original design and decor. The stained-glass window in the front door and the doors etched with the letter “L” for the Ledger family remain untouched. Old Magnolia offers three rooms and a home-style Southern breakfast each morning.

About 30 miles east of Paris is Clarksville. Established by James Clark circa 1833, it was chosen as the county seat when Red River County was developed in 1835. Now a Main Street city, Clarksville takes pride in its history and heritage attractions. 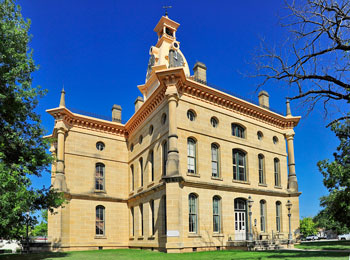 Located a few blocks from the business center, the National Register-listed Red River County Courthouse remains the only intact construction of architect W.H. Wilson. Built in 1885, the Renaissance Revival-style courthouse received a full restoration as one of the first participants in the THC's THCPP. It was rededicated on October 26, 2002.

Part of the Northeast Texas Trail, a 130-mile route along repurposed railroad lines, links Paris and Clarksville. Hikers, bikers, and joggers can get away from it all, exploring tranquil forests and checking out the small towns of Reno, Blossom, and Detroit along the way. Detailed information on route segments, trail conditions, camping, lodging, dining, and area attractions can be found at NeTexasTrail.org.

Courthouse Inn Bed and Breakfast allows for a relaxing stay with antique beds, whirlpool tubs, furnished antique parlors, a wraparound porch, and a balcony with wicker swings and rocking chairs. It’s walking distance from downtown, the Red River County Courthouse, and Red River County Library. Guests recommend walking to the town square to enjoy a picnic on the lawn.