The Texas coast stretches 350 miles from South Padre Island to the Louisiana border, extending through a diverse array of towns, each with their own rich history. The southern portion of the coast—roughly 100 miles of shoreline between Rockport and South Padre Island—offers travelers a diverse range of heritage tourism opportunities.

Initially referred to as Star, The Pass, Ropesville, and Tarpon, Port Aransas was officially named in 1911. The town preserves its past by maintaining its 19th-century historic architecture. Visitors can partake in many natural excursions such as tarpon fishing, kayaking, and surfing. Along with its relaxed activities, Port Aransas offers historical experiences making it an ideal tourist destination. 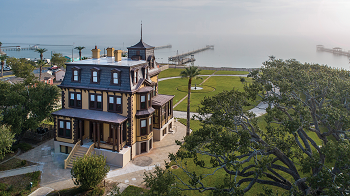 Just across Aransas Bay in Rockport-Fulton, the ornate Fulton Mansion State Historic Site, decorated with dark columns and trim, embodies the wealthy home life of the Fulton family. Luscious grass covers the perimeter of the house, and oak trees surround the sides. The house is filled with love, as well as interior gas lighting and flush toilets. George and Harriet Fulton bought their dream house in 1877 with profits from their ranching empire and spent their lives together in the mansion.

The La Salle Odyssey museums capture Robert Cavelier, Sieur de La Salle’s expedition to Texas, from its conception in France to the discovery of the remains of his ship La Belle. The THC offers a La Salle Odyssey mobile tour with supplemental audio tracks and videos. But the infectious passion of the museum workers, details of the exhibits, and access to more knowledge from the displays and staff members make the visits worthwhile.

In the early 2000s, the Texas Maritime Museum in Rockport joined the La Salle Odyssey project to show the daily life aboard La Belle. The artifacts range from navigational devices to medical instruments and a large wooden model of the ship encased in glass. The museum also includes reimagined exhibits, allowing visitors to experience the life of the French sailors and their navigation skills.

For a relaxing day, visit the CCC-constructed Goose Island State Park. Although visitors cannot swim at the park, they can camp, fish, hike, boat, and observe the wildlife. The 1,620-foot-long fishing pier and boat, kayak, and canoe launch make fishing easily accessible.

Roosevelt’s is a classy, simply decorated restaurant connected to the historic Tarpon Inn. It serves traditional American dishes such as the filet and seared ahi tuna—each is packed with flavor. However, this upscale dining is on the expensive end. For a more affordable option, the restaurant will cook a visitor’s catch and serve it with julienned vegetables for $20 a person.

For a memorable experience in a charming seaside village, book a room at the historic Tarpon Inn, listed in the National Register of Historic Places. Built in 1886 with surplus lumber from Civil War barracks, this Port Aransas icon is an “inn” in every sense of the term, offering a slice of life in the late 1800s. Its old-fashioned style means there is no TV in any room (Wi-Fi service is available). The rooms are small, but the vintage beds and furniture are charmingly refreshing.

Another historic lodge that resembles the late 1800s is the Angel Rose. Originally a Victorian home, the Angel Rose is now a bed and breakfast. Maintaining much of the house’s integrity, the B&B only has three rooms. Angel Rose is a six-minute walk from the Texas Maritime Museum, but guests can rent bicycles for a faster (and more-scenic) option. 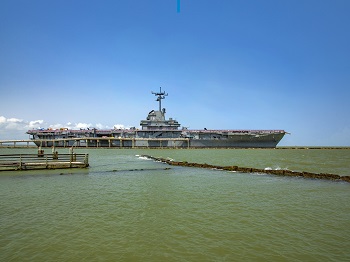 The massive USS Lexington looms large in the Corpus Christi Bay. Once the nation’s longest-serving aircraft carrier, this decommissioned World War II vessel is now a 33,000-ton floating museum. Visitors can experience tours of the ship’s decks and quarters, view restored aircraft, and interact with a high-tech flight simulator.

To learn about the region’s natural heritage, visit the Texas State Aquarium, which inspires appreciation for the Gulf of Mexico and beyond through its exhibits. The Blue Hole and Coral Reef show the area’s unique geography and vibrantly colorful and diverse fish. Others show dangerous predators at close yet safe distances. The aquarium rescues and rehabilitates endangered species such as sea turtles and sharks.

For locally harvested seafood at affordable prices, visit Snoopy’s Pier. In 1980, Ernie Butler and his wife purchased a bait stand and burger joint, which they transformed into a restaurant with recipes shared by their family and friends. For dessert, customers can go next door to Scoopy’s, offering treats and ice cream.

Hotel De Ville is adjacent to the beach, a Ferris wheel, and the USS Lexington. The convenient location gives families a versatile road trip experience. The rooms are recently renovated and spacious.

South Padre is accessed from the mainland via the Queen Isabella Causeway at Port Isabel. For a more serene locale, visitors can continue north past the attractions for an uninhabited beachfront stretching for 26 miles.

South Padre’s history began when the Spanish established a permanent residence around 1804. Prior to then, only nomadic Native Americans and survivors of three shipwrecks in 1554 inhabited the space. In fact, remains of the wrecked fleet of ships reportedly lie beneath the waves. 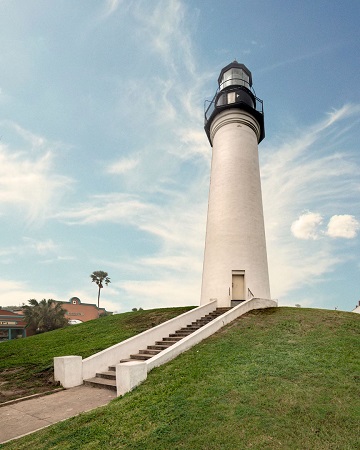 Built in 1852, Port Isabel Lighthouse State Historic Site has withstood the weather for over a century. One of the only Texas lighthouses open to the Texas public, the 72-foot structure offers beautiful views of coastal sites not accessible elsewhere in the state. At the base, visitors can see the lighthouse keeper’s cottage.

Located near the historic Port Isabel Lighthouse, Manuel’s has been offering reasonably priced fresh food for 27 years. Now near the Miramar Hotel in a small red building, Manuel’s offers authentic Mexican food, including the popular wet enchilada wrap. Note: Manuel’s is cash only.