Step back in time and experience the period of the Texas Republic in person at one of these Texas Historical Commission State Historic Sites. 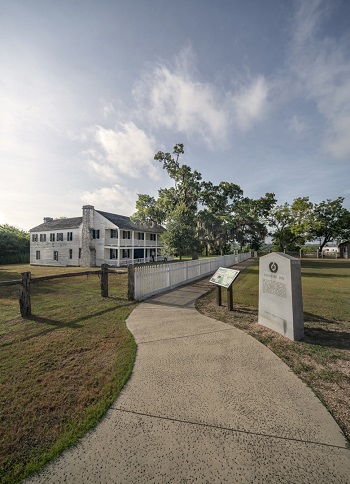 Commemorating the location where, in 1823, Stephen F. Austin established a headquarters for his colony in Mexican Texas, San Felipe de Austin State Historic Site and its new museum share the stories of early settlers in this region. Today, visitors can walk in the footsteps of these early pioneers at what was the social, economic, and political center of American immigration to Texas before independence. San Felipe de Austin didn't survive the war for Texas independence—it was burned by its own residents as they evacuated during the Runaway Scrape of 1836.

Now, a new interpretive project nears completion. It’s called Villa de Austin, a group of buildings that evoke one section of the town similar to how it would have been in the first decades of the 1800s. Buildings include a schoolhouse, hotel, printers’ office, and courthouse. The work is informed by archeology and archival research that gives insight into what San Felipe looked like nearly 200 years ago. Villa de Austin is scheduled to open to the public in summer 2021.

After driving through miles of surrounding petroleum plants, visitors to San Jacinto Battleground State Historic Site encounter the welcoming beacon of Texas independence, represented by a remarkable 570-foot-tall monument. In true Texas style, the limestone edifice honoring the site of Texas’ decisive victory over Mexico was deliberately designed 15 feet taller than the Washington Monument. The 1,200-acre site preserves and interprets the legendary battleground where Texians defeated the Mexican Army in an 18-minute battle on April 21, 1836.

The monument—topped by a 34-foot star symbolizing the Lone Star Republic—also features an elevator ride to the observation deck, a 490-foot-tall vantage point offering stunning views of the battlefield, reflecting pool, and nearby ship channel. The adjoining San Jacinto Museum of History contains nearly 45,000 artifacts and writings spanning 400 years of Texas history.

Built in 1834 by English immigrant Henry Fanthorp, the historic Fanthorp Inn State Historic Site once hosted Sam Houston and Zachary Taylor during the Republic of Texas era. It remains a charming historic building with solid timber craftsmanship and furnished rooms offering a glimpse into life on the Texas frontier 170 years ago. The La Bahia trail passed by the inn, bringing visitors via stagecoach and horseback. Fanthorp was admired for his business acumen—charging $2 per guest and running a profitable agricultural enterprise with sheep and corn. The arrival of railroads caused stagecoach traffic to decline, prompting the inn to close in 1868. 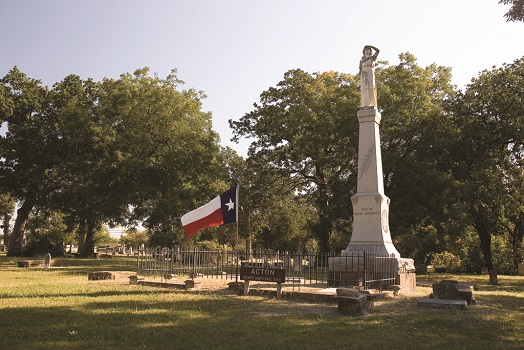 Elizabeth Patton married David Crockett in 1815, becoming his second wife. In the mid-1850s, many years after Crockett’s 1836 death in the battle of the Alamo, Elizabeth moved her family from Tennessee to the Acton area to claim a land grant for the heirs of Alamo defenders. She and two of her sons settled on the 320 acres granted to them by the Republic of Texas. After her death at the age of 72 on January 31, 1860, Elizabeth was laid to rest in the Acton Cemetery, dressed in the widow’s black she had worn since hearing of her husband’s death. In 1911, the state placed a monument at her burial site, commemorating the widow of one of Texas’ most celebrated folk heroes. Acton State Historic Site is Texas' smallest historic site, with a total of .01 acres.

The French Legation State Historic Site in Austin began in 1841 as a private home for France’s representative to the Republic of Texas, Alphonse Dubois, after the French monarch officially recognized the Republic of Texas as a sovereign nation. Dubois was promoted to “chargé d’affaires,” which is a diplomat who heads an embassy in the absence of the ambassador, and established an official legation in Texas. When Dubois was unable to find a suitable house, he hired builders to construct the Legation house.

The historic structure, landscape, and new visitors center provide a cultural destination where people from the surrounding neighborhoods can gather. Outdoor interpretive panels explore the development of the French Legation property and the site’s role in the development of East Austin. 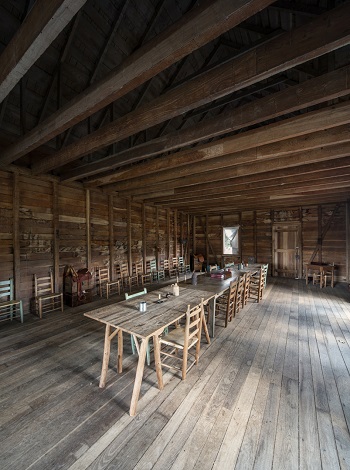 The stately oak trees gracing the grounds of Washington-on-the-Brazos State Historic Site are a testament to the site’s noble heritage. It’s easy to imagine the fathers of Texas gathering beneath the shade of these outstretched trees while forging the principles and documents that would define the Republic of Texas. These ideas were officially set in place at the site’s Independence Hall, where 59 delegates signed the Texas Declaration of Independence on March 2, 1836.

A 1971 replica of the hall gives visitors a sense of the era’s vernacular architecture and Texas’ humble beginnings. The town of Washington, which hosted the last Congress of the Republic of Texas, grew to become a modest community of 1,700 with riverboat trading on the nearby Brazos River. It later declined in population, and its buildings were eventually dismantled and lost to a wildfire in 1912.

The Star of the Republic Museum

This star-shaped Star of the Republic Museum showcases the history of the Republic of Texas and social heritage of area inhabitants from American Indian tribes to settlers of the 1800s. 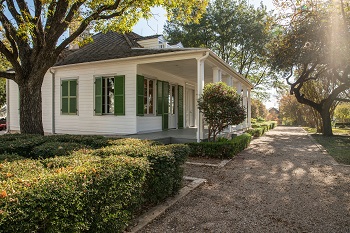 After the fall of the Alamo, Col. James Walker Fannin—with about 400 soldiers, mostly volunteers from the U.S. in the Texas War for Independence—was ordered by Texas Gen. Sam Houston to retreat from Goliad to Victoria. The heavy Mexican force of General Urrea surrounded the withdrawing Texas contingent near Coleto Creek, and bitter fighting ensued. Fannin's volunteers hurled back the assaults of the Mexican force.

Our Fannin Battleground State Historic Site memorializes the brave soldiers who fought the Battle of Coleto Creek. After Fannin surrendered to Mexican forces, Mexican Gen. Santa Anna ordered him and his men executed in nearby Goliad, against the wishes of other Mexican commanders. The surrender, and unanticipated execution, inflamed the Texas cause, spurring the battle cry “Remember Goliad!”

The Texas Historical Commission preserves and operates 32 state historic sites across Texas. These unique places honor Texas history and inspire an understanding of what it means to be a Texan. Read more about our sites and other Texas history stories in our agency’s magazine The Medallion.