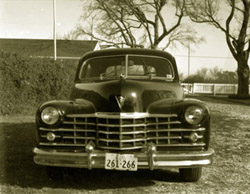 After losing the speaker position in 1947, Rayburn also lost the use of a congressionally funded 1944 Cadillac, used as the official speaker’s limousine. While Rayburn remained positive about his new role in Congress, his fellow Democratic congressmen could not bear to see their beloved former “boss” without a car.

Several Democratic congressmen desired to buy Rayburn a new car to replace his limousine. Rayburn said he had a personal rule barring him from accepting gifts over $25. Undeterred, the congressmen asked the Democratic faction of the House of Representatives to donate $25 toward a new car. The former speaker, embarrassed to have been outsmarted, grudgingly agreed to their plan. Rep. Frank W. Boykin of Alabama led the solicitation.

Along with the 142 Democratic donations, 50 Republican representatives donated to the Cadillac fund. The congressmen purchased a new 1947 Cadillac Fleetwood for $3,600 in donated checks and presented the keys to Rayburn during a ceremony officiated by his good friend and Democratic Whip John McCormack. 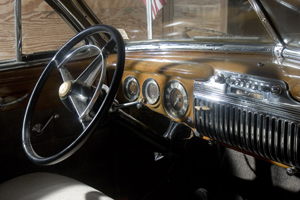 Rayburn learned several Republicans donated money toward the purchase of the car and insisted the donated money, $1,250, be returned. He felt that accepting money from Republicans might be construed as a conflict of interest. Rayburn graciously thanked each Republican for his donation and returned each check.

Rayburn used the 1947 Cadillac from 1947 through 1949, when he was again elected speaker. H.G. Dulaney, Rayburn’s secretary and future director of the Sam Rayburn Library, was the last person to drive the Cadillac from Washington, D.C. to Bonham in 1955, after Rayburn reclaimed the speaker’s chair and use of the official limousine.

Read more about Rayburn's Cadillac on the See the Sites blog.

Ages 5 and Under
Free