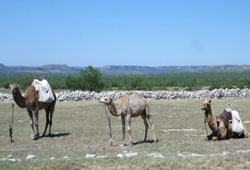 Fort Lancaster, established in 1855, was built to protect travelers along the westward (San Antonio-El Paso) road. By July 1857, after being stationed at Fort Lancaster for nearly two years, the 1st U.S. Infantry soldiers at Fort Lancaster had become familiar with the local landscape, wildlife, and Native Americans of the region such as the Apache. But they were not prepared when camels arrived at the fort. The camels, part of the U.S. Army’s Camel Experiment, are a unique chapter in Fort Lancaster’s history.

In 1848, after the Mexican-American War ended, new territory and the discovery of gold in California drew Americans west. Many traveled through Texas along the San Antonio–El Paso Road. The U.S. Army built forts along the road, including Fort Lancaster in 1855, to protect westward travelers from the Native Americans. Most of the American Southwest consisted of desolate terrain with limited water resources. Recognizing this, some Army officers and politicians supported the idea of experimenting with camels as pack animals instead of horses and mules.

In 1856 and 1857, the USS Supply brought two groups of camels from Africa and Asia to the Texas port of Indianola. The camels, around 75 in total, were headquartered at Camp Verde near San Antonio. The camels would conduct several expeditions testing their effectiveness in the American Southwest.

The first camel expedition was led by Lieutenant Edward Beale. Lt. Beale departed Camp Verde on June 24, 1857. His expedition consisted of 25 camels along with horses, mules, personnel, and wagons. They traveled along the San Antonio–El Paso Road and stopped at Forts Inge, Clark, Lancaster, Davis, and Bliss. At Fort Clark, Captain Arthur T. Lee and his Fort Davis bound escort joined the expedition.

Lt. Beale was optimistic about the use of the camels. After leaving Fort Clark he commented, “The camels are doing better today, and arrived shortly after the wagons. I am very much encouraged to see how eager they seek the brush for food instead of grass, which certainly indicates their ability to subsist much easier than horses and mules in countries where forage is scarce.” 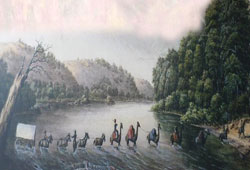 The camel caravan continued west crossing the Devils River while en route to Fort Lancaster. Lt. Beale wrote, “The more I see of them the more interested in them I become, and the more I am convinced of their usefulness. Their perfect docility and patience under difficulties renders them invaluable, and my only regret at present is that I have not double the number.”

It must have been a striking sight as the camel caravan neared Fort Lancaster. At sunrise on July 9, 1857 they arrived atop a hill overlooking the creek. Lt. Beale described the scene: “Just before descending into the valley of the stream we came to a very steep, rocky hill, overlooking a valley of great beauty and graceful shape. The sides of the hills were covered with the most brilliant verdure and flowers, and our long train, as it wound down the steep descent, and became stretched out on the winding road through the valley, presented a scene of uncommon beauty.”

The camel caravan descended and camped along Live Oak Creek where Lt. Beale wrote, “We traveled 15 miles and encamped two miles from Fort Lancaster, on Live Oak creek. While at breakfast, some of the officers called and invited us to the post, of which kindness we shall avail ourselves.” 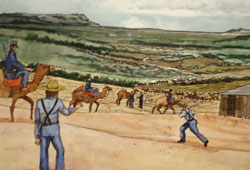 The expedition spent several days resupplying, mending saddles, and grazing their animals. On departure day, the expedition passed through Fort Lancaster and allowed the entire garrison to view the camels. To the soldiers of Fort Lancaster this was no common wagon train. The visit broke the soldiers’ monotonous routine and was probably the first time any of them had seen camels. Captain Stephen D. Carpenter, Company H Commander, rode one of the camels. May Humphreys Stacey, a member of the camel expedition, recorded the occasion: “Our Camels attracted much attention, the whole garrison turning out to see them. Captain Carpenter after being invited to try one, by Mr. Beal, mounted and took a short ride. He expressed himself much delighted at the gait and said that after one became used to the motion; he would prefer the camel to a mule.” 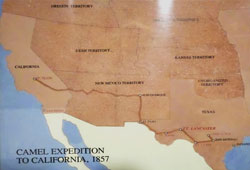 Seeing camels in the American West was a unique opportunity. Numerous settlers, travelers, and soldiers witnessed the camels during their journey. There were differences of opinion regarding the camels. Captain Arthur Lee wrote, “Camel caravans, however picturesque and imposing they may appear to the travelers eye on eastern deserts, were not beautiful to the beholder on the wild plains of Texas.”

Lt. Beale noted their effectiveness: “My Admiration for the camels increases daily with my experience of them. The harder the test they are put to the more fully they seem to justify all that can be said of them. They pack water for others four days under a hot sun and never get a drop; they pack heavy burdens of corn and oats for months and never get a grain; and on the bitter greasewood and other worthless shrubs not only subsist but keep fat; withal they are so perfectly docile and so admirably contented with whatever fate befalls them… I look forward to the day when every mail route across the continent will be conducted and worked altogether with this economical and noble brute.” 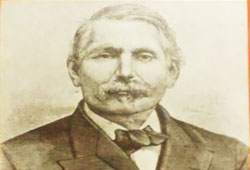 In 1861, the American Civil War began and the U.S. Army withdrew all troops from Texas, leaving the camels behind at Camp Verde. The State of Texas and the Confederacy took over, and used the camels to move cotton and supplies to the Texas coast. After the war many of the camels were sold to private citizens, merchants, and landowners. Eventually, the railroad replaced animals for carrying freight across the west.

The U.S. Army Camel Experiment (1855-1861) left a legacy and reminds us of the pioneering spirit of those who braved to go west. What a fascinating sight it must have been to behold those visitors from afar.