For nearly a millennium, humans have been called to the bluff overlooking the Colorado River near present-day La Grange. Perhaps indigenous Americans and later European settlers used the Bluff to survey the territory that would become Fayette County. Post-statehood citizens chose the Bluff as the final resting place for Texas soldiers who died in service to the Republic. Still today, families gather on the Bluff for picnics, reunions, weddings, and other celebrations. Maybe it’s the view, its geographical prominence, or an indescribable sense of place that has attracted our ancestors and our families to the Bluff for so long. Yet it’s no wonder that early German Texans chose this location as their gathering place for the Bluff Schuetzenverein. 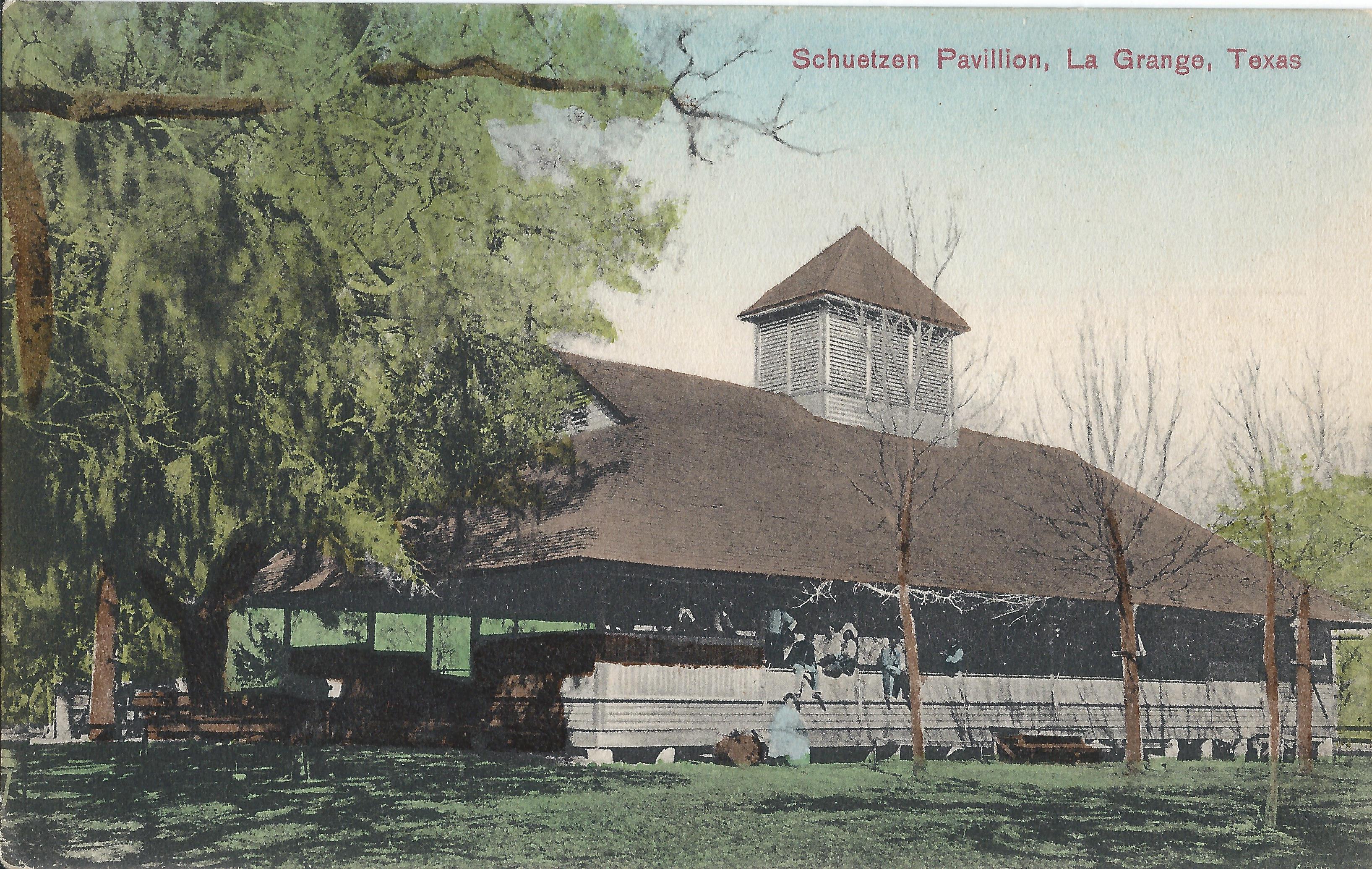 Schuetzenvereine (plural for Schuetzenverein), or marksmanship societies, originated in 12th century Europe. Towns formed militia groups to prevent riots and provide defense against foreign enemies. Most societies were well-organized with formal traditions, patron saints, regalia, and banners. Schuetzevereine also hosted annual festivals, or Schuetzenfests, that may have been analogous to our county fairs today.

Many German immigrants brought their Schuetzenverein traditions to the US in the 19th century. The first American Schuetzenverein was organized in Philadelphia in 1846. Other Schuetzenvereine quickly popped up in and around large German-American population centers. The clubs often established community centers, many of which were quite extravagant. In addition to a shooting range, some clubs had dance halls, music pavilions, refreshment stands, picnic areas, athletic fields, parks, and even zoos and roller coasters. By contrast, our Texas Schuetzenvereine were a little more modest—often simple wooden structures where German Texans could socialize and practice their marksmanship. No matter their size, all Schuetzenvereine had two things in common: a place to shoot a gun and a place to drink a beer.

Beginning in the 1870s, the Bluff Schuetzenverein leased property from the Kreische family and constructed a shooting range and dance pavilion just yards from the tomb of Dawson and Mier expedition soldiers. A concession stand was also constructed from which Kreische likely sold his Bluff Beer. 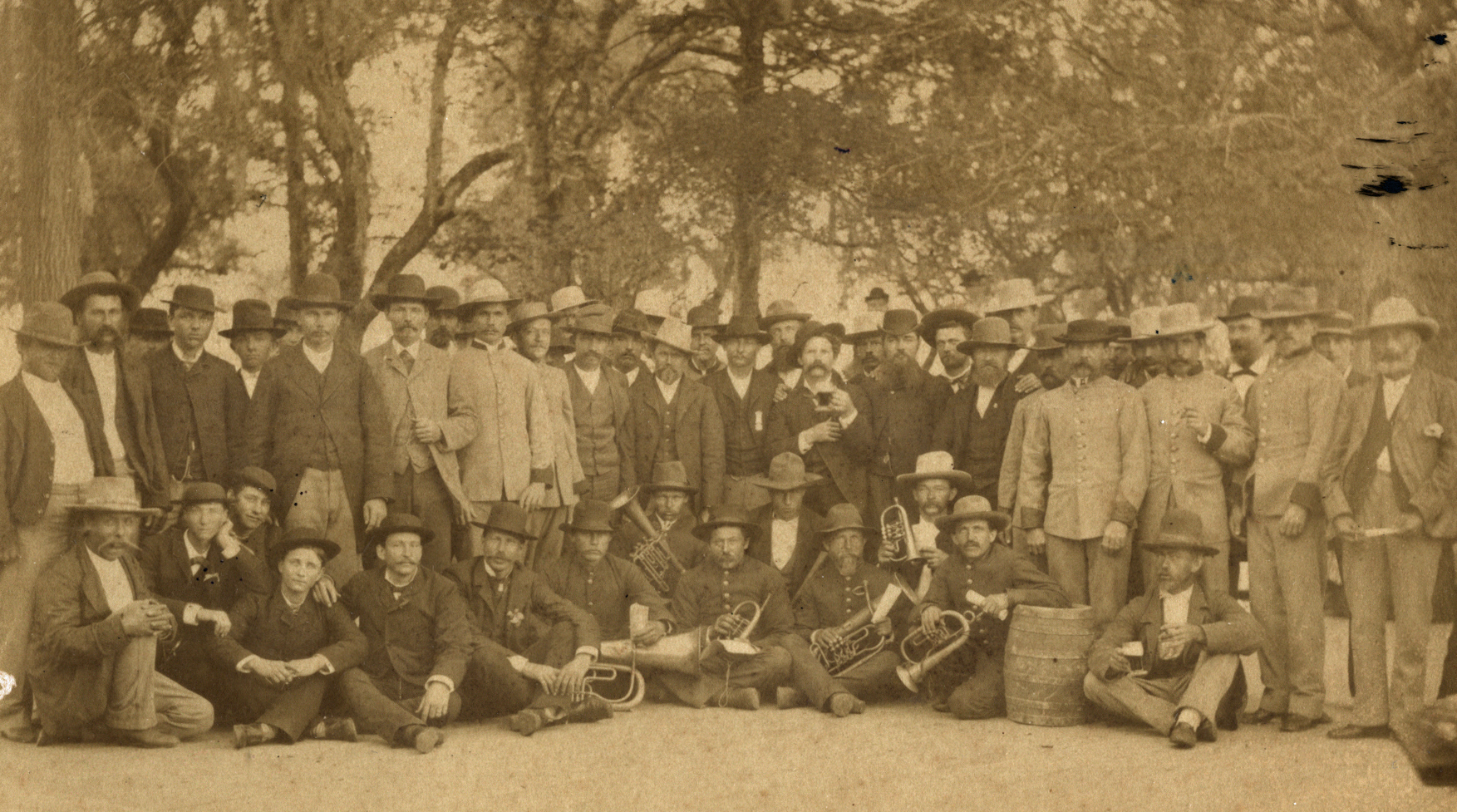 As a club rooted in marksmanship, the Bluff Schuetzenverein organized shooting competitions throughout the year. Their largest annual competition, known as the King Shoot, was typically held in late May or early June. Competitors came from as far away as Galveston to participate. At King Shoots, participants fired three shots at wooden targets with 12-13 hand painted rings. The person who scored the most rings was crowned King for a year. Tradition has it that the King was required to buy a keg of beer to share among his fellow competitors. King Shoots and other shooting competitions didn’t end when the last shot was fired. Celebrations often ensued with picnicking, refreshments (namely beer), dancing, and just a good old time.

Families also gathered around the Schuetzenverein pavilion for community picnics and holiday celebrations. Newspaper articles recount festive commemorations on San Jacinto Day and July 4th, among others.  For decades, local residents reflected nostalgically upon the Easter egg hunts where thousands of boiled eggs were dyed and scattered about the grounds surrounding the Schuetzenverein pavilion.

The Bluff became a favorite gathering place among German-Texans as the Schuetzenverein provided a place to preserve and share German heritage in Texas. The German language was widely spoken, German music was commonly heard, and German holidays were regularly celebrated. However, the Schuetzenverein also helped immigrants and their families transition to life in Texas and the US. Members introduced each other to potential business partners outside the German community. The society united around uniquely Texas and American holidays like San Jacinto and Independence Day. The Schuetzenverein joined other German organizations as players in American politics by encouraging voter participation and advocating against prohibition in the early 20th century. As anti-German sentiment rose in the wake of WWI, the Bluff Schuetzenverein recognized the need to fully embrace their Texas home by adopting English as the official language of the society.

With the ban of alcohol sales at the onset of Prohibition in January 1920, Schuetzenvereine across the country struggled to provide the atmosphere that had been traditionally enjoyed for two generations. The Bluff Scuhetzenverein continued to offer dances and other gathering, though with limited offerings at their concession stand. Attendance ebbed and flowed over the next few years, so the Schuetzenverein sold the structures on the Bluff in 1928. A neighbor removed the structure and repurposed the lumber for a house and farm structures. The society faded into memory and the sounds of shooting competitions, brass bands, and communal gatherings fell silent on the Bluff. But not forever…

Inspired by the rich history of the Bluff Schuetzenverein, the Friends of Kreische Brewery & Monument Hill State Historic Sites have revived and reimagine many of the society’s traditions at the annual Bluff SchuetzenFest in May each year. The event features live German and Texas music, his 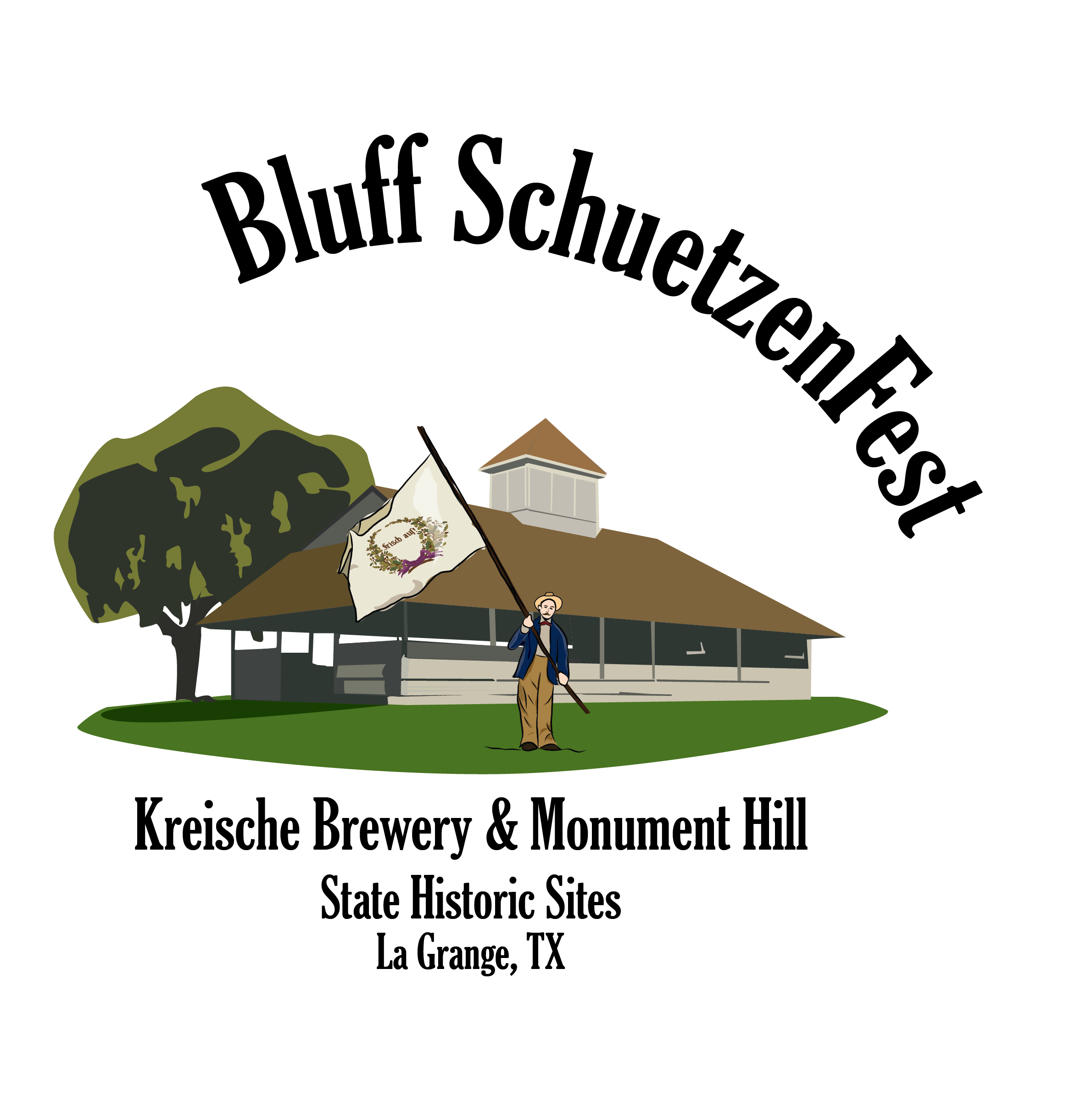 torical games, a shooting gallery with a modern twist, living history activities, community booths, special tours and programs, food and drink, and more. Bluff SchuetzenFest also includes Texas History on Tap where ticketed guests can sample a variety of Texas craft beers, meet the teams behind some of Texas’s most celebrated breweries, enjoy German food, and dance the night away to live music.

For more than 50 years, Bluff Schuetzenverein gatherings were renowned for their ability to unite the community and distract from the challenges of everyday life. “Young and old have gathered there and forgot their business cares and worries for the day,” reported the La Grange Journal in February 1921. More than a century later, the former grounds of the Bluff Schuetzenverein will be enlivened in this spirit once again as the community gathers for a new annual tradition, the Bluff SchuetzenFest.

Admission fees are required to access all indoor and ourdoor public areas.

Plan to come often? Please ask about membership in our Friends group.

Pets on a leash are welcome.