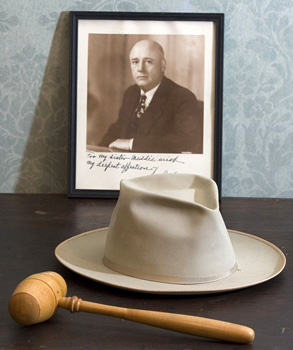 Sam Rayburn’s political career began when he won a seat in the Texas House of Representatives in 1906; he was 24 years old. While in Austin serving in the legislature, Rayburn attended and graduated from law school at the University of Texas. After two terms, Rayburn was re-elected to serve as speaker of the Texas House at age 29.

In 1912, Rayburn made his first run for the U.S. House of Representatives. After winning that election, the lifetime Democrat never again faced a Republican opponent. He arrived in Washington, D.C. just in time for the inauguration of Woodrow Wilson in 1913. Wilson was the first of eight sitting presidents Rayburn would work with during his tenure in the U.S. House.

Rayburn was closely connected to the 36th president, Lyndon B. Johnson, though Johnson did not become president until after Rayburn's death. Rayburn, who served with Johnson's father in the Texas Legislature, was a mentor to the future president and was one of the strongest proponents of the Kennedy/Johnson Democratic ticket in 1960. Two years after Rayburn died, Johnson became president when Kennedy was assassinated in Dallas in November 1963.

During his 48 years in the House, Rayburn served as minority leader for four years, majority leader for three years, and speaker for 17 years. His legislative contributions are hard to reduce to specific categories. While a lifetime Democrat and party loyalist, Rayburn tended to be middle-of-the-road on most issues, and he wasn't afraid to act independently or cut across party lines when he felt strongly about a particular issue. His fairness and mastery of the political process earned him respect from both sides of the House floor.

After serving as a U.S. Congressman for several years, Rayburn saved enough money to build a home for himself and his family. In 1914, he purchased 121 acres of land two miles west of Bonham. By 1916, construction of his two-story clapboard home was complete. The surrounding farmland produced cotton, corn, and sorghum crops and provided pastureland for cattle.

Rayburn’s later additions to the home included several rooms and porches. He used his own money to pay the electric company to erect poles and run electric lines to his home in 1935.

Over the years, the farm would be home to various family members. Having been briefly married and divorced, Rayburn never had children of his own, but treasured the time spent with the younger generation of Rayburns. Rayburn's parents, his brother Tom, and sister Lucinda moved into the home soon after it was built. Throughout his congressional tenure, Rayburn traveled from Washington, D.C. to his Fannin County refuge to relax amid familiar hometown faces and enjoy the pleasure of working on the farm or on his nearby 900-acre ranch.

After his death, his home, land, and possessions were left to the Sam Rayburn Foundation, which deeded the home to the state in 1972. The home opened as a museum administered by the Texas Historical Commission in 1975.

Ages 5 and Under
Free