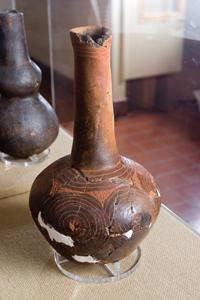 One of the most distinctive characteristics of Caddo culture was their pottery, which encompassed many different styles and forms over a span of about 1,000 years (A.D. 800–1800). When archeologists study sites today, this pottery is key in identifying whether it was the Caddo who lived there. Caddo pottery is the prime evidence used to identify and date Caddo sites.

The tradition of making pottery was strong and likely passed from mother to daughter, or aunt to niece. The most common shapes were jars and carinated vessels, which flare out from the base and then angle inward toward the rim. Pottery was fired in an open fire rather than a kiln. Caddo pottery varied in color from grays and blacks to oranges and reds, depending on the temperature of the fire in which the pot was fired, the type of clay used and whether the potter applied a clay slip.

During the Early Caddo period (A.D. 800–1200), vessels commonly used a temper (a material that strengthens the clay) made of bone or the broken pieces of other pots. Vessels were made by coiling the clay — rolling it out into ropes and stacking it on top of one another. The coils were then smoothed out so that they could not be seen. Much like today, there was pottery for everyday use and pottery for special occasions. The everyday pottery was typically not decorated, while the pottery for special occasions was commonly decorated with incised (drawn into wet clay) lines forming complex circular and rectangular designs that covered a large portion of the vessel.

The Middle Caddo period (A.D. 1200–1400) heralded an explosion of variety and creativity in pottery styles. It was a time of individual expression and experimentation in Caddo pottery. Although there are very few pieces that can be assigned to a definite Caddo style, the two stylistic consistencies throughout this time were highly ornate designs and the addition of handles to vessels. From this point on, decorations include appliqués (clay additions to the outer surface that are elevated and form a design), engraving (removing clay when the vessel is dry but not fired), burnishing (polishing with a stone to give it shine) and slip (a thin layer of watery clay put over a vessel before it is fired to hide imperfections and change the color). The increased complexity of these styles required that vessels, or portions of vessels be “cured” (left to sit for a few days in a wet hide) to either improve the strength of the base so it wouldn’t collapse under the weight of the top half, or to prepare it for engraving and appliqués. 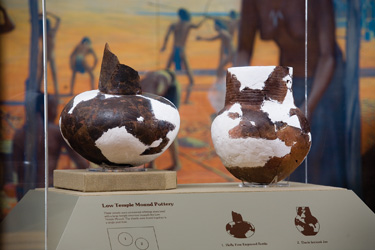 In the Late Caddo period (A.D. 1400–1680), these trends continued with wide variety in style and decoration. At this time, effigy bowls, salt pans and rattle bowls were also produced. Within this period was a subculture known as the Titus phase (A.D. 1430–1680), during which the differences between fine wares and utility wares became more distinct. Fine wares, which are often found at cemeteries as grave offerings, were made with thinner walls, both an exterior and interior slip, more polishing, and incised and engraved lines painted with red ochre or white kaolin. Utility wares, which are usually found at settlements, were made with coarse clay, had thick walls and neck banding (flattened rather than smoothed coils), were brushed and punctuated to provide grip, and were mostly in the form of jars and conical bowls with lugs (handles).

The focus on pottery among the Caddo all but disappeared as they came into more frequent contact with Europeans, gaining pottery through trade and using metal pots acquired from Europeans rather than making clay pots. The last traditional Caddo pottery was likely made in the 1850s on their Oklahoma reservation. However, recently there has been a revival of the tradition, and some Caddo have begun to make pottery utilizing the same designs as their ancestors.