Acknowledging death through ritual is a cultural universal, a common experience, that we share with the Caddo ancestors who lived more than 1,000 years ago at what is now Caddo Mounds State Historic Site. These early Texas residents are the ancestors of the modern-day Caddo people, and perhaps somewhere in the overlap of the archeological, historical, and cultural records lies the key to the meaning behind the burial practices of the prehistoric inhabitants of Caddo Mounds.

What we know about the material life of these early Caddo we owe to the fieldwork and research of archeologists. Since the late 19th century, archeologists have studied the remains of daily activities of the site’s inhabitants, such as cooking, house and monument building, farming, art and tool making, and the materials involved in war and honoring the dead. More investigations have been carried out at Caddo Mounds than any other Caddo site in Texas!

While archeologists have taught us about the physical remains of the site’s residents, learning about their culture and traditions involves a web of proposed hypotheses that compare similar cultures, archeological research, clues preserved in historical records, and the oral traditions of their living legacy.

Excavations of the burial mound (Mound C) at the site began in the late 1960s. The early Caddo used the burial mound as the gravesite for the elite members of the community. It was built in stages and contained deep shaft-like burial pits, some of which contained multiple internments and a number of exotic offerings.

More recently, non-invasive magnetometer surveys at Caddo Mounds have detected structures and additional burials on the property. These additional burial sites may have served as family and community gravesites. While the archeology documents how people were buried during the time they lived at the site, we do not have records that explain the meaning of mortuary rituals and associated grave goods. To help us understand the burial rituals and customs of the early Caddo, we look for clues in the evolution of these ceremonies throughout the historical record. 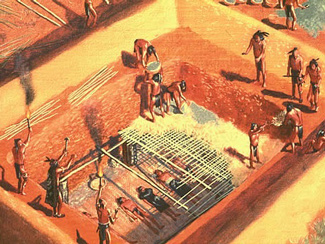 Pictured at right is an artist's depiction of an elaborate burial tomb dating before 1,000 years ago, based on one documented by archeologists beneath Mound C at the site in 1969. Eight individuals were laid to rest in this tomb and were accompanied by various grave offerings including a ceremonial flint "sword" blade that symbolized authority. One interpretation is that the individual buried with the blade was an important leader. The other seven people may have been retainers, slaves, or family members sacrificed to honor the departed leader. Similar tombs are known from other ancient Caddo sites, especially those dating to the early Caddo era (about A.D. 800-1200).

Many Caddo traditional stories were recorded in 1905 by ethnographer George Dorsey. Within these stories are clues to the mortuary beliefs and rituals of the Caddo people. The following are examples:

It is fascinating to see where history, modern culture, and mythology connect. In her book, Caddo Indians: Where We Come From (pg. 87), Cecile Carter wrote:

"The Hasinai believed that when a person died, his or her soul went to another house where a man guarded everyone who came until all were gathered together. Once all the souls were together, they would enter another world, where life would begin anew. To let the master of the house know that someone was coming, they shot arrows into the air and cried, ‘Here he comes! Make him work until we are all united.’ Because a person needed strength to reach this house and was weak from hunger and at death, they buried all the person’s arms and utensils with the body and for several days carried something to eat to the grave."

While it is intriguing to look at the early Caddo through a historic lens, it is important to understand the many elements that color this understanding. For example, the Caddo myths and our primary accounts of Caddo culture come after European contact and the arrival of the Spanish missionaries and are also impacted by the blending of cultures during the Native American removal from Texas. One apparent change in burial practice is the orientation of internments. After contact, burials faced an east-west direction, while the archeology of early Caddo sites describes more north-south internments.

Regardless of the unknown elements of the burial rites of the early Caddo, we can be sure that, like all of us, they participated in the cultural universal of acknowledging death through ritual. Below is a poem written by Guyneth Bedoka Cardwell (Caddo) that beautifully ties together the Caddo rituals surrounding death preserved through history, story, and continued practice.

Moccasin my feet
clothe me in ribbon and cloth
my journey home has come
Sing to me of peace
and bid me farewell, talk to me
as you usher me homeward
Cover me with mother earth
hand full by hand full
your farewells are accepted
As you wash your grief away
the gentle rain removes my
traces upon the earth
Stand not to the East
bar not my journey home
my riverward path
The river I must cross
is dark and rough
prepare my moccasin feet
that I might cross swiftly
Light the way for me
with torch of fire
for six days and nights
light my journey home

Dorsey, George A., 1997, Traditions of the Caddo, Washington D.C., University of Nebraska Press.