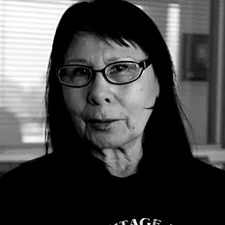 First Lady Michelle Obama selected Redcorn’s “Intertwining Scrolls” pot for display in the Oval Office. The artwork is a traditional Caddo design from more than 300 years ago.

The Smithsonian, the Oklahoma Museum of History, Spiro Mounds, and the Bob Bullock Texas State History Museum permanently display her work. Caddo Mounds has always been a special place for Redcorn. When the old replica Caddo House was burned in 1996, she participated by holding the torch to the grass house.

Redcorn has lectured at the Smithsonian, the Art Institute of Chicago, Yale University, Illinois University, and the White House Institute of Museum and Library Services conference. Her story was shown in “Arkansas’s FIRST PEOPLE” on AETN, Arkansas. The documentary is the companion series to WGBH/PBS, “We Shall Remain.” 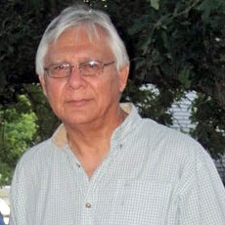 Phil Cross was raised on his family’s Caddo Indian allotted land in western Oklahoma. He is a member of the Caddo Indian Nation and the Caddo Culture Club of Binger, Oklahoma.

During the past 20 years, Cross has specialized in the history of American Indian tribes in Texas, Louisiana, Arkansas, and Oklahoma. An avid big game hunter with his Caddo bois d’arc bow and arrows, he conducts workshops on Indian archery for a variety of groups across the U.S. He is also knowledgeable on the use of stone tools for carving wood artifacts, and experiments with their use in his work.

In 1991, Cross designed and built camps of Caddo Indians, Woodlands Indians, and Plains Indians for the living history American Indian Villages in Choctaw, Oklahoma. The project included constructing various structures and replicating artifacts for each camp as well as preparing narratives, actions, and material for the reenactors’ presentations. The Caddo camp featured a grass-thatched house and arbor, food, and clothing. The Plains Indian camp production included tepees and a group of warriors fully dressed in regalia and mounted on paint horses.

In 2000, the Sam Noble Oklahoma Museum of Natural History at the University of Oklahoma commissioned Cross to construct the Mississippian housing exhibit, which included carving a replica of an ancient Caddo canoe found near Shreveport, Louisiana.

Over the years, Cross has lectured and authored a number of documents on the history, crafts, and traditions of Caddo Indians. A graduate of Oklahoma State University with a degree in mechanical engineering, Cross spent many years working as an aerodynamics engineer in the defense industry and as an engineer/technical writer for utilities and automotive companies. He served Indian tribes and organizations for several years in social and economic planning and development. 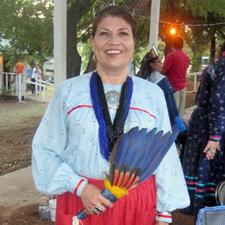 Yonavea Hawkins (Caddo/Delaware) has enjoyed drawing and painting since grade school, and graduated with a degree in fine arts and mass communications from Oklahoma City University. Since then, she has won awards for her drawings and beadwork. At Red Earth 2010, she placed with her Delaware moccasins, and in 2011 she placed with her Caddo moccasins in the beadwork category.

Hawkins learned to sew Caddo and Delaware dresses from her mother and is self-taught in making Caddo shirts for her sons. For other Native Americans, she has sewn Osage straight dance ribbon work and Kiowa children’s clothing. She also knows how to make a dushtuu (Caddo hair ornament), beaded collars, shawls, and moccasins from her enjoyment of Caddo dances and her experience as head lady dancer at pow-wows. Not limiting herself to just sewing and painting, Hawkins does loom beadwork to create bracelets, barrettes, belts, and hatbands as well as peyote stitch beadwork on fans and gourd dance sashes.

Professionally, Hawkins has worked as an art director and as a print buyer for advertising agencies, and has held positions as publishing director and production manager for publishing companies. While working for an arts and crafts publishing company, she co-authored decorative painting books and created designs for the industry. After her first book was published, she was sought by a painting magazine to create a design for their publication.

Hawkins says, “Visiting Caddo Mounds is an opportunity to reconnect with the past and to educate others that even now the Hasinai are still maintaining their culture and traditions.”

Michael Meeks: My Life in a Caddo Society 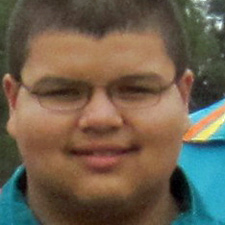 Qua-ah-haht! Ku-Kumba-kehaut Michael Meeks. In the Caddo language, that means, “Hello, my name is Michael Meeks.” I am a junior at Lookeba-Sickles High School in Lookeba, Oklahoma, and am currently the secretary of the Caddo Culture Club, an organization dedicated to the preservation of Caddo songs and dances.

When I was 6 years old, my dad had the idea of starting a club that focused on teaching young Caddo boys the songs that the Caddo people loved so much. With the help of two Caddo elders, Charlene Wright and Thurman “Sonny” Parton, that idea quickly became a success. The group was name Shuuwii-Ti-Ti, which in Caddo means “young men” or “young warriors.” This group travels to much of the Caddo’s original homelands, including Texas, Louisiana, and parts of Oklahoma. After several years, my dad thought that these young men, who had learned the Caddo songs so well, could merge with the Caddo Culture Club. At the time, Parton was the club’s chairman, so he favored this idea strongly.

Unlike other Caddo boys, I did not attend any camps that taught the ways of the Caddo. I learned everything I know today through the help of my dad and my grandfather Buntin Williams, a highly respected Caddo elder. Both men encouraged me to learn these songs because there were not many people left who wanted to take on this responsibility.

Today, my heritage has become my number one priority, aside from my education. Since I attend a small school, my friends know that my cultures and beliefs are different from theirs, but they strongly favor them. They find these traditions as interesting as anyone else would, which lets me know that I should carry these traditions on, for this is what my grandfather wanted.

Our vice-chairman of the Caddo Culture Club is Travis Threlkeld. Travis is not only my cousin, but an original member of the Shuuwii-Ti-Ti drum group. It is good to know that Travis and I are now part of the very group that helped influence our Caddo heritage so much. I am honored to travel with this group wherever it may go to show others that the Caddo people are still here and that their traditions are stronger than ever.