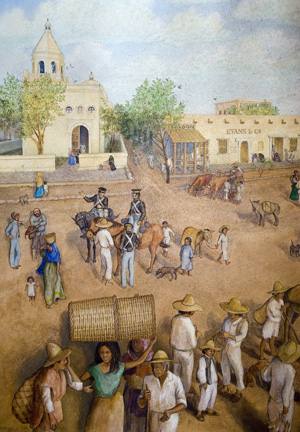 José Antonio Navarro was an influential political figure during the momentous 55 years (1810–1865) when Texas’ destiny was forged. Navarro served in Texas legislatures under Mexico, the Republic of Texas and the state of Texas. In addition, he served on the committees that wrote the first two Texas constitutions in 1836 and 1845.

Although a prominent, influential leader, Navarro was not a professional politician. As a young man he learned the merchant trade, the occupation of his father. Factories from the United States and Europe sent ships loaded with merchandise to New Orleans, where Navarro arranged to import books, cloth, clothing, wine, sugar, rice and coffee.

Navarro also earned a living through land investment. During the 1830s, he purchased more than 50,000 acres of ranch land at a price of pennies per acre. Because thousands of people were immigrating into Texas, the demand for land increased. Navarro sold portions of his land holdings for up to three dollars per acre. His San Antonio rental properties also produced income.

His wife Margarita de la Garza was also a native of San Antonio. Between 1817 and 1837, she bore four sons and three daughters. Numerous descendants live in and around San Antonio, with many more scattered throughout the country.