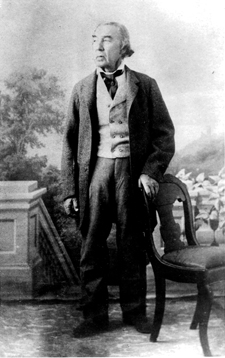 José Antonio Navarro was born in San Antonio on February 27, 1795 to a family of means and political connections. He was the eighth of 12 children, six of whom lived to adulthood. His father, Don Angel Navarro, was a self-made man from Corsica who went from being a runaway and servant to becoming a successful merchant and Alcalde of San Antonio (a political position that included being mayor, sheriff and judge). Navarro’s mother, Maria Gertrudes Ruiz, was a native of San Antonio and of aristocratic descent.

Navarro’s father died in 1808, and at the age of 13, he returned from school in Saltillo, Mexico to help support the family. When he was 18, he fled to Louisiana to avoid the Spanish rule in San Antonio, returning home to Bexar three years later. On his return, he found his mother and family nearly destitute and immediately set out to find work to support them. Navarro was largely self-taught, and he became a successful merchant, rancher, politician and land investor. He married Margarita de la Garza y Flores, a native of San Antonio, and they had four sons and three daughters.

Before Texas independence, Navarro was elected to both the Coahuila and Texas state legislature and to the federal congress at Mexico City. He supported Texas statehood in 1835 and embraced the idea of independence the following year. Navarro was one of the three Mexican signers of the Texas Declaration of Independence along with José Francisco Ruiz and Lorenzo de Zavala. He was elected to the Texas Congress as a representative from Bexar and sought to advance the rights of Tejanos, whom many Anglo-Texans held in contempt after the Texas Revolution.

In 1841, Mirabeau Bonaparte Lamar, president of the Republic of Texas, organized the Santa Fe Expedition. His plan was to incorporate eastern New Mexico into the Republic of Texas. Navarro did not favor the plan, but against his better judgment was persuaded by Lamar to remain as a commissioner of the expedition.

The Santa Fe Expedition ended in disaster; Navarro and the other members of the expedition were taken prisoners by the Mexican authorities. Many did not survive the grueling and punishing 2,000-mile march to Mexico City. Navarro underwent intense interrogations by Mexican authorities and was offered freedom and a government position if he would renounce his allegiance to Texas. He steadfastly refused to betray his homeland and was convicted of treason and sentenced to death.

The Military Supreme Court commuted his sentence to life imprisonment. Santa Anna had Navarro transferred to the most dreaded prison in Mexico — the infamous San Juan de Ulúa in the Port of Vera Cruz. Navarro spent four years in the brutal dungeons, enduring miserable and torturous conditions. In 1844, Santa Anna was overthrown and in early 1845 Navarro managed to escape aboard a ship from Vera Cruz to Cuba. From Cuba, he sailed to New Orleans and then Galveston, arriving back at his San Geronimo ranch on February 18, 1845.

At 50 years of age, Navarro was finally home. He was welcomed as a true hero and earned immense respect from the people of San Antonio and Texas. Navarro County, Navarro Street and numerous public schools are named in honor of his heroic patriotism and leadership.

For the next 26 years, Navarro’s leadership and passionate quest for liberty significantly influenced the course of Texas history. He was the sole Tejano delegate to the Convention of 1845 determining the United States’ annexation of Texas, which he supported. He also contributed to the Constitution of 1845, the first state constitution. He was subsequently twice elected to the state Senate, but retired from the legislature in 1849.

During his retirement, Navarro wrote several historical and political articles for the San Antonio Ledger. In 1854, Navarro publicly opposed the “Know Nothing Party,” officially known as the American Party. The group felt threatened by immigration from Catholic countries; consequently the party was anti-Catholic and anti-immigration. It operated as a secret society and in response to inquiries about their activities the members would repeat such denials as “I don’t know, I don’t know anything,” resulting in their nickname. The party gained major victories in Texas and San Antonio, and Navarro helped to create an informed electorate that delivered defeat of the Know Nothing Party at the polls in Texas in 1855.