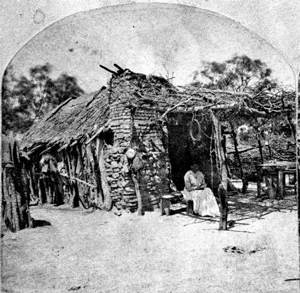 Tejanos relied heavily on Texas’ natural environment to supply them with materials for building homes. Many homes built by Tejanos are known as jacales, rectangular structures with walls made from trimmed mesquite limbs and filled with mud or plaster in between posts. Roofing was made from reeds, straw, or thick grass, depending on availability, and flooring was typically compacted dirt depressed only a few inches below the threshold. Jacales took little money to build, lasted long periods of time, and were efficient in cooling and heating throughout the year.

Margarita de la Garza, wife of José Antonio Navarro, described living in a jacal made of palos y cascara (sticks and bark) with her mother into adulthood. In comparison, Navarro was raised in a casa mayor (fine home) constructed of limestone block, that sat only a few blocks away.

Tejanos of privileged backgrounds utilized the environment in a different manner, opting to make their homes from adobe or stone cut from nearby quarries. Adobe home construction in Texas was a craft perfected over several centuries by Spanish and Native Americans throughout Northern Mexico and Texas. A varied mixture of clay, topsoil, grass, powdered lime, and water was placed into rectangular forms and left to dry in the sun. The dried bricks were stacked to make walls one-story high and typically measured 2–3 feet in thickness. The adobe bricks were then covered with a coat of plaster and whitewash made from cactus mucus and hydrated lime to protect them from the elements. 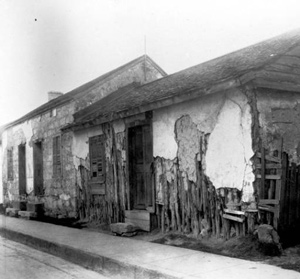 In 1832, Navarro purchased the property at the corner of Laredo and Nueva Streets, now Casa Navarro State Historic Site. He did not reside at the property regularly until his home and the two-story mercantile building were completed in the mid-1850s. All three buildings on-site are examples of adobe architecture common in San Antonio during the mid-19th century.

The main home was originally built one room deep and one story in height, common for adobe construction, and likely had a vaulted ceiling with cedar shingles for roofing, similar to the mercantile and kitchen buildings. Distinctly Texas Colonial in styling, the symmetrical positioning of the doors, windows, and porches of the main home provided adequate air circulation and shade during the summer months while the fireplaces and earthen bricks kept the home warm in the winter. Three rooms were added to this building at a later date, but designed to match the pre-existing styling of the home. 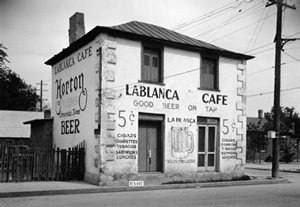 Also in Texas Colonial architectural styling, the mercantile building is a rare example of a two-story adobe structure incorporating cut limestone quoins. The building likely functioned as a storefront and warehouse for a business owner Navarro rented to during the time, and was later utilized as an inn, restaurant, bar, and grocery store by the residents of Laredito. Access to the second floor of the building was through a stairway located on the eastern exterior wall.

The eldest of the site buildings is a small adobe structure built in the 1830s and later expanded to the north and south in the 1850s. This building was likely used as a kitchen and housing for servants during Navarro’s time. The floor of the building was compacted dirt, unlike Navarro’s home and mercantile building, which had wood flooring.

Although not much is known about the contents and furnishings of Navarro’s home in Béxar, it is likely that the homes were modestly decorated like those of many other Tejanos. Rudimentary cabinetry provided space for clothes, cookware, and household items, while furniture was likely simple in appearance and functionality. Tejanos valued homes not necessarily by their contents, but rather as spaces where traditions, culture, and folkways could be passed on between generations. Navarro, the aging Tejano statesman, was surely delighted by the many guests and family members that visited him regularly until his death at the home in 1871.