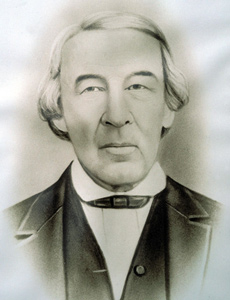 As the president of Texas, Mirabeau Lamar had a grand vision for expanding the Republic into New Mexico. He would send an expedition to Santa Fe in order to convince the people of New Mexico to join Texas.

Lamar selected José Antonio Navarro as a commissioner for the quest. He knew that Navarro was a respected statesman, but beyond that he was also a prominent businessman and an expert on Mexican law. Navarro also spoke Spanish and could help negotiate with the New Mexicans.

Navarro had every reason to reject Lamar’s overture. The 46-year-old father of seven had several growing business interests. He was also an important civic leader in San Antonio. His health was uncertain, and a childhood leg injury promised to make the long journey very difficult for him.

Yet Navarro knew that he must accept. He had seen the promise of the Texas Revolution turn sour for many Tejanos. They had joined the fight for independence but now were increasingly targeted as enemies by vengeful Anglos. Navarro’s service would prove Tejano loyalty to the Republic. He said, “My participation would serve…to avoid a crisis among my fellow citizens.”

The ill-fated Texan-Santa Fe Expedition left Austin in the summer of 1841. Navarro traveled with 320 soldiers and 21 ox-drawn wagons. The wagons were piled high with $200,000 in trade goods—the equivalent of $5.5 million today.

The expedition was a disaster from the beginning. Water was scarce, and the group got lost on the high plains. Several men deserted and some died on the way. Finally, after a punishing three-month journey, the bedraggled group arrived in New Mexico. They were met by an overwhelming force of 1,500 Mexican soldiers. The Texans had no choice. They surrendered without firing a shot.

The prisoners were marched 1,500 miles to Mexico City. Waiting for them was Santa Anna, anxious to exact revenge for his defeat at San Jacinto. Santa Anna was especially eager to punish Navarro, who he considered a traitor. After vigorous diplomatic efforts by the United States, Mexico finally agreed to release the Texans and send them home. Yet, Santa Anna refused to free Navarro. He was convicted of treason and sentenced to death.

But Santa Anna offered Navarro a deal: if he renounced Texas, he would be forgiven and allowed to take a prominent government position in Mexico. Navarro refused. He remained in prison for more than three years, never knowing what day he might be taken out and shot. Finally, with the help of sympathetic Mexicans, he escaped and returned to Texas.

Navarro arrived home in mid-winter, 1845. He was just days from turning 50. He was considerably grayer and in failing health. Texans welcomed him as a great hero. He had proved his valor and courage as a prisoner of Santa Anna. Even under the threat of death, he remained a true Texas patriot, stating, “I have sworn to be a free Texan, and I shall never forswear.”