Attracting Visitors from Across the World 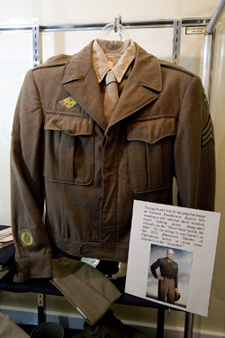 Eisenhower Birthplace captures a special place in the hearts of many people around the globe who hold connections to World War II. Scores of tourists from England, France, Germany and other countries visit yearly to see the home where former President and Gen. Dwight D. Eisenhower was born. This site has become a shrine of sorts and a memorial museum about the man who played an enormous role in ending the war in Europe.

Embodying a commonly held sentiment, one German visitor left the following brief but moving words in the guest register: “Dear Mr. President and General for the Forces in Europe in 1944; Thank you for saving our country from anarchy and devastation.” The writer — a woman who had been a young child around the time of the war — became quite emotional at seeing the place where the war hero was born. With her eyes raised to meet those of Ike’s in a huge framed photograph of him hanging in the visitors center, she spoke aloud her appreciation for what the General had planned and everything that thousands of “his boys, all the GI’s” had done on D-Day.

Others who have made their way to Denison from across the Atlantic are now elderly veterans of World War II who served with the American or British armies, many of whom have wonderful personal recollections to share. An even larger group of visitors are the children of those who saw combat in the European Theater, who come with the tales their fathers told them of the war.

Membership in what is called the “greatest generation” is declining all too quickly. Eisenhower Birthplace provides a place for the remaining men, women and children who endured the hardships of that war — on the battlefields or at the homefront — to ponder the simple origins of a Texas-born soldier who changed the history of Europe and much of the world.

No charge to walk the grounds (pick up walking tour at entrance).