The Eisenhower Birthplace is among the few 1870s homes remaining in Denison. Denison was not established until 1872, when the Missouri, Kansas and Texas (Katy) Railway was built. A good-sized town site was developed with expensive lots along Main Street for businesses, and hundreds of less-costly plots were laid out for new residents' homes.

Among the earliest developments was the Dumas Addition, which had blocks of 16 house lots each, to the southeast of Main Street. On September 20, 1876, Mrs. Dumas sold "Lots Number Nine and Ten in Block Number 7" of the Dumas Addition to W.H.H. Shuck. Together, the two lots formed a square plot at the corner of Day Street and Lamar Avenue. The lots cost $40 each.

Just one year later, the taxes levied on lots nine and ten increased in value to $450, indicating that a house—the future Eisenhower Birthplace—was built in 1877. In October 1877, the Shucks also decided to purchase two adjoining lots to the east along Day Street, creating a large backyard behind the one-and-a-half story carpenter gothic home. 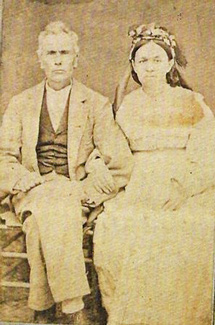 We do not think that the Shucks ever lived in the house. In the 1880 federal census of Denison, Mr. Shuck was in his early 30s, married, had two little boys, and worked as a machinery engineer at a flour and grain mill. He was paid well enough to hire two servants, but they all lived several blocks away on Crawford Street, so the Birthplace house was a rental property. In December 1880, the Shucks sold the house and back lots to Mrs. Evaline Welker for $650.

The Welkers only kept the property until January 1883, when it was sold to Mrs. Frances Lindsay, a widow. Our research indicates that Lindsay rented the house before deciding to buy it. The Birthplace staff had heard the Lindsay family built the house, but deeds prove they only owned the home longer than the builder, the mysterious Mr. Shuck.

Unlike the Shucks, we do know a great deal about the Lindsays. They had one son, several married daughters, and many grandchildren (one was even born in the Birthplace) living in Denison from the end of the 1870s into the 20th century. Quite a few are buried in Denison's original Oakwood Cemetery, including Frances and Noah C. Lindsay.

No charge to walk the grounds (pick up walking tour at entrance).