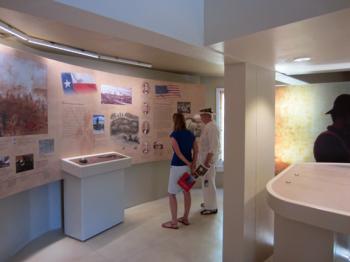 After word spread that the Alamo had fallen on March 6, Texas Commander in Chief Sam Houston ordered Col. James W. Fannin to destroy Presidio La Bahia—which he and a large force of Texian volunteers had been fortifying from possible Mexican attack—and retreat to Victoria.

On March 19, Fannin and about 300 men began the retreat to Victoria with Mexican Gen. Jose Urrea’s forces only two hours behind. Fannin’s lead quickly evaporated due to disturbances along the way, and soon they were caught in the middle of an open prairie near Coleto Creek, outnumbered by Mexican soldados.

For the rest of the day, the Texians successfully fought off repeated attacks by the Mexican soldiers, but by nightfall the Texians were completely surrounded. With seven Texians dead and 28 wounded, Fannin’s command faced the prospect of trying to fight their way through Urrea’s lines or remaining on the field. Realizing that they would have to leave their wounded, which included Fannin, the Texians reworked their defenses, dug trenches and waited for sunrise. Dr. Joseph H. Barnard described the situation that night: “We were without water, and many, especially the wounded, were suffering from thirst… from some unaccountable oversight, we had left our provision behind.”

The next morning, after receiving reinforcements and artillery, the Mexican troops resumed fire. Realizing that it was virtually impossible to continue fighting, Fannin and his officers surrendered. It is believed they drafted terms, which consisted of a guarantee that they would be treated as prisoners of war, their wounded given medical attention and all prisoners would eventually gain freedom by release to the United States. Urrea made it clear to Fannin that he could not ratify those terms, but would use his influence with Santa Anna on the Texian’s behalf. The signed document states the surrender was “subject to the disposition of the supreme government.”

Fannin and his command were marched to nearby Goliad where they were held as prisoners. On March 22, William Ward and 80 men from the Georgia Battalion surrendered to Gen. Urrea at Dimmit’s Landing and they were also held as prisoners at Goliad. Despite Urrea’s own beliefs that the prisoners would be treated well, Santa Anna ordered the execution of the prisoners on March 27, 1836. The Mexicans spared 20 physicians, orderlies and interpreters, and another 28 prisoners were able to escape. Deemed a massacre, the execution of Fannin’s command served to inflame the Texas cause, and when Texian forces attacked Santa Anna’s command on April 21, 1836 at San Jacinto, the battle cry rang out “Remember the Alamo! Remember Goliad!”