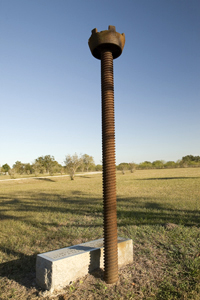 Fannin Battleground State Historic Site commemorates the site of the Battle of Coleto Creek, which occurred on March 19 and 20, 1836. As Col. James W. Fannin and a force of Texian volunteers retreated from Presidio La Bahía, renamed "Fort Defiance” by Fannin, they were attacked and overrun by Mexican forces led by General José Urrea. After surrendering, the Texians were taken back to the Presidio, held briefly and then executed on Palm Sunday.

A survivor of the battle who escaped the subsequent execution, William L. Hunter, marked the site of the battle with a pile of rocks. It is unclear whether this commemorates the location of the Texian entrenchment or that of Fannin’s surrender. In 1894, Solomon Parks, Sr., a Goliad resident, replaced the rocks with a massive iron screw from a cotton gin. The screw was originally used to compress cotton into bales. Two yokes of oxen and a crew of men needed to transport and erect the new marker. The precise extent of Fannin's defenses and the battleground has yet to be determined. The State of Texas accepted the donation of 13 acres around the marker in 1913 and erected a 28-foot granite monument in honor of Fannin and his men in 1916.

Visitors to Fannin Battleground can still see the massive iron screw standing at the site.