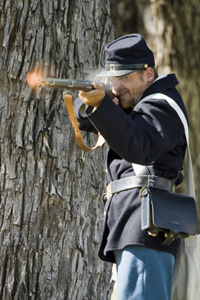 On July 31, 1867, Lt. Col. Samuel D. Sturgis and four companies of the 6th Cavalry established a new post high on a plateau, overlooking a bend of the Clear Fork of the Brazos River to the northeast. First designated as Camp Wilson, the name of the post was changed to Fort Griffin in honor of Gen. Charles Griffin, the commander of the Department of Texas who died of yellow fever the previous September in an epidemic sweeping Galveston.

Although the original intention was for all buildings on the grounds to be permanent stone structures, they retained a temporary appearance throughout their existence. In the beginning, log houses called “picket” huts (built with vertical logs), tents and rough frame buildings with earth and canvas roofs were erected as provisional shelter. The scarcity of materials, shortage of funds and daily demands of military duty allowed for only six of the more than 90 structures of the garrison to be built wholly of stone. Although Fort Griffin was known on the frontier to be a very tidy, disciplined place, it was an especially active fort and the troops were kept busy with protection and settlement of the frontier with little time for building construction or maintenance.

The town of Fort Griffin, also known as The Flat or Hide Town, was considered one of the West’s five wildest towns with streets thronging with soldiers, buffalo hunters, drovers, gamblers, saloon girls, surveyors, outlaws, clerks, merchants and ranchers. As early as 1868, The Flat’s gaming tables, restaurants, livery stables and bordellos provided general amusement for the soldiers at nearby Fort Griffin. Besides spending most of their wages there, soldiers from the fort were often called upon to police the town.

Fort Griffin became a major support post during the Red River War of 1874, with Col. Ranald S. Mackenzie utilizing the fort as a base of operations for several years. Troops from Fort Griffin, including units of the Buffalo Soldiers and Tonkawa scouts, participated in all the decisive campaigns that ended Kiowa and Comanche domination of northern Texas.

In May 1881, the U.S. Army determined that Fort Griffin was no longer necessary for defense and the post was abandoned. With the soldiers and buffalo gone and the cattle trails replaced by railroads, the roaring town of Fort Griffin slowly dissolved.