Horses and Mules at Fort Griffin 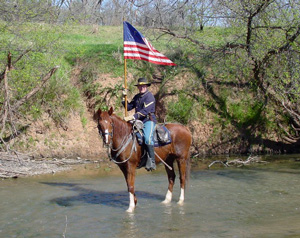 Horses and mules were critical to the daily operations of a military post like Fort Griffin. Each cavalry soldier had a horse, military wagons had mules, and hospital wagons were pulled by more horses. At its peak occupation in 1874, Fort Griffin had about 400 horses and mules.

In the early 1850s, many of these horses and mules were purchased in the Mississippi Valley and shipped to Texas via steamers, driven overland to San Antonio, and from there taken to their assigned forts. It is little wonder inspectors at the forts often complained that the animals from out-of-state were in poor condition by the time they reached Texas. Inspectors also reported that “at least 50 percent of the horses shipped here from the North are not fit for the service for a year afterwards and fully 20 percent have to be condemned from the effects of acclimating fever.”

Another issue with horses and mules from other states was that they could not survive on a diet of prairie grass—they had to have high nutrient-rich food supplements such as corn or oats. On campaign, this was an issue because each horse or mule had to have a supply of grain, just as each soldier had to carry his rations. In comparison, the Native American ponies could survive on prairie grass, allowing them to be mobile as long as there was grass. When the army ran out of corn or oats, their animals quickly broke down and became useless. Many of the army’s missions were delayed or prematurely ended until they could resupply with feed for their horses and mules.

Eventually, the army realized Texas-bred horses and mules were better suited for the job. They could survive on prairie grass longer than Northern horses and were more acclimated to the region. From 1849–1900, the army spent $1,243,900 on Texas-raised horses and mules. Many army inspectors commented that it was “the general opinion of the officers in Texas that the horses of the country are better adapted to the mounted service than those purchased out-of-state,” but even the Texas animals still needed some extra forage such as corn, oats, and hay.

At Fort Griffin, this was primarily corn and hay. Just as each soldier had a fixed ration of food, so did each animal. The maximum fixed ration for a horse or mule, as set by a military board in 1850, was 14 pounds of hay and 12 pounds of corn or oats per day. These amounts were maximums, and at most posts the animals never received this amount of feed.

In March 1873, Lt. Col. Jonathan P. Hatch conducted an inspection of Fort Griffin’s forage, and he reported that 140 pounds of corn, 4 ½ pounds of oats, and 145 pounds of hay were in the store house. During that same time, there were 281 men of the 10th Cavalry and 11th Infantry, plus 20 Tonkawa scouts assigned to the post. If there were 140 horses and mules on post then there was a very limited supply of animal feed available. This was typical in Texas, especially in early spring when hay was readily available but corn and oats were usually in short supply. Most army animals only received half of the corn rations due to limited availability. During Lt. Col. Hatch’s inspection, he also stated:

Present contract prices for corn is $2.63 per bushel, of oats $1.92, of hay per 2,000 lbs, $23.73. The corn is mostly raised within one hundred miles of the post. Should the present season prove favorable to the crop, the corn required for the next fiscal year would be purchased in the immediate vicinity of the post; nearly or quite one thousand acres of ground in the Clear Fork bottom have been planted with corn this spring. 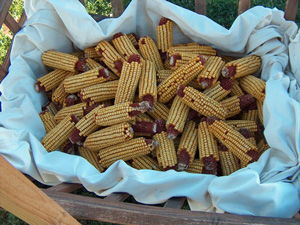 Growing corn was risky business. Insects, Native Americans, and lack of rain were all dangers a farmer might face before he could harvest. As William Curry Holden wrote, “Figuratively speaking, the settler had to hold his rifle in one hand and his plow in the other; his eye shifted nervously from the furrow of the tree, bluffs, or ravines surrounding the field. He was in constant danger of his work-stock driven away, his cattle and hogs butchered, his house burnt, and his family scalped!”

While growing corn in the Clear Fork Country, Sophie Poe commented about her husband’s experience with insects, saying, “They stood staring at that haze which swiftly moved across the sky. Quickly an enormous green cloud was over them, and from the cloud came a metallic buzzing that seemed to fill all the air about them. GRASSHOPPERS! There goes our corn!” By 4 p.m. that afternoon, not a blade of grass was on the ground, not a leaf on a tree, not a stock of corn was left in the field. Most likely the grasshoppers were Rocky Mountain locusts and part of the great 1874 Grasshopper Plague that destroyed thousands of acres of crop land in Texas and the Midwest.

Another danger was cattlemen and their longhorns. Most cattlemen objected to the plowing and planting of hundreds of acres of corn on range they wanted kept free for their stock to graze. Many graingers—or nesters, as the cattlemen called these farmers—had their crops destroyed when cowboys drove their cattle through the fields. If that didn’t work, midnight riders often gunned down their milk cows, killed their work mules, and shot up their houses. One account states that “about 16 men …slashed across the countryside, discharging their firearms into houses, galloping into the very houses of the farmers at midnight and shooting through the flimsy walls. Cattle were shot dead on the prairie and run over cliffs.” Many nesters gave up in fear, but just as many stayed. Where there was government money to be had, there was always someone willing to work for it, and corn brought in big money in Texas. Between 1849 and 1900, the army spent $9,052,000 on corn, oats, and hay grown in Texas.

Native American raids made the transportation of corn and other commodities very dangerous and expensive. For example, on May 18, 1871, Capt. Henry Warren’s wagon train was attacked by some 100 Kiowa, Comanche, Arapahoe, and Southern Cheyenne Indians from the Fort Sill Reservation. Under contract to Fort Griffin, Capt. Warren had 10 wagons loaded with sacks of corn that had been picked up at the railhead at Weatherford, about 80 miles east of Fort Griffin. While traveling between Fort Richardson and old Fort Belknap, the wagon train crossed the Salt Creek Prairie where the Indians attacked the 11 teamsters, killing seven. Capt. Robert G. Carter, while investigating the attack, described the aftermath as follows:

There could be nothing more appalling, heart rending or sickening to the human senses than the spectacle which was witnessed when our command reached the scene of the Salt Creek Prairie massacre. The poor victims were stripped, scalped and horribly mutilated... One wretched man, Samuel Elliot, who, fighting hard to the last, had evidently been wounded, was founded chained between two wagon wheels and a fire having been made from the wagon pole, he had been slowly roasted to death…

Earlier that same year, on January 24, 1871, another freighter, Britt Johnson, and his two teamsters were attacked by 25 Kiowa and killed just 4 miles east of the Salt Creek Prairie. They were also engaged in the business of freighting corn and other supplies from Weatherford to Fort Griffin. Many other freighters came under attack, although none of the assaults were as atrocious as the Warren Wagon Train Raid.

Each raid drove up the cost of moving supplies across the frontier. For example, in 1871, Adams & Wicks contracted to pick up freight at Redmond and deliver to Fort Griffin at $2.83 per 100 pounds for every 100 miles traveled, while W.C. Graham’s freight costs were $4.70 per 100 pounds for every 100 miles traveled from St. Louis, Missouri to Fort Griffin.

Corn also made it to the civilian population at Fort Griffin. The local sutler, Conrad and Rath, sold many products including fresh corn at 5 cents an ear, canned corn for 35 cents, and corn meal at 15 cents a pound to the soldiers, civilian contractors, and local residents.

After the Warren Wagon Train Raid, the military launched a decisive campaign against the Plains Indians culminating in the Red River War of 1874–75, which for the most part ended large-scale Indian raids on the Clear Fork Country. By 1881, the Texas and Pacific Railroad was extended to Abilene, and the Texas Central Railroad had reached Albany. The frontier was settled and farming, cotton, and barbed wire soon became the norm. The army now had no need for many of the forts that remained far behind the settlement lines, one of which was Fort Griffin. On May 31, 1881, the flag was lowered for the last time at the post, and the remaining 50 or so soldiers of the 22nd Infantry, led by Capt. J.B. Irvine, marched to Fort Clark, ending Fort Griffin’s 14 years of protecting the frontier.

A Texas Frontier: The Clear Fork Country and Fort Griffin, 1849–1887 by Ty Cashion

Buckboard Days by Sophie A. Poe

On the Border with Mackenzie by Robert G. Carter