1857 Ruse Against the Apache

In the days of westward expansion during the early and mid-1800s, there were several main routes crossing the American West. To the north, the Oregon Trail led to the settlement of the Pacific Northwest. Towards the center of the continent ran the Santa Fe Trail. To the far south, the San Antonio–El Paso Road served as the main overland route to California.

With the end of the Mexican-American War in 1848 and the discovery of gold in California, numerous people were drawn out west. Traveling along the lower San Antonio–El Paso Road through what would become Crockett County, these travelers included California-bound gold seekers (the 49ers), western settlers, the U.S. mail line, and the stagecoach service. To protect the road and travelers from the American Indians still living throughout West Texas during the 1850s–1870s, Fort Lancaster was established in 1855.

Typically, the Apache gave the soldiers of Fort Lancaster the most trouble. They usually avoided direct confrontations with U.S. soldiers or their forts, and instead sometime carried out swift and mobile raiding parties on small wagon trains along the isolated sections of the road. The American Indians viewed settlers as encroaching into their territory and tried to do whatever they could to defend their homeland. When a raid was reported, soldiers were often dispatched to the area. Often the raid had long passed, leaving the soldiers to salvage any supplies, wagons, or survivors. 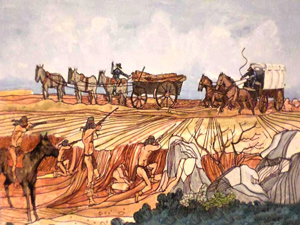 During the 1850s, Fort Lancaster housed infantry soldiers (not cavalry) and could not effectively pursue threats without horses. For the soldiers of Fort Lancaster, creative tactics and critical thinking was essential given their situation. Nevertheless, skirmishes between the soldiers and the Apache did occur from time to time. For the most part, only a few shots were fired and usually no more than 30 or so people were involved on either side. However, situations were not always as they appeared on the frontier.

On July 24, 1857, it seemed a typical day for a small wagon party headed west from Fort Lancaster. The party consisted of 14 soldiers and several wagons transporting the U.S. mail and a wood supply detail. The soldiers, from Forts Davis and Fort Lancaster, were escorting the wagon train along the route. Roughly 25 miles northwest of Fort Lancaster (near the present-day town of Iraan), the party was approached by more than 40 Mescalero Apaches under a white flag. Despite the apparent peaceful intent, another group of Apaches remained hidden below in a nearby ravine. Upon being confronted by the soldiers, the Apaches opened fire upon the wagon party, killing one soldier. The Apache had chosen their ground wisely, firing from the protection of the ravine.

Outnumbered four to one, the soldiers unhitched the teams and used the wagons for cover. Eventually, the soldiers retreated and abandoned the wagons to the Apaches. Traveling on foot throughout the night, the surviving members of the wagon party made their way back to the protection of Fort Lancaster.

The following day, Fort Lancaster commanders devised a special plan to track down the Apache warriors who had attacked the soldiers. Several covered wagons were loaded with a force of around 80 soldiers, and disguised as an unarmed supply train. Heading towards Fort Davis (Fort Stockton was not established until 1859), the train set out covering the same stretch of road that had been raided the previous day. The officers hoped Apache raiders would spot the wagon train and be lured into an attack.

As expected, the wagon train attracted the Apaches’ attention. After traveling for some time, the soldiers spotted a large group of Apache warriors on the horizon. The commanding officer of the force Lt. Edward Hartz wrote, “A considerable body of Indians numbering from thirty to forty, well mounted and provided with fire arms charged suddenly upon the train.” 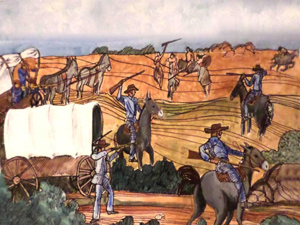 The soldiers poured out from the wagons and deployed as skirmishers firing upon the Apache advanced. Surprised by the soldiers and now outnumbered, the Apaches halted their advance, but persisted in an exchange of fire for several minutes before withdrawing out of the range from the soldier’s rifles. Lt. Hartz wrote, “They [the Apache warriors] then set fire to the prairie with the evident intention of burning our train and approaching under cover of the smoke.”

But quick thinking by the soldiers averted disaster. The wagons were quickly driven several hundred yards away to a clearing free of grass and brush. After waiting out the fire, the soldiers emerged and continued to press the attack. The Apaches fell back beyond the range of the soldier’s rifles and waited for any possibility of capturing the wagons. With no chance of defeating the soldiers, the Apaches withdrew. On the retreating horses, the soldiers could see the bodies of two or three Apaches—either wounded or killed—being carried off the battlefield. Lt. Hartz wrote, “The Ruse was successful… None of my command were injured.”

This skirmish was a major achievement for the soldiers of Fort Lancaster. They had successfully pursued a threat of Apache raiders, and continued to secure safe passage along the lower San Antonio–El Paso Road.

Travelers through this area would have known the potential risk of traveling west. Weather, illnesses, and American Indians were all factors that pioneers, travelers, and soldiers had to cope with. Fort Lancaster stood as a place of safety and refuge in the American West, and served as an important post for these west-bound travelers.