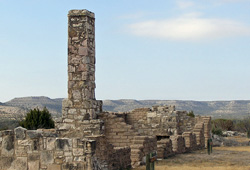 There are many U.S. Army forts in Texas. Some are active, like Forts Hood and Bliss. Some are now historic sites, like Forts Lancaster, McKavett and Griffin. How did they get their names?

Typically, forts were named after Army officers. After the Mexican–American War (1846–48), the Army named several forts for officers killed in the war, including McKavett, Martin Scott, and Clark. They also named forts for officers who survived the war, such as Davis, Duncan, and Worth.

Fort Lancaster is unique because it was named after an officer who died in Florida during the Second Seminole War. How did this happen?

On July 20, 1855, the soldiers stationed at Fort Duncan were ordered to establish a new post near the Pecos River crossing. Capt. Stephen Carpenter, in command of Company H, suggested the name Lancaster for the post.

Capt. Carpenter graduated from West Point in 1840. In a class that included four future generals, his best friend was Job Roberts Hamilton Lancaster from Ohio. Upon graduation, Lieutenants Carpenter and Lancaster reported for duty with the 1st U.S. Infantry Regiment stationed in Florida.

On July 5, 1841, 2nd Lt. Lancaster was returning from a scouting mission with his soldiers along the Crystal River when the unthinkable happened.

Lt. Lancaster’s sudden death was recorded by Brevet Capt. John T. Sprague :  “The sudden death of Second – Lieutenant J.R.H. Lancaster, on the 5th of July, 1841, was felt by his entire regiment. When standing in the stern-sheets of his boat, descending Crystal river, leaning upon his musket, in command of a detachment of men just from a successful scout …he was struck dead by lightning.

…he combined intelligence and love of his profession; thus securing the confidence of his commanders and affection of his comrades.”

One of Lt. Lancaster’s soldiers also died from lightning.

Capt. Carpenter’s suggestion of naming the new post after his friend and colleague Lt. Lancaster was accepted by the Department of Texas Commander, Brevet Maj. Gen. Persifor Smith. On August 20, 1855, the soldiers arrived from Fort Duncan and established Camp Lancaster. The camp was upgraded to fort on August 21, 1856.