The Skirmish on Live Oak Creek

Two months after the establishment of Camp Lancaster in August of 1855, the soldiers of Companies H and K, First U.S. Infantry Regiment, were still adapting to their new home. Not long after their arrival they fought their first skirmish with the Apache. It was a fierce encounter and a wakeup call for the soldiers stationed on the Texas frontier.

Camp Lancaster consisted of tents and portable structures near Live Oak Creek. It was the soldier’s task to construct the permanent buildings, protect travelers along the San Antonio to El Paso Road, and scout the area. Within a year the camp was upgraded to Fort Lancaster. 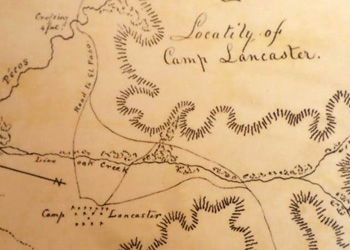 The group traveled upstream observing the lush vegetation, wild grape vines and live oaks. After traveling for some time, they came upon a grove of hackberry and gum-trees. The trees had straight trunks, ideal for a flag pole. The teamster and several members remained there to cut trees to be taken back to camp. Captain Carpenter, Dr. Stillman and the dogs continued upstream. 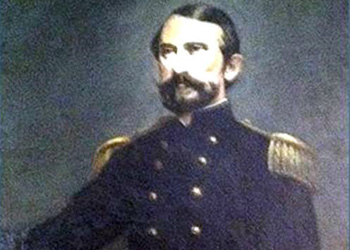 Wild turkeys were plentiful in the area and Captain Carpenter could not pass up the opportunity of an easy hunt. After crossing paths with a turkey, he fired his gun, wounding the bird. Captain Carpenter and his dogs followed after the turkey making their way over a nearby ridge. Expecting to find an injured bird, instead he stumbled upon a group of Apache mounted with bows, arrows, lances and a few guns. He estimated nineteen warriors and they appeared to be ready for battle.

Had he been seen? The Captain, after making a quick observation made his way back down the ridge. Perhaps he had not been spotted as all was still calm. Captain Carpenter, Dr. Stillman and the dogs quickly returned to the thicket where the rest of the party was working. After informing everyone about the situation, all haste was made to load the wagon so the party could return together.

Several of the soldiers, including Captain Carpenter, proceeded to mount a defense in front of the wagon team and keep watch on the trail. It was not long before the Apache were spotted. Gunfire erupted as the Apache opened fire, and they soon dismounted so they could encircle the soldiers. 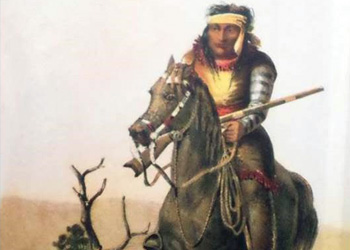 Dr. Stillman recorded the occasion: “The Indians approached under cover of the brushes, rising to let fly an arrow, and immediately hiding again, before a sight could be drawn upon them…”

Shots were fired from both sides as the skirmish escalated. Suddenly, two of the Apache emerged from the brush and charged towards the civilian teamster, overtaking him near the creek. It was a fierce situation with close combat. The soldiers fired back, shooting several of the warriors. Many of the attackers remained hidden, shooting from behind the brush while one Apache attempted to steal the wagon and mule team.

Pvt. McCulloch was shot in the foot with an arrow and Captain Carpenter nearly faced death himself. Dr. Stillman recorded the captain’s encounter: “One arrow had struck his horse, which was rearing and plunging, one severed the strap at his shoulder, which held his shot belt, another transfixed his boot from behind, passing between the sock and his leg…a forth [sic] pierced his heavily-quilted hunting coat, and passed through, and a fifth struck his hand in which he held his gun...”

Outnumbered, nearly three to one, it seemed the soldiers might be surrounded and killed. Just as quick as the fighting had started, the Apache withdrew into the brush along the creek and carried their dead and wounded, according to their custom. Captain Carpenter, the other soldiers and the captain’s dogs made their way back to Camp Lancaster.

During the chaos of battle, Dr. Stillman was separated from the rest of the party and forced to retreat back to Camp Lancaster. After reporting the situation, a rescue party was formed, which quickly proceeded up Live Oak Creek to find the other soldiers.

Dr. Stillman wrote: “I reported the whole party killed, as I had no doubt they were… The probable death of Captain Carpenter, who was so much beloved by the whole command, created a most painful sensation. There was a hurrying of men to arms, and a party started off on foot at quick time.”

Near dusk, Captain Carpenter and the remaining party returned, grateful they had survived. A search party continued towards the location of the skirmish and recovered the wagon along with one of the mules. The soldiers found a harness, a bear skin, Apache apparel, and arrows scattered over the area. 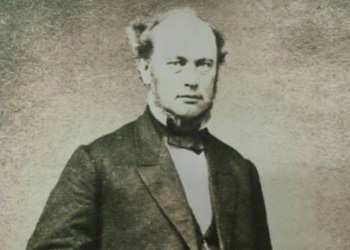 After surveying the area, Dr. Stillman observed the following: “[The Apache] knew that I had escaped to camp, and that reinforcements would soon be at hand, and they lost no time in getting away… These Indians were a band of Apaches, and as we learned by following their trail afterward, they had observed us in the morning as we passed up the creek… Their dispositions were well made, and the whole plan of attack showed great sagacity, and would have been successful in cutting off every man in the party, were it not that they wanted victory too cheap.”

Several of the Apache and the civilian teamster lost their lives in the skirmish. The skirmish on Live Oak Creek served as a reminder of the danger soldiers faced on the frontier. It was a day they never forgot.

In the years following, the soldiers of Fort Lancaster would fight in other skirmishes with Native Americans. Despite the isolation and dangers of West Texas, the soldiers continued their duty to establish the fort and guard the road. They undoubtedly played a role in shaping the American West.