Where the West Began 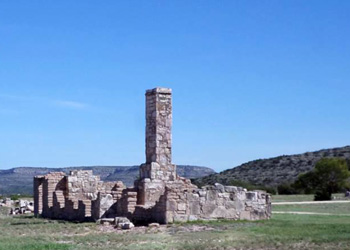 There is a rich history in West Texas of Native Americans, westward wagon trains, the U.S. Army, and early American settlers. In traveling through Crockett County, one will see the ruins of an old fort known as Fort Lancaster.

Today Fort Lancaster sits isolated, home to no major city, and weathered by time. Despite its isolation and abandonment, Fort Lancaster did see a fair share of action and contributed to the safety of early American settlers. Fort Lancaster’s story in shaping the American West is worth remembering.

The end of the Mexican-American War in 1848, along with the discovery of gold in California, drew Americans west. Many wagon trains traveling west through Texas traveled along a route known as the Lower Government Road (or San Antonio-El Paso Road). Native Americans such as the Apache lived throughout West Texas during this time. To ensure the safety of westward travelers, the U.S. Army established forts along the road such as Forts Davis, Lancaster, and Stockton.

In August 1855, companies H & K of the First Infantry Regiment established Fort Lancaster near the junction of Live Oak Creek and the Pecos River. The soldiers used stone, adobe bricks, wood, and grass to construct the buildings. Fort Lancaster included barracks, a blacksmith, commissary, corral, and a hospital. The soldiers patrolled the road and provided escorts for travelers. Fort Lancaster was an important post. In 1856, Inspector General Col. Joseph K.F. Mansfield wrote that the fort was a place “travelers can rest and recruit their animals and repair their wagons with safety. It undoubtedly has and will save many valuable lives.”

In 1855, at the recommendation of Secretary of War Jefferson Davis, a skeptical Congress appropriated funds to experiment with camels to be used for military purposes. It was believed the desert conditions across the American West were ideal for camels as means of transporting supplies or personnel. The U.S. Camel Corps was established with Camp Verde, Texas serving as its home.

In July 1857 the Camel Corps arrived at Fort Lancaster en route to California. Around 25 camels along with other military wagons and escorts entered the fort grounds. It was quite a sight for the soldiers stationed at Fort Lancaster. May Stacey, a member of the Camel Corps wrote, “Our camels attracted much attention, the whole garrison turning out to see them.” The camel expedition traveled to California, with the camels subsisting on little water and the desert vegetation. Despite its success, the Camel Corps was abandoned as the nation faced more pressing issues with the beginning of the American Civil War.

There were vast distances between the forts. The Army decided to expand the fort system, and in 1859 Company H departed Fort Lancaster to help establish Fort Stockton on Comanche Springs. Fort Stockton, built between Forts Davis and Lancaster, ensured better escort and safety for travelers.

In the anxious days preceding the Civil War and the outbreak of hostilities, all federal troops in Texas, including Fort Lancaster, were evacuated, leaving the frontier and the Lower Government Road open to Native American raids. Texas responded quickly, and by November 1861, Company F of the 2nd Regiment, the Texas Mounted Rifles, took over Fort Lancaster. The Texas Confederates, despite the isolation, made the most of their experience and some even found the site beautiful. Confederate soldier W.W. Heartsill stationed at Fort Lancaster in 1861 wrote, “We arrive at Fort Lancaster and find a beautiful place, it is situated on Live Oak Creek, half mile above its junction with the Pecos River.”

In late 1861, Confederate General Sibley and his troops passed through Fort Lancaster. His expedition included a brigade of mounted soldiers and several small cannons. His mission was to invade and hold parts of the New Mexico territory for the Confederacy. His visit was said to have brought a “morale boost” to the soldiers at the fort. However, a revised defense plan recalled the Texas Mounted Rifles in 1862, leaving Fort Lancaster abandoned for the remainder of the war.

With the end of the Civil War, the Buffalo Soldiers (African American soldiers) of the 9th U.S. Cavalry Regiment were stationed at Fort Lancaster. During their stay they encountered the same situations of isolation and guard duty as soldiers before them, except in one instance.

It was the day after Christmas 1867, when a large band of Native Americans believed to be the Kickapoo and their allies approached the fort. An attack ensued with the Kickapoo quickly trying to seize the fort’s horses and mules that had been driven to water along the creek. The battle quickly spread to include a direct attack on the fort. The soldiers formed a skirmish line, firing their rifles, volley after volley. Among the gunshots and confusion, the soldier’s horses stampeded into the Kickapoo’s ranks. The Kickapoo, having captured the horses, halted their advance and the soldiers were able to repel the attack. The commander of the fort, Capt. William Frohock, wrote the regimental headquarters at Fort Stockton exclaiming, “Had this stampede not occurred, it is doubtful if the defenses against such overwhelming odds could have been successful.”

Fort Lancaster was never fully reoccupied after the Civil War but was used as a sub-post.  The attack by the Kickapoo was motivated by low garrison numbers, along with the soldier’s horses and mules seen as easy taking by the Kickapoo. Fort Lancaster continued serving the area for the next couple of years. However, as the Native American threat diminished, so did the fort’s need. Eventually in the late 1870s Fort Lancaster was abandoned, leaving it weathered by time as today, only ruins remain.

Today the site is preserved by the Texas Historical Commission and is open to the public for daily visitation. The site recently completed a two-year renovation that includes a new visitors center built from the original building.  Visitors can tour the ruins of Fort Lancaster and see “Where the West Began.”