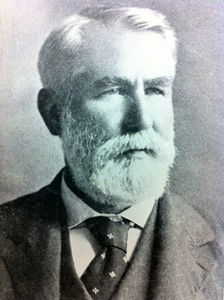 Born in New Orleans in 1843 to Scots-English immigrant parents, William L. Black left formal education early in life to work for his father as a cotton broker. When the Civil War broke out, Black enlisted in the Crescent Regiment of Louisiana Volunteers, and in April 1862 he was sent to the battlefield in Shiloh, Tennessee. During the battle, he and one of his brothers were wounded and furloughed to New Orleans to recuperate. During his recuperation, Black’s enlistment expired. Instead of re-enlisting, he joined his brother Alexander and together they slipped through the Union naval blockade by steamboat to transport cotton from Tampa, Florida to Great Britain. This venture was short lived when Black’s ship was intercepted and the goods on board were confiscated. Because Black’s parents were immigrants, his father petitioned to have him tried as a “British subject” and he was released.

Black traveled to Nassau, Bahamas where Alexander had relocated his blockade-running headquarters. It was there that Black was introduced to George Bogert and Thomas E. Hogg. Hogg had been commissioned by the Confederate Secretary of the Navy to organize an expedition to disrupt the United States’ Pacific commerce. Black was soon recruited to be part of this expedition and was commissioned as the acting assistant paymaster. Hogg and Black then departed to Havana where they completed the organization of the expedition.

During the fall of 1864, their plan was put into action. Hogg, Black, and five others set off for Panama where they were planning to board the Guatemala and San Salvador and commandeer the vessels. The U.S. Navy was alerted and their plan was thwarted by 100 armed U.S. marines. Hogg, Black, and the other members of their party were convicted as pirates and sent to California, where they were confined on Alcatraz Island. Black spent the next six months in San Quentin Penitentiary until his mother successfully petitioned President Andrew Johnson to dismiss the remainder of his 10-year prison sentence.

On June 10, 1869, Black married Camilla Bogert, the daughter of George Bogert whom he had become acquainted with in Nassau and had worked with in New York after being released from prison. After his marriage, Black operated a cotton brokerage firm in New York and began to build a small fortune. He continued his operations with the brokering of cotton and moved his operations from New York to St. Louis where he continued until 1880. His adventurous spirit once again took its toll, and he began looking to the frontiers of West Texas in the late 1870s for new opportunities to make money. He was gone for weeks at a time looking for business ventures, and his wife often feared the worst if communication was lacking during his travels. After weeks of silence, during one of his trips he telegraphed her, writing, “Inform my wife I am well. In Fort McKavett. It has been reported that I have been killed by Indians.”

In 1876, Black purchased 32,000 acres of land containing a 300-acre grove of pecan trees at the headwaters of the San Saba River along the western border of the Fort McKavett Reservation. Unwilling to bring his wife and family to the wild frontier of Texas, Black ran the ranch in absentia from St. Louis. One of his associates from New York handled the day-to-day operations at the ranch and tended to the grazing cattle and sheep on the property. The ranch manager of Black’s Fort McKavett ranch hired local Tejanos to tend to the herds of sheep, and wrote to Black that they preferred goat to mutton (sheep) meat. This led to Black’s foray into what he would become most famous for—Angora goats and the Range Canning Company.

In 1884, the Blacks moved from St. Louis to live on the ranch in Fort McKavett. While waiting for a house to be built for his family on the ranch, the Blacks stayed in the recently abandoned hospital building at Fort McKavett. William and Camilla’s children would entertain themselves during their stay at the abandoned fort by roller skating around the old recovery ward. Shortly after their move from the fort’s hospital building to the ranch, Black became interested in Angora goats and their value in both meat and wool production. 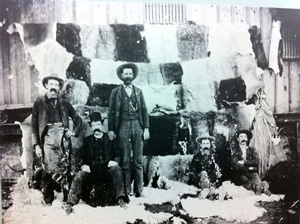 The first Angoras were brought to the U.S. from Turkey in 1849, and the popularity of the fine wool produced by the Angoras increased over the next two decades, only to be slowed by the American Civil War. In 1867, California led the nation in Angora production, though by the 1880s these herds were being driven to Texas to take advantage of the plentiful land and a climate that was conducive to livestock production. In 1884, due to increasing media attention and rising popularity in the Angora goat, Black purchased eight bucks and four does of a nationally renowned bloodline and began his most prosperous business venture. By 1892, Black’s Angora goat flock had risen to more than 8,000 animals. His interest in the goats was apparent through articles he wrote for agriculture periodicals, pamphlets, and a book praising the merits of the Angora goat. He was soon known as an expert on the subject.

Black needed a market for his Angoras other than just their wool production. In order to thin his herd, he contacted an acquaintance at Armour & Company, a meat packing company in Chicago about the possibility of purchasing 1,000 of his goats. Armour declined the offer, stating that their customers did not care for goat meat, but suggested that he should slaughter the goats himself and package them in two-pound hermetically-sealed tin cans. In 1893, Black followed this advice and created the Range Canning Company on his ranch near Fort McKavett. Partnering with W.G. Tobin, an experienced canner and hide tanner, they marketed their product under the name “W.G. Tobin’s Chile con Carne” and sold the product through a Chicago distributer. Earlier products such as the Range Canning Company’s “Boiled Mutton” and “Roast Mutton” did not have the appeal of the “authentic” Texas chile con carne. By January 1895, Black’s operations were slaughtering 125 goats daily and had shipped more than 20,000 pounds of tallow to Chicago. This venture, though profitable for Black, was short-lived and he ceased his canning and tanning operation in 1896.

All of Black’s experience with the Angora goat culminated in his extensive study on the animal, a 523-page book titled A New Industry, or Raising the Angora Goat, and Mohair, for Profit, which was published in 1900. This work contained 36 chapters on the Angora goat and included more than 50 sketches and photographs, as well as appendices, charts, and tables. This book served as the textbook for Angora ranching and mohair production over the next 40 years. 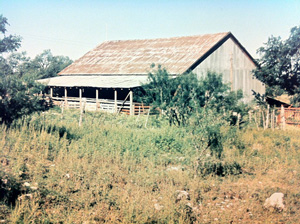 Black retired from ranching after his wife Camilla suffered a stroke at the Fort McKavett ranch in 1913, and they moved to Brownwood to be closer to medical services. He continued to write in support of the Angora industry, and worked on his inventions, including a nut sheller for pecans, a mechanized cotton picker, and a windmill sucker rod pipe guide—a variation of which is still in use today.

William L. Black’s life ended on May 11, 1931, four weeks after suffering a stroke that left him paralyzed and bedridden at his daughter’s ranch near Fort McKavett. His passing was noted, not only in the local newspapers, but also in the Philadelphia Public Ledger and Time magazine. One West Texas newspaper summed up his passing with a sentence that concisely described Black’s impact on Texas’ history: “West Texas misses today a presence which for more than sixty years had been of tempestuous importance in its development.”