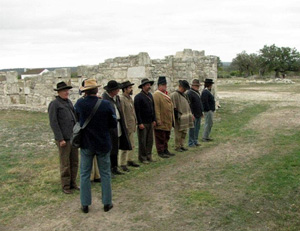 With the secession of Texas from the United States on February 1, 1861, Federal troops stationed in military outposts throughout the state were suddenly operating in enemy territory. It was not until February 18, 1861 that the U.S. posts were surrendered to the State of Texas by Gen. David E. Twiggs, commander of the Military Department of Texas, and the safety of Federal troops was seriously questioned.

Between February 18 and April, 17 military posts were abandoned or surrendered to Texas State Troops. The soldiers, following Special Orders No. 411, marched from their posts to Indianola, Texas, where ships were awaiting to transport them to Federal ports on the East Coast. However, not all the soldiers were able to make it to the assembly point near Indianola before the May deadline. 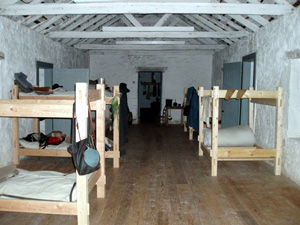 On May 9, 1861, 1,350 Texas State Troops2, under the command of Col. Earl Van Dorn and Col. Henry E. McCulloch, confronted a Federal force of 320 soldiers commanded by Brevet Col. I.V.D Reeve of the 8th Regiment of Infantry U.S., 15 miles north of San Antonio. The Federal force surrendered without firing a shot, once the strength of the Texas troops became apparent. The six companies (B, E, F, H, I, and K) of the U.S. 8th Regiment of Infantry were made prisoners and were first held at a temporary camp on Salado Creek, five miles west of San Antonio, along with soldiers who had previously been stationed at the headquarters of the Military Department of Texas in San Antonio. These prisoners were noted as being without “restrictions as to limits, except attendance on retreat roll-call; and could be permitted to go anywhere within the county upon a written pass signed by their own officers.”3 The prisoners of war were held at this camp, dubbed “Camp Van Dorn” by the Texans, until early September4 when they were moved to Camp Verde, 10 miles south of Kerrville, to be held in a valley near the abandoned military post.

On September 18, 1861, General P.O. Hébert, the head of the Military Department of Texas, issued General Orders No. 1, which stated in part, “Colonel McCulloch will order the removal of the prisoners from Camp Verde and place them for safety in detachments at the different posts in his command.”5 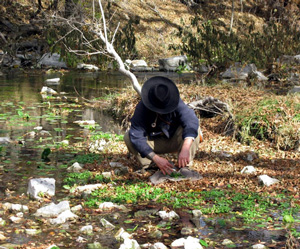 The restrictions imposed upon the Federal prisoners were fairly lax: the prisoners must remain within a quarter-mile from the center of camp at any given time, unless given written permission and accompanied by a guard. If a prisoner was to escape, all measures would be taken to recapture them; once transported back to camp, the prisoner would be placed in close confinement.

Due to the remoteness of the prisoner camp locations, the guards were instructed to carry side arms with them at all times. This guideline was created for the protection of both the guards and the prisoners. Unlike prisoner-of-war camps in the eastern U.S. (Elmira Prison in New York and Camp Sumter in Georgia, for example), the prisoners held at the frontier forts in Texas during this eight-month period were treated well. Col. Henry E. McCulloch stressed humane treatment, proper rations, and protection for the prisoners being held with his regiment on the frontier. By April 1862, the prisoners of war being held by McCulloch’s regiment were transferred to Fort Mason.

1 United States War Department. The war of the rebellion: a compilation of the official records of the Union and Confederate armies; Series 2 - Volume 1, p. 12, Washington, Government printing office, 1894. (OR)
2 Ibid, 40.
3 Ibid, 52.
4 It is unclear as to the exact date that the prisoners were transferred from Camp Van Dorn to Camp Verde, though correspondence in the Official Records (Ser.2, Vol. 1, 79-80), as well as the memoir of Stephan Schwartz (one of the prisoners), show the date to be in early September prior to the creation and implementation of “General Orders No. 1” on September 18, 1861.
5 OR, 89-90.
6 Stephan Schwartz. Twenty-two months a prisoner of war. p. 92 St. Louis: A.F. Nelson Publishing Company, 1892.