The Gardens at Fort McKavett 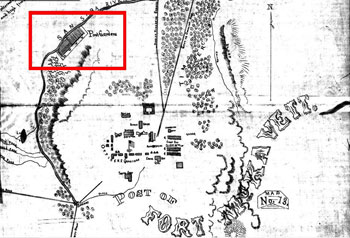 Throughout most of its history, the U.S. Army has issued food to soldiers in what are called “rations.” A “ration” is defined as “the established daily allowance of food for one person.”[1] During the years leading up to the Civil War, the daily ration for a soldier consisted of salted pork or beef, beans, and flour or bread. Coffee, salt, vinegar, soap, candles, and sugar or molasses were also issued for every one hundred rations—a full company. Depending on the year and current regulations, rations would also consist of dried vegetables such as potatoes, peas, or hominy. The availability of these vegetables was dependent on the Army’s situation.

In the years following the American Revolution and the War of 1812, the United States began an unstoppable march westward fulfilling what became known as “manifest destiny.” This expansion took place in areas that were occupied by Native American tribes and the U.S. Government tried to protect its ever-westward expansion by sending the Army to establish forts along the frontier. With expansion occurring at an incredible speed, these posts became increasingly isolated from their supply bases. Supply lines lengthened and logistics became a major concern for the top planners of U.S. troops. This was especially true in the largest and one of the newest states, Texas. 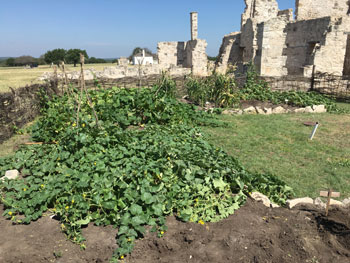 The massive and increasing expansion left many Army posts outside of a practical supply range. Even before Texas’ annexation, the problem of supplying western posts with full rations became apparent to top military leaders. In 1818, the Army ordered frontier posts to plant gardens in an attempt to ensure proper dietary practices among the soldiers as well as alleviate the strain on the already overworked Quartermaster and Subsistence Departments. These gardens would provide fresh fruits and vegetables to the soldiers living on the frontier, giving them essential vitamins and minerals not found in salt pork, beans, or flour.

Fort McKavett was no exception to that order and when the post was established in 1852, a garden was soon to follow. An inspection of the 8th Military Department (including Fort McKavett) in 1853 states, “Large gardens are cultivated at Fort McKavett, producing an abundance of the finest vegetables for the supply of the whole command.”[2] The gardens were established between a few small streams as they merged into the San Saba River, about 1/5 of a mile northwest of the post. The soil at Fort McKavett is very thin and overlays massive limestone lodes, making cultivation of vegetables impossible near the fort buildings. Instead, the soldiers produced their crops in the fertile soil near the river. 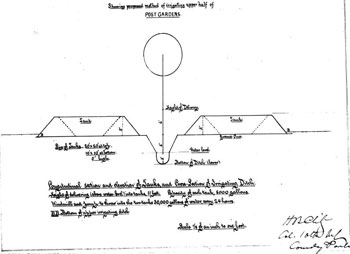 In the early years, the gardens remained relatively small. Popular crops included lettuce, sweet potatoes, tomatoes, radishes, squash, musk melons (cantaloupes), Spanish peppers (jalapenos), and pumpkins. These crops, grown in all the post gardens, were harvested in large numbers and added to the daily diet of the soldiers. Also cultivated were many other plants and herbs that were used to create homeopathic remedies in vogue at the time. Scurvy, a very real threat on the barren frontier, was managed by harvesting watercress, ensuring the soldiers were well supplied with Vitamin C.

The Fort McKavett post gardens were an amazing success. The gardens occupied nearly 32 acres and good irrigation became a problem for the gardeners. In 1876, a plan to overcome this problem was formulated that called for the installation of a windmill attached to an underground pipe system that would pump water into two holding tanks with a capacity of 8000 gallons each. The windmill was installed in July, 1877. Unfortunately, the windmill was destroyed in a severe storm before it could provide its services. 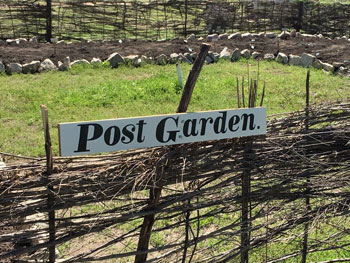 Today, the Fort McKavett site staff maintains a small demonstration garden at the site where they grow some of the same crops as the soldiers of the past and use them for interpretive programs. The modern garden is located near the Commanding Officer’s Quarters ruin and is maintained throughout the year.