With the outbreak of the Civil War and Texas’ secession from the Union in February 1861, the system of frontier defense forts in Texas came to an abrupt end. During the next five years, the defense of frontier communities fell to Texas state authorities, as the Confederate Government had the war in the east occupying the bulk of its military capacity. In response, Texas State Troop (TST) units were formed which, along with the Texas Rangers, patrolled the frontier in an effort to prevent Indian attacks and protect civilians. However, the State Troops and Rangers were largely undermanned to adequately patrol the vast, open frontier of Western Central Texas. The result was an increase in Indian raids in western settlements and mass migration of frontier settlers east to safer areas of Texas. During this time, the Texas Frontier was pushed back east toward Austin and San Antonio nearly 100 miles, with raiding occurring within 50 miles of the latter. The end of the Civil War in 1865 did not garner an immediate return of U.S. troops, either. They would not return to Fort McKavett until 1868 and it was during these intervening years that “the most noted and widely-known raid ever committed by Indians in the State of Texas”[1] occurred. 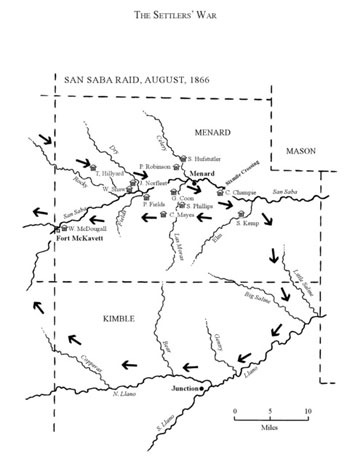 On August 6th, 1866, an estimated 200-300 Comanche Indians crossed the county line from the west between Rocky and Dry Creek, just a few miles north of Fort McKavett. The massive party swooped down the draws and came upon the ranch of Mr. Thomas Hillyard where they stole a number of cattle. From there, they continued down the draw to the ranches of Messrs. Jasper Norfleet and W.C. Shaw and drove off with just over 1000 head of cattle. From Clear Creek, where the aforementioned ranches were situated, the raiders crossed to the south bank of the San Saba River and rode off with nearly 800 cattle from a Mr. Patrick Fields on Fields Creek and continued eastward. The Comanches raided up and down Las Moras Creek, attacking the ranches of George Coon, Sam Phillips, Curt Mayes, William Vaughn, and Mr. Wickoff, driving off with an unknown number of cattle. A band of the raiding party broke off and hit the ranches along Celery Creek on the north bank of the river and absconded with livestock from Mr. Peter Robinson and Mr. Sanford Hufstutler before rejoining their compatriots. Continuing down the San Saba, the Comanches took 400 head of cattle from Mr. Charles Champie and over 200 from the Kemp Ranch on Elm Creek. At this point the party divided with the main body turning back west to skirt the south bank of the San Saba looking for stray or missed cattle from the earlier raids. A smaller party turned south and rustled cattle all the way into Kimble County to the Llano River.[2]

It was near Fort McKavett that the most dramatic events of the raid took place. During the preceding hours, no casualties were reported among the settlers in either Menard or Kimble Counties. This, however, was about to change. The day before the raid, William McDougall, a ranch owner who lived about one and a half miles south of the fort, was rounding up cattle in preparation of driving them to San Antonio with a compatriot, George Roberts. The day of the raid, McDougall returned home from the pen where the cattle were being readied for the drive to retrieve his horse, which had made its way home despite being injured. He left around 9 a.m., never to see his family again.[3]

A short while after his departure, the Comanches came upon the McDougall home. Jasper Newton, a local resident recalling the event over 50 years later, describes the confrontation as follows.

“A few minutes after he left, which was about 9 a.m., Mrs. McDougall sent Clara Schulenberger, a 16-year old daughter by a former husband to the garden to gather vegetables for dinner. The girl wore a large sun-bonnet and hearing the sound of horses feet, she looked up and saw a group of horsemen approaching, whom she took to be a cow outfit from the Conchos. These men dashed upon her and a white man on a powerful horse, ran over her knocking her down. She arose and ran screaming toward the house, which was only a few steps away. Mrs. McDougall ran to her and assisted her into the house, the girl did not know she had been wounded, but the brave mother saw the blood pouring from the wound when she helped her into the house, but she had no time for tears and condolence. The Indians, about 200 by this time, were leaping their horses over the fence into the yard and welling like demons. She closed and barred the doors of the little picket house in which she lived, and seized an old double barreled shot gun that had been out of fix for years, and which was only a keepsake in the family and had not been even loaded or fired for years, she was prepared to sell out as dearly as possible. It chanced to be house-cleaning day, and that morning Mrs. McDougal (sic) had moved nearly everything out of the house into the yard. The Indians fell to dividing up the plunder. They ripped open the feather beds and pillows, poured the feathers to the winds, and appropriated the ticking. They took everything they could carry off and destroyed the rest. Several could speak good English and would call to her to come out or else open the door and admit them. When one of them would approach too near, she would thrust the muzzle of that old worthless gun through a crack and threaten him with instant death, and he invariably made a dive to get out of range of the frowning old gun. (…) After having killed all the chickens on the place and taking all the household plunder they cared to carry away, the Indians left the McDougall place and not until they were out of sight did Mrs. McDougall find time to attend her suffering child. Upon examination, she found that Clara was indeed sorely wounded. The Indian’s lance had entered her back near the spine and had severed three ribs. There were no physicians nor surgeons in the country in those days, and the daughter was too grievously wounded to be taken to Austin or Georgetown. She lay four years a sufferer from that wound.”[4]

During the confrontation at the house, a few of the raiders took off after William McDougall.  They came upon him in the late morning and, seeing them, William spurred his horse and ran. The Comanches overtook him and it appeared later that he surrendered.  After catching him, they stripped him of all his clothing and began to torture him by pricking his back with arrows or other sharp objects.  He was apparently able to briefly escape and he dove into the river and swam across. He reached up and grabbed some bamboo that was growing along the opposite bank and was then shot. The bullet entered his upper back and exited through his throat, causing a quick, if not instantaneous, death. His body was found the next day still holding the bamboo and, somewhat surprisingly, with a full scalp. The small wounds in his back provided the evidence to assume that he had been tortured and killed in the manner described.[5] 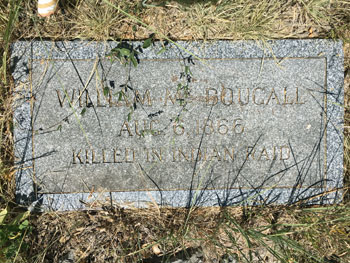 Following the raid, a total of 59 claims were made to the government that totaled 31,000 cattle lost, valued at $300,000. Even this is suspect, however, because some of the owners did not file claims “because Texas had been in the rebellion and [they] did not think the government would pay anything.” By 1916, 42 of the claims had been judged in the claimants’ favor, with 17 being dismissed or ruled against.[6]

Men from the surrounding area formed a posse of 53 to pursue the Indians and return the livestock. None of them believed Robinson’s estimation, thinking that the raid must have only consisted of 30-40 Comanches. That changed after riding through cattle trails up to a half mile wide and finding the remains of eleven horses that had been cooked in one spot, indicating that the party was large and that Robinson’s estimate was correct. An attempt was made to contact two companies of U.S. Cavalry operating in the area that were assigned to survey former posts for reoccupation. The officer in charge informed him that his mission was not that of fighting Indians, but of scouting out the frontier looking for fort sites. [7] As a result, the Comanches were able to escape to New Mexico, where the cattle were sold.[8]

The Comanche Raid demonstrated the need for Fort McKavett to be re-occupied by the U.S. Army, but it would not be until April, 1868 that the Army would return to Menard County. Under the Command of Captain Eugene B. Beaumont, elements of the 4th U.S. Cavalry reoccupied “old Fort McKavett” and began to rebuild the fort. By that time, William McDougall had been interred in the Fort McKavett cemetery for nearly two years. His grave is still present today. William McDougall was the only death perpetrated by Native Americans in the only attack in the vicinity of Fort McKavett.