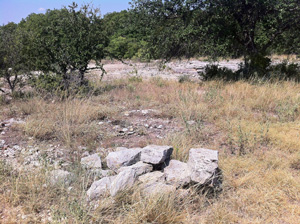 The location of Fort McKavett was approved by Gen. Persifor Smith on December 16, 1851, due to its proximity to the northern loop of the San Antonio–El Paso Military Road and the fresh water of the San Saba River. The location also provided a ready supply of limestone for building material.

There are three known limestone quarries within a quarter-mile of the lime kiln built by the soldiers at the site. The most extensive and accessible quarry is directly next to the kiln.

When construction of the fort began in 1852, the soldiers were fairly inexperienced in masonry. The government contracted with a German stonemason from Fredericksburg named Edmund Weigle to teach the soldiers how to cut and face the stones.

On August 19, 1853, during the first inspection of the post, Col. W.G. Freeman noted that “the buildings are put up of stone which is found immediately at hand and in great abundance and of a quality easily dressed.”

The method used by the soldiers at Fort McKavett to cut blocks of stone in the quarries is referred to as the “wedge and feather” method. It allowed a group of three soldiers to break loose a block of limestone weighing more than a ton in a matter of minutes. The three soldiers each had specific tasks within the crew: one to swing the hammer, one to hold the cold chisel and rotate it a quarter turn after each swing, and one to set the wedges and feathers.

The wedge and feather method utilized two pieces of iron shaped like the number seven (feathers) and a wedge. The soldiers drilled holes every 6 to 12 inches into the solid limestone with a hand-held cold chisel with a tip that was shaped like an asterisk or six-pointed star. A set of wedge and feathers went in each hole down the line. Soldiers then hit each wedge with a hammer, creating a fissure between the drilled holes. Within minutes, the block would break free of the quarry. The block was then cut into smaller pieces using the same method and transported to the building sites on a sled pulled by oxen or mules.

More than 40 buildings were constructed at Fort McKavett, all of them from limestone blocks quarried at the site.