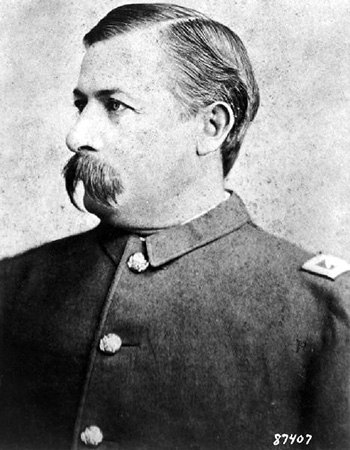 The most famous officer to command Fort McKavett was Colonel Ranald S. Mackenzie. During his tenure as commander, he led the 24th Infantry Regiment of “Buffalo Soldiers.” While his service at Fort McKavett was relatively brief, it was complicated by the presence of two lesser-known individuals. One was the post surgeon, a civilian named William Redford Sharpe. The other was someone whom Mackenzie and Sharpe both knew rather well, a young woman named Florida Tunstall, for whom these men carried a mutual affection.

Mackenzie was assigned to Fort McKavett in March 1869, roughly one year after its reestablishment in 1868. Relocating from Fort Clark, he oversaw much of the rebuilding of the dilapidated outpost and subsequent expansion to accommodate a larger garrison.[1] During his brief, two-year tenure as the commanding officer at Fort McKavett, he ensured many improvements were made to the fort.[2] In addition to his post command, he was the commanding officer of the 41st Infantry and oversaw its consolidation with the 38th Infantry to form the 24th US Infantry Regiment in October 1869.[3] He was also the commander of the Sub-District of the Pecos, which covered much of West Texas and the Trans-Pecos region.[4] This region, which includes the Chihuahuan Desert, was difficult to patrol with infantry soldiers alone and Mackenzie found he was unable to effectively carry out his duties in that area.

Colonel Mackenzie’s high rank and the nature of his command responsibilities required frequent travel to the 5th Military District Headquarters in San Antonio. The colonel could afford modest accommodations in the city and regularly boarded at the home of Warrick Tunstall, a lawyer from St. Louis.[5] The Tunstall family and Colonel Mackenzie formed an unusual friendship for the Reconstruction Era. Mackenzie was a Union Veteran and was seen as an occupying federal soldier; the Tunstalls were former slaveholders and staunch Confederates.[6] Despite these differences, the family appears to have developed a fondness for the young Colonel and he for them, particularly their daughter Florida. However, this fondness did not produce a courtship or engagement. A colleague of Mackenzie, Brigadier General James Parker, suggests in his memoir that Mackenzie believed unattached officers to be better leaders on the frontier.[7]  Other sources hint that it was Florida who developed the fondness more so than Mackenzie.[8] Whatever his reasoning, Mackenzie did not commit to a relationship with the young Miss Tunstall.

Enter William Redford Sharpe. Born in New Jersey in 1836, Redford became a doctor after earning his M.D. from the Medical College of Philadelphia in 1857.[9] During the Civil War, Dr. Sharpe served in the 6th New Jersey Volunteer Regiment and later in the 15th New Jersey Volunteers.[10] After the war, he moved to San Antonio and continued his practice of medicine as a civilian contractor for the U.S. Army.[11] From there, he spent time at many various Texas posts, including Fort McKavett.[12] In 1869, Sharpe met Miss Florida Tunstall at a dance in the famous Menger Hotel in downtown San Antonio. Despite his being nineteen years her senior, the two began a courtship and were married in October of that year.[13] That same month, the newly wed Dr. and Mrs. Redford Sharpe were assigned to Fort McKavett, where Mackenzie commanded.[14] 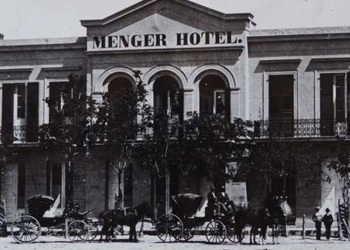 Approximately one year later, in October 1870, Colonel Mackenzie was relieved of command of the 24th Infantry and appointed commander of the 4th US Cavalry. He relocated to Fort Concho, near present-day San Angelo, and eventually to Fort Richardson, near Jacksboro.[15] Two months after Mackenzie’s reassignment, Redford Sharpe was replaced as Fort McKavett’s post surgeon and appeared to return to San Antonio.[16] Tragically, after less than four years of marriage, Dr. Redford Sharpe died of tuberculosis in March 1873.[17] Florida and her infant son, Redford Brian Tunstall Sharpe, moved back into her father’s house in San Antonio. She attempted to reconnect with Colonel Mackenzie through a pair of letters from Lieutenant Colonel William R. Shafter but no formal relationship resulted.[18]

In October 1883, then Brigadier General Mackenzie was given the command of the Department of Texas, moved to San Antonio, and became a frequent caller at the Tunstall house.[19] Florida, ten years a widow, apparently retained her affections for the illustrious officer because a marriage was announced for Christmastime 1883. Tragically, the ceremony was never celebrated. For months Mackenzie’s health, particularly his mental soundness, had been in decline.  He had been successfully masking his deficiencies but this became increasingly difficult for the General. Despite his near temperance throughout his life, he began to drink heavily.[20]

On the eve of his wedding, an altercation broke out between Mackenzie and a few citizens of San Antonio. This finally convinced his subordinates that he had lost his mental faculties and his ability to command.[21] Mackenzie was taken to Bloomingdale Asylum in New York where he was diagnosed as insane and was retired from the Army.  During his fitness hearing, he is quoted as having said, “I would rather die than go to the retired list.”[22] The “most promising young officer” and American hero, Ranald Slidell Mackenzie, died on January 19, 1889 in the care of his sister Harriet.

[10] John Young Foster, New Jersey and the Rebellion: A History of the Service of the Troops and People of New Jersey in Aid of the Union Cause, M.R. Dennis, 1868, 387.