The U.S. Dragoons and Fort McKavett 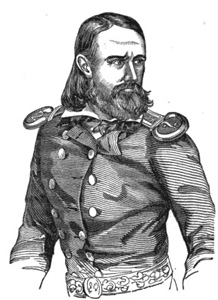 U.S. dragoon regiments fought during the War of 1812, but they were disbanded after the war when the military’s size was reduced. The dragoons were reorganized by an act of Congress on March 2, 1833. The size of each dragoon regiment was fixed at 34 officers and 1,715 men. The dragoons were elite units with strict weight and height guidelines for the men recruited to fill their ranks. During the Mexican War, the 2d Dragoons fought valiantly in every engagement, but they achieved special notoriety during the Battle of Resaca de la Palma on May 9, 1846, when two companies led by Capt. Charles A. May charged a battery of Mexican artillery and captured the eight Mexican cannons as well as Mexican Gen. Romulo Diaz de la Vega.

From November 1853 to August 1855, three companies (E, F, and G) of the 2d Dragoons were stationed at Fort McKavett. The highest number of dragoons on post was 175 in February 1854. During their time at Fort McKavett, they built most of the officer’s quarters and completed several of the barracks. The dragoons patrolled the area between Camp Concho (near present day Grape Creek), Fort Terrett, Fort Mason, and Fort Chadbourne. While at Fort McKavett, the 2d Dragoons were commanded by Capt. May, 2nd Lt. Charles E. Norris, Capt. Washington Newton, and Capt. Richard Anderson. 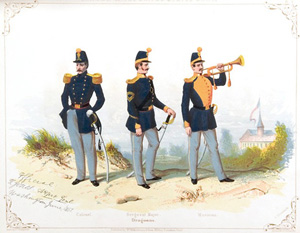 The dragoons stationed at Fort McKavett were largely composed of men of Irish or German descent, similar to the rest of the antebellum Army, who were in their 20s with most being “of average height and below average build,” according to the enlistment descriptions. The dragoons wore a uniform that was influenced by the French uniform of 1851 with its shako and trimmed frock coat. This was replaced on the frontier with “corduroy pants, a hickory shirt or blue (wool) flannel shirt, cut down in front, studded with pockets and worn outside; a slouched hat and long beard, cavalry boots worn over the pants, knife and revolver belted to the side and a double barrel gun across the pommel, complete the costume as truly serviceable as it is unmilitary.” This description from 1855 shows that they followed a “uniform” similar to the Texas Rangers that were operating in the general vicinity of Fort McKavett during the same period.