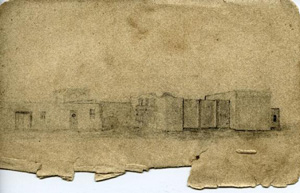 George Fulton was a young schoolteacher in Indiana in 1836 when the war for independence from Mexico erupted in Texas. Whether moved by adventure or in hopes of a large land reward, Fulton and 60 men set out for Texas in a flatboat. Their voyage down the Wabash, Ohio, and Mississippi rivers may have taken as long as 12 weeks. The volunteers arrived in late summer/early fall of 1836. The war with Mexico was over, and Fulton stepped onto the shore of a new country—the Republic of Texas.

Though he had missed the revolution, Fulton joined the Army of the Republic of Texas. He served as a second lieutenant for six months. Fulton described his uniform as a “…pair of pantaloons, worn out at the knees and patched behind. A coat without tails worn threadbare at both elbows.” 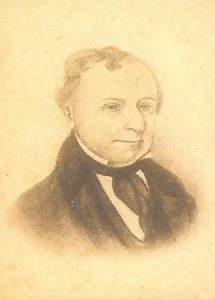 Fulton trekked across Texas, first as a soldier and later as a draftsman for the General Land Office. He recorded his impressions and made sketches of important places in his journal. While in San Antonio, Fulton made a sketch of the Alamo approximately one year after the 1836 Battle of the Alamo.

In the fall of 1837, Fulton met with Secretary of the Treasury Henry Smith in the capital city of Houston. Fulton hoped to exchange his soldier’s warrants for money. The government had paid soldiers in warrants or I.O.Us to be exchanged later. The Republic was in debt though, and Smith, unable to pay Fulton from government funds, gave him a personal loan. The two became close friends, and three years later, Fulton married Harriet Gillette Smith, becoming Henry Smith’s son-in-law.