Ride the Rails to Rockport 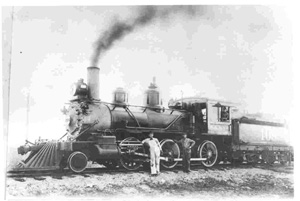 Shortly after moving back to Texas in 1868, George Fulton pushed to bring the railroad to the Rockport area. Cattle businesses transported their products using steamships, but George knew a rail line would give the industry easier access to northern markets.

In 1884, Uriah Lott chartered the San Antonio & Aransas Pass Railroad (SA&AP). The Coleman-Fulton Pasture Company ceded the right-of-way for the SA&AP to build part of the rail line through ranch lands. George also ceded private lands for rail expansion into Fulton. It is possible that his assistance with the rail line led the SA&AP to name a locomotive the George W. Fulton, Jr. 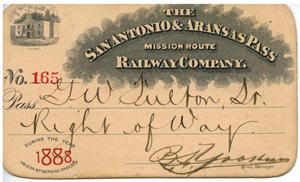 In July 1888, the SA&AP finished the branch line to Rockport. According to family history, the Fultons hosted a large banquet in their home for passengers arriving on the first train from San Antonio.

With the arrival of the SA&AP, Rockport began to grow as a fishing, hunting, and beach resort destination. Four trains arrived daily in Rockport. Trolley cars transported visitors from the depot to hotels, ice cream parlors, an opera house, bathing pavilions, and beaches. Private hunting and fishing clubs catered to visitors by providing transportation to and from club properties. 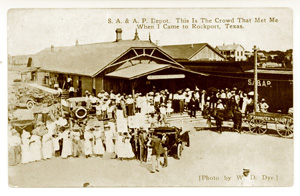 The SA&AP owned special excursion cars that often came to Rockport. The Fern Ridge, a hunting car, had game racks, ammunition lockers, open platforms, and a sliding side door so hunters could shoot game animals from the car. The Electric, a plush private car, entertained Texas “Nobility,” including sponsors of the railway and frequent commercial clients. George Fulton had his own right of way pass for the SA&AP.

With the arrival of the rails, the population of Rockport grew from 601 to 2,500 within 10 years. Its depot is one of the few SA&AP depots still standing on its original site: at the corner of North and Magnolia streets in the Rockport Heritage District. Passenger rail service ended in the 1940s, but freight service continued until 1985.