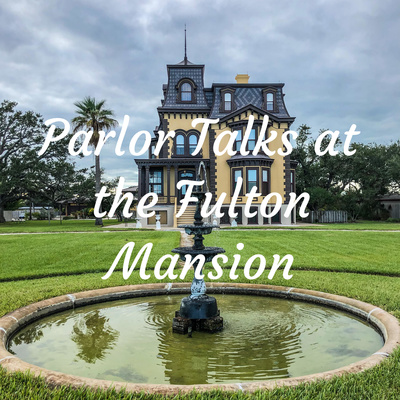 Site educators, Joseph Fox and Ashley Thornton, explore different and unique stories surrounding the Fulton Mansion and the lives of George and Harriet Fulton here on the Texas Coast. Episodes are recorded in the Parlor Room of the Mansion which was the room where the Fultons entertained and told stories to friends and family members.

In today’s episode, Ashley and Joe discuss the latest exhibit on the hurricane history of the Fulton Mansion, “It’s Still Standing…”. They dive into the Fulton Mansion’s recovery after Hurricane Harvey five years ago as well as past storms that have impacted our region.

Episode 19 - Aransas County and The First Flag Over Texas

In today’s episode, will be getting into the story of the first official American flag raised over Texas right here in Aransas County. It’s an interesting story that takes back to the debate over Texas Annexation in 1845 and when Zachary Taylor was marching an army south to Mexico. First, they made a stop here out on San Jose Island...

In today’s episode, we dive into another important holiday with origins in Texas, the holiday of Juneteenth celebrating news reaching Texas of the Emancipation Proclamation. To show the impact of this holiday, we highlight the story of Walter Rimm, a slave born in Ingleside who went on to become a cook for the King Ranch.

This episode is part one of an oral history that Joe recently did with a direct descendent of the Fulton’s, Mr. Kip Foss. They discuss a large treasure trove of Fulton documents that Kip recently donated to the Mansion and dive into Fulton family history.

Episode 16 - Steamboats of the Coastal Bend with Justin Parkoff

In an era before railroads and automobiles, steamboats were the quickest way to get around on the Texas Coast and the surest way to traverse Texas rivers to bring supplies to frontier settlements. In this episode, Joe is joined by the Justine Parkoff, the Executive Director of the Texas Maritime Museum, for a discussion on steamboats in the Coastal Bend of Texas and their connection to the Fultons. Note- Joe mentions the story of George Ware Fulton Jr. riding the SS. Mary on a trip from Rockport to Louisiana as accessed in a journal entry. It's a lengthy description so instead of posting it here, expect another podcast talk on George Jr. and steamboats coming soon!

Episode 15 - Architecture of the Fulton Mansion

With not only the unique design and towering height but also the innovation required to build it, the Fulton Mansion stands out among historic homes on the Texas Coast. In this episode, Joe and Ashley explore the architecture of the Fulton Mansion and why George and Harriet's home still stands out to visitors today.

Episode 14 - A Gift from Commodore Moore: The Fulton's Connection to the Hero of the Texas Navy

Join us as Joe and Ashley dive into another story from Texas History, that of Commodore Edwin Moore and the Texas Navy. The connection to the Fulton’s is found in a letter between George and Harriet where a Commodore Moore delivering a package to Harriet is mentioned. Who was Commodore Moore? What impact did he have on the course of Texas History? Tune in to find out because this is a pretty cool story!

In this episode, we finish the story of the Irish empresario James Power and his odyssey here on the Texas Coast. Today, we’ll get into the story of Power after the Texas Revolution and the role he played not only as a community builder but also in Texas’s Annexation into the United States.

Today's episode is the final part of the oral history that Joe conducted with Ruth Davis on her time as a park ranger at the Fulton Mansion. In this finale, Ruth discusses life in Rockport after she left the Fulton Mansion but also how the Mansion remained a part of her life. We also talk about an incident where a doll was stolen from the Mansion, Director Diana Kirby (who’s leadership made the Mansion what is today), and Ruth’s experience during Hurricane Harvey.

In this episode, we are picking where we left off in the story of the Irish empresario James Power and his odyssey here on the Texas Coast. We’ll cover the founding of the town of Refugio and Power’s role in the Texas Revolution.

In today’s episode, we’re airing part three of the oral history that Joe conducted with Ruth Davis who was a park ranger at the Fulton Mansion back in it’s early days under the Texas Parks and Wildlife Department. Joe and Ruth’s conversation will give you a picture of not just the Fulton Mansion but Rockport in the 1980s.

James Power, an Irish empresario who brought Mexican, American, and Irish colonists to his Texas coast colony between the Guadalupe and Nueces rivers, is an oft-overlooked figure who played a huge role in the history of the Coastal Bend. In this episode, we explore why Power came to Texas from Wexford, Ireland and the dream he had of starting a colony in Coahuila y Tejas back in the 1820s...

Episode 8 - Ruth Davis Oral History Part 2: Staff, Volunteers, and Others From The Early Days of The Fulton Mansion

In this episode, we continue with part two of the oral history that educator Joe Fox conducted with a longtime contributor to the Fulton Mansion, Ruth Davis. Ruth and Joe talked about when the Mansion opened to the public back in 1983 under the Texas Parks and Wildlife Department. Although today the Fulton Mansion is a historic site under the Texas Historical Commission, we are still in debt to the early curators, docents, and volunteers who helped grow the institution in its early days.

Episode 7 - The Fultons and Aransas County: A Special Sesquicentennial Episode

We’ve been building up to this milestone in our community for a while with our Live Oak Legacy exhibit but also in assisting with the celebrations happening all across our community this month. In today’s episode, we wanted to offer a brief retrospective on the history of Aransas County and how it’s changed with the different groups of people who’ve called this slice of Texas Coast home. By looking back at the story leading up to when Aransas County was formed in 1871, we can gain an appreciation for how much our community has grown in these past 150 years...

Back in January of this year, Ruth Davis was kind enough to sit down with educator Joseph Fox for an oral history at the Fulton Mansion's visitor center. Ruth was a park ranger back in the early 1980s when the Fulton Mansion had just opened to the public under the Texas Parks and Wildlife Department. Divided into several parts, today's episode covers Ruth's upbringing, how she came to the Texas Coastal Bend, Rockport, and then the Fulton Mansion.

Episode 5 - What is an Aransas? The origin of our county's name.

On visiting Aransas County you may have asked yourself, what is an Aransas? On today's episode, On today's episode of Parlor Talks, the Fulton Mansion newest educator, Ashley Thornton, joins in to discuss where the term originated from and how it came here to the Texas coast. The story takes us from the earliest Spanish explorers of Texas to the Fulton's time building an early town on the Live Oak Peninsula, Aransas City.

Cinco de Mayo is typically seen as a holiday for parties, food, and beer. However, it's roots lie in Mexico's War for Independence against the French and the hero of the story, Ignacio Zaragoza, has surprising roots here on the Texas Coast. Tune in to hear heroic Zaragoza's story which began in the town of Goliad...

In this episode, we shift our focus to Harriet's childhood and teenage years growing up in Missouri and Texas and living through the Texas Revolution. How did the Smiths end up in Brazoria? What did Harriet and her family experience during the Texas Revolution? How did George and Harriet meet? Tune in to learn more!

Episode 2 - George's Journey Through the Early Republic of Texas

This episode recounts George's journey through the early Republic of Texas. After his army service in 1837, George became a surveyor for the General Land Office. In his diary, he recounts his travels between San Antonio and Houston amongst legendary Texas figures like Crockett, Smith, and Seguin.

In this first episode of Parlor Talks at the Fulton Mansion, we’ll be discussing George Fulton’s early experiences as a young man exploring the Republic of Texas from 1836 to 1837. George travelled to Texas and enlisted as a soldier in the Texas Army during a time conflict and upheaval but, also opportunity. In this episode, we’ll focus on George’s early life, Texas after the Battle of San Jacinto, and George’s military service to the Republic of Texas.