Charles Richardson, also known as “Uncle Charlie,” is perhaps one of the more colorful characters in the Magoffin family story. Married to Josephine Magoffin, he was a close friend, cousin, and brother-in-law of Joseph Magoffin and led an interesting life tied closely to Magoffin family history and lore. 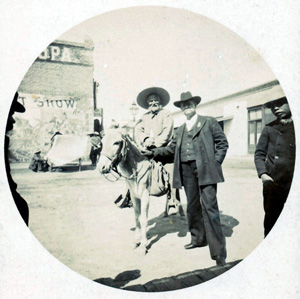 Charles’ obituary reveals the most about his family background. He was born in Wilkinson County, Mississippi, in or near Woodville. His parents were Francis Rivers Richardson and Sarah Magoffin Richardson. Sarah was a daughter of Beriah and Jane McAfee-Magoffin of Harrodsburg, Kentucky and a sister of James Wiley Magoffin. Charles attended school at Lafayette Institute in Lexington, Kentucky, his cousin Joseph Magoffin’s alma mater. Because their ages are so close, it is likely that Joseph and Charles attended classes at the same time for at least a couple of years.

Though he was the fifth child in his family, Charles apparently inherited his father’s estate, since his sister Martha, the only other surviving child, had married a decade earlier. It is also possible that Charles and Martha inherited some money from their grandfather. Whatever the case, Charles had significant wealth.

Josephine was born in Mexico around 1835 to James Wiley Magoffin and María Gertrudis Valdés-Magoffin. Her obituary described her as a “cultured lady, possessing rare Christian qualities, courteous and charitable to all.” Josephine had been attending the Convent of the Visitation school in St. Louis since the Magoffins move from Chihuahua to Independence, Missouri in 1845. If she was the oldest of the Magoffin children (this has not been confirmed), it is quite likely she graduated sometime in the early 1850s.

So how did Charles and Josephine meet? We can only assume it was because of the family relationships (Charles was first cousin to Josephine on his mother’s side) and Charles’ schooling with Josephine’s brother Joseph. Some sources place Charles in St. Louis tending to issues regarding his parents’ estate in the mid-1850s. Josephine was also in the St. Louis area, so they could have courted there. We do know that the Catholic Archbishop of St. Louis performed marriage rites for Charles and Josephine in St. Louis on January 15, 1856.

Today, first-cousin marriages are prohibited in about half of the United States, but those laws mostly passed after 1900. No state prior to the Civil War prohibited first-cousin marriage. Within the Catholic Church, a couple such as Charles and Josephine would have had to seek and be granted a dispensation permitting their marriage. Unfortunately, records in the St. Louis archdiocese for marriage investigations are not presently available to researchers so we are unable to obtain more information about their dispensation request. 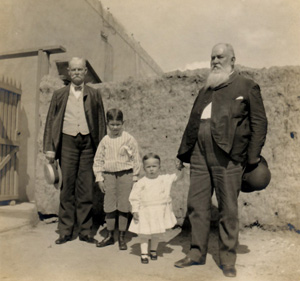 It is not clear where the Richardsons lived when they first married in 1856, but two years later the couple moved to Magoffinsville, Texas, where Charles had a business partnership with his uncle/father-in-law, James Wiley Magoffin. Their firm was known as Magoffin & Richardson, post traders at Fort Bliss. For an unknown reason, the Richardsons left Magoffinsville around 1860 and returned to the St. Louis area, where they lived on a farm until 1866.

We do not know what the Richardsons did during the Civil War other than continue farming. Joseph Magoffin apparently maintained a close relationship with his sister Josephine. Several late-war documents (including his discharge papers) indicate that Joseph considered St. Louis home. We also know that Joseph visited St. Louis at least once in early 1866.

It appears from correspondence that Charles was considering accompanying Joseph back to El Paso after their farm sold in 1866. They subsequently appear in an undated entry for the late 1860s as new residents of El Paso County, Texas. This is affirmed by the 1870 census, which indicates that Charles and Josephine were living in the same household as Joseph’s family.

Various accounts over the next couple of decades, as well as family stories, state that Charles was an entrepreneur living in El Paso del Norte (what is today Cíudad Juarez), occupying a similar social status across the river as Joseph held in El Paso. Few details have emerged, though, as to exactly what he was doing. The only thing we are certain of is that he served as U.S. Consul in El Paso del Norte from March 1880 to January 1884. In the 1885 El Paso/El Paso del Norte city business directory, Charles is listed as a “contractor” across the river. He also had a large orchard and vineyard; his landholdings were supposedly in the area of Cowboy Park, which was built after he left Cíudad Juarez in 1907.

Charles was well known in the communities on both sides of the river. In his obituary, he was described as having an “engaging personality, and the closer one got to him the more they loved and admired him. Though outspoken and perfectly frank...his innate courtesy and kindness of heart prevented him from ever carelessly wounding the feelings of any person.” Although he and Josephine never had any children of their own, they were close to their niece and nephew. At the time of his death, the newspaper reported that Charles was accustomed to spending each afternoon playing with his grandnieces and grandnephews, and that he and his brother-in-law Joseph were so close they were like true brothers.

After Josephine’s death in 1886, Charles was heartbroken and reportedly lived intermittently with the Magoffins. He apparently retired about 1903 or 1904 and moved back into the Magoffin Home. He died of heart failure while napping at the home in 1911 at the age of 76. His funeral was conducted at the Magoffin Home by the El Paso Pioneers Association, followed by burial in the Magoffin family plot at Evergreen Cemetery. Although he had enjoyed great wealth throughout his life, he died with little to his name and had a simple service, which apparently was the way he wanted it.