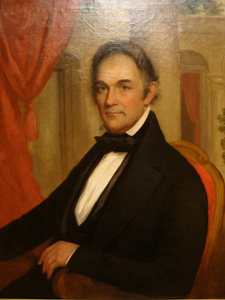 An adventurer at heart, James Wiley Magoffin braved the frontier to become a successful, respected trader and businessman in Mexico and the United States in the 1800s. James Wiley is best known for arranging for the “bloodless conquest” of Santa Fe during the Mexican-American War. Though he loved Mexico, he made extensive land purchases along the Rio Grande and created the settlement of Magoffinsville around 1849, a forerunner of present-day El Paso and an early site of Fort Bliss. James Wiley is remembered for his love of his family and his dedication to western expansion.

James Wiley was born in Harrodsburg, Kentucky in 1799, the oldest child of Beriah and Jane Magoffin. He had six brothers and three sisters. His father had emigrated from Ireland. Virtually nothing is known of his childhood or education. Why James Wiley left Harrodsburg and traveled to Mexico is a mystery. Did calls for merchants or settlers from the newly independent Mexico attract his attention? Whatever it was, sometime in the early to mid-1820s, James Wiley found himself in the areas of Matamoros, Monterrey, and Monclova/Saltillo in northern Mexico.

James Wiley soon became a prominent American working as a merchant and businessman in Saltillo. He was a landowner, and he invested in the first attempts to bring cotton ginning to the Rio Grande Valley. He was appointed American Consul in Saltillo by President John Quincy Adams in 1825 (though there is no evidence that he ever filled the role), and was solidly involved, along with his brother Samuel, with the so-called triangle trade between New Orleans (the U.S.), the Texas coast, and Matamoros. It is not outside the realm of possibility that James Wiley’s business interests were involved with some of the earliest Texas empressario grant colonies, such as that of Stephen F. Austin and the Old Three Hundred in the 1820s and ‘30s. He was known throughout this region by his many friends, colleagues, and associates as “Don Santiago.” By the mid-1830s, James Wiley moved his business enterprise and all his trade interests to Chihuahua and began focusing on the Santa Fe and Chihuahua trade routes.

About the time of his move to Chihuahua, James Wiley began living with a married woman named María Gertrudis Valdes-Farías, who was from the Monclova/ Saltillo area, the same region where Magoffin had originally resided. Both James Wiley and María moved to Chihuahua around 1832 and began having children. María’s first husband, José Marcos Farías, died in 1838. Six months later, James Wiley and María filed their marriage application with the church and got married sometime in early 1839. It is believed that María had four children with her first husband and eight more with James Wiley. Due to a lack of original or accurate records, it is not clear if all the children credited to James Wiley were actually his biological children. He may have adopted some of María’s children from her first marriage. Future research may solve this mystery.

James Wiley was very active in arranging for trade caravans back and forth between Chihuahua, Santa Fe, and Missouri. He worked with many other well-known merchants, including Josiah Gregg, James Harrison, and the Glasgow brothers. James Wiley had other business interests as well. He employed or partnered with several of his family members including his brother Samuel and brother-in-law Gabriel Valdés. Though his motives are unknown, Magoffin purchased a farm from Harmon Gregg (father of merchant Josiah Gregg) near Independence, Missouri and moved his family there in 1844. Unfortunately, his wife María died on the Missouri farm in 1845. Supposedly one reason James Wiley bought the farm was to raise mules, which he could then sell to merchants and others planning to depart from Independence down the Santa Fe Trail. His Missouri farm was also a popular stopover for merchants and troops starting down the trail. So although James Wiley was living in the U.S., he still had business dealings in the Republic of Texas and in Mexico.

In May 1846, James Wiley met with President James K. Polk, who asked him to be an envoy for the U.S. government in the forthcoming campaign by the U.S. Army to invade Mexico. James Wiley was to be a secret envoy opening the way for American troops. He hurried to catch up with Col. Stephen Watts Kearney and his U.S. troops at Bent’s Fort, Colorado near the end of July. He went ahead of the caravan to speak with Nuevo Mexico Gov. Manuel Armijo. Although the specifics of the conversation are not known, Armijo ordered his troops to abandon Santa Fe and withdraw south. Thus, James Wiley is credited with facilitating what some historians have called the “bloodless conquest of Santa Fe.” After about a month, the caravan started south. James Wiley again went ahead into El Paso del Norte and Chihuahua. In November 1846, he was taken into custody by Mexican authorities, along with other members of his party. He was arrested but the specific charge is unknown (it may have been for treason against Mexico). He was sent to a prison in Chihuahua City, where he was held until the end of the Mexican-American War in 1848. 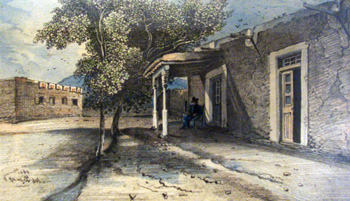 Around 1849, James Wiley began organizing another trade caravan from Independence to Chihuahua. When Magoffin reached the new U.S.–Mexico border town of El Paso del Norte, he found that duties and import fees had been substantially increased. So rather than continue with his trip, he set up a hacienda and trade center across the river from El Paso del Norte, and sold his farm in Missouri. His mercantile served the local populace and the sudden surge of Americans traveling west to the gold fields of California. His place of business soon became known as Magoffinsville—one of a handful of small settlements organized by Americans on the north bank of the Rio Grande. By 1854, the U.S. government had leased much of Magoffinsville for a permanent military post that later became Fort Bliss. Magoffinsville was located about halfway between Santa Fe and Cíudad Chihuahua.

James Wiley had extensive contacts in both Mexico and the American Midwest. One of his Mexican business partners was José Cordero, supposedly the richest man in the state of Chihuahua and a governor of that state in the 1850s. James Wiley became a key player in local trade interests, a major landholder in Texas, and a supplier to the U.S. Army. Around 1850, James Wiley married his sister-in-law Dolores Valdés.

During the Civil War

James Wiley was always politically savvy but there is no evidence that he was ever personally active in politics until the start of the Civil War. In 1860, he was appointed Brigadier General of the state militia (though he never actually commanded any troops). When hostilities broke out in early 1861, James Wiley had extensive personal and business interests, which he immediately sought to protect. It is unclear how much his business dictated his politics as opposed to his personal beliefs, but James Wiley declared himself with the Confederacy. He also served as a state senator for El Paso in the 10th Legislature. When federal troops abandoned Fort Bliss in March 1861, he and Simeon Hart immediately moved in to claim the post for the Confederacy (as well as to protect his landholdings). James Wiley was very active in supplying and assisting the Confederate Army of New Mexico. After the Army of New Mexico’s defeat at the Battle of Glorieta Pass and its subsequent retreat, nearly all the Magoffin family members left El Paso for San Antonio with the exception of James Wiley’s wife, Dolores Valdés-Magoffin, who moved across the river to stay with her family.

When the war ended, it appears that James Wiley was set on returning to El Paso. In November 1865, Texas Gov. A.J. Hamilton issued a commission to James Wiley giving him authority to organize a militia to garrison Fort Bliss and later his authorization to reorganize El Paso County government.

In December 1865, the U.S. Marshall auctioned off several Confederates’ properties in the El Paso and Mesilla area, and James Wiley’s lands were sold. James Wiley returned to El Paso in May 1866, arriving on the first stagecoach carrying official mail from San Antonio. With his documents from Gov. Hamilton, James Wiley apparently expected to reclaim his land, his life, and local government. Instead, he found unsympathetic Unionists who told him the general post-war amnesty granted to most Confederate citizens did not include him. Only a presidential pardon would reinstate him. He left for Washington in June to file for amnesty, but his formal pardon application was not submitted or approved until September 1867. Magoffinsville was destroyed by flooding in the summer of 1867. The loss of his hacienda and lack of immediate business options, no doubt, troubled him greatly.

By summer 1868, James Wiley was residing in San Antonio and his health was rapidly deteriorating. He was suffering from dropsy, known today as edema. In late August, James Wiley prepared legal documents to sell all his land holdings and claims to his son, Joseph, who would eventually reclaim his father’s property. On September 27, James Wiley died at his daughter Annette’s home. He was initially interred in the Dwyer Rancho family vault belonging to his son-in-law’s family. Several decades later, when the Dwyer family decided to sell their ranch, those buried there, including James Wiley, were removed to the San Fernando Cemetery No. 1 in central San Antonio. He was gone but his adventuresome spirit remained alive in the memory of his descendents and in the tales of the southwest borderlands.