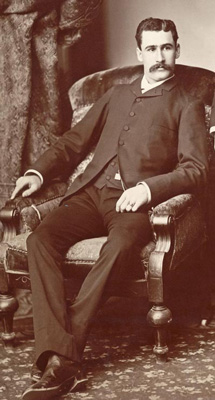 Joseph Magoffin’s first child was born shortly after his marriage to Octavia, prior to the end of the Civil War. Named for Joseph’s father, James Wiley Magoffin generally went by either Jim or J.W. He was very young when his parents moved back to the El Paso area in the late 1860s, so El Paso was always Jim’s home.

Little is known about Jim’s early education. Preliminary information indicates he attended school at St. Mary’s in San Antonio. He subsequently went to Indiana and took courses at The University of Notre Dame. According to records there, he enrolled on September 25, 1882 at the college level and majored in the two-year commercial course (what today would be called business). Only completing the first year, he did not graduate with a degree but received premium awards for excelling in Spanish and vocal music. A Notre Dame archivist notes that this was not at all unusual at the time; just indicating that you had been accepted and completed some coursework at Notre Dame gave you a leg up in the business world.

While we do not know why Jim did not return to Notre Dame in the fall of 1883, we can reasonably speculate that the 19-year-old returned home to assist his father with his mayoral re-election bid in August of that year.

Jim held a variety of jobs over the next 25 years, almost all business-related. He worked in the Customs House in El Paso at two different times. When his father Joseph became collector of customs in August 1885 after the end of his second mayoral term, Joseph appointed Jim as a special deputy collector in the office, a post he held until about 1888. His second period of service was under Collector Charles Davis from 1893 to 1898. During the years in between, Jim was superintendent of the street car system (Joseph and Jim both were shareholders and officers), a freight and passenger ticket agent for the Santa Fe Railway (including for a time in Mexico), and an agent for the Texas and Pacific Railroad. Following the customs work in 1898, Jim was the agent (probably area distributor) for the San Antonio Brewing Company at an office on the corner of Kansas and Main. In 1902, he bought into a real estate and insurance business on South Oregon Street, which he owned the rest of his life.

With the prominent political activities of his father Joseph, it is of little surprise that Jim also was active in El Paso politics. He served two terms as alderman (1890–93, 1903–05) and as county treasurer (1910 to circa 1912). Newspaper accounts indicate he was active in the Democratic Party and ran for or was considered for several other political positions. He was probably a delegate to several state party conventions.

Jim was as active socially as his parents, and he was a well-known young bachelor in the 1880s and ‘90s. He was among those in attendance at “The Young Man’s Ball” in May 1883, co-hosted by his mother Octavia at Schutz’s Opera House. Jim was active in organizing many social and charity dances. He was also active in the El Paso (Social) Club, the Masons, and the Elks. 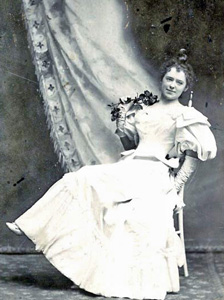 Probably through his social activities and his work at the Customs House, Jim came to know and eventually marry Anne Buford, the daughter of Colonel L.M. Buford, the American consul in Cíudad Juarez. They had a quiet and simple wedding, which took place on Jim’s parents’ wedding anniversary, March 1, 1897.

Jim and Anne had four children. Their first child, Anne, was born nine months after their nuptials. Anne was followed eighteen months later by Joseph Jr., then Mary four years later, and James Wiley Magoffin Jr. a year after that.

Throughout much of his life, Jim and his family resided at the Magoffin Home. It was around 1901 that they moved out on their own, but not more than a couple of blocks from the Magoffin Home. After financial problems in the early 1900s, they moved back into the home in 1907 and then back out in 1910.

No doubt everyone in the community was shocked when Jim, age 49, died in late 1913 at the Hotel Dieu hospital. Local newspapers reported that Jim had peritonitis as a result of a burst appendix. This unexpected development had a substantial impact on Anne and the children. Within a couple of years, Jim’s family had moved back into the Magoffin Home.

Over the next decade, Anne became the caregiver for an elderly Joseph Magoffin. Young Joseph Jr. was reported as being an usher at the Wigwam Theatre, then as a carrier for the El Paso Herald. By 1918, Anne was a teacher at San Jacinto School, while Joseph Jr. was clerking at an auto supply store, then at the telephone company. By the 1920s, Joseph Jr. has begun working in his chosen career as a bank bookkeeper, and Mary had joined her sister as a teacher at San Jacinto School. In 1922, James Jr. was a salesman at the Popular Dry Goods Store. Through all these years, Anne Buford-Magoffin is listed simply as a widow with all five family members living at the Magoffin Home. All of Jim’s family members were particularly close to their grandfather, Joseph Magoffin. 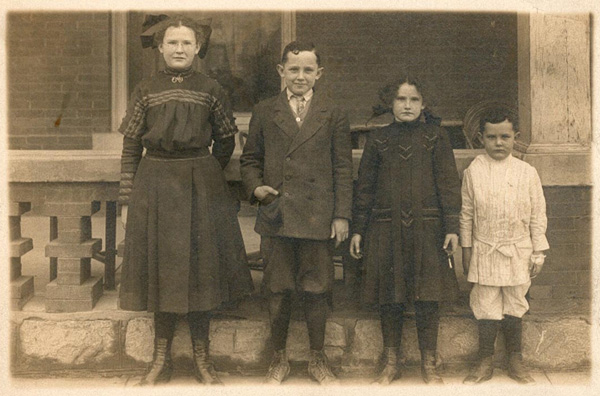 Anne’s family suffered several more losses in the years after her husband’s death. In August 1924, Anne Magoffin-Fletcher had the first of Jim and Anne’s grandchildren. However, both mother and child died within nine months. In 1926, Joseph Magoffin passed away and left the house to Jim’s sister Josephine.

With the loss of her father-in-law, eldest daughter, her first and only grandchild, and a stable and certain home, Anne Buford-Magoffin decided to move her family to California. By the time of the move, both James Jr. and Joseph Jr. were working in the banking field. Mary Carter joined them in California, and they lived the rest of their lives in the greater Los Angeles area.

Anne Buford-Magoffin passed away in 1962. The three remaining children died in California in the order they were born, all at age 88 or 89.