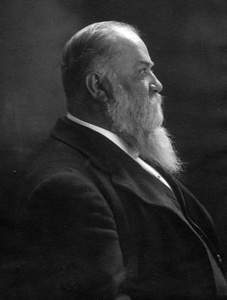 Born in Chihuahua, Mexico and educated in Kentucky and Missouri, Joseph Magoffin first came to the El Paso area in 1856 to work in his father’s mercantile at Magoffinsville. After serving in the Civil War, Joseph returned with his family and became an advocate for the development of El Paso and the region. A successful businessman and community leader, Joseph Magoffin left a significant legacy.

Joseph, the second son of James Wiley Magoffin and María Gertrudis Valdés-Magoffin, was born around 1837. He grew up in the interior of Mexico where his father had a trade business. In 1844, his father moved the family to Independence, Missouri. After the death of Joseph’s mother in 1845, James Wiley took Joseph and his older brother Samuel to Lexington, Kentucky, where he attended Lafayette Institute for several years and then Wyman’s High School in St. Louis. After he graduated from high school (about 1855), Joseph joined his father in Magoffinsville, Texas and took part in the family’s mercantile business.

With the outbreak of the Civil War, Joseph and his brother Samuel joined the Confederate army as part of General H.H. Sibley’s brigade. Both were part of the Confederate withdrawal to San Antonio after the Union victory at the Battle of Glorieta Pass in March of 1862 and then were transferred to Marshall, Texas. As a quartermaster, Joseph helped procure supplies for Confederate forces in East Texas, Arkansas, and Louisiana. By 1864, Joseph had been promoted to the rank of Major. In August of that year, his brother Samuel died in the war. Joseph’s brigade was stationed in the Houston/Galveston area a few times between 1862 and 1864, and this is where he met his future wife, Octavia McGreal. Octavia was the daughter of prominent Houston-area lawyer and plantation owner Peter MacGreal. Her brother Clarence was stationed with Joseph, apparently providing the couple an opportunity to meet. They were married in Harris County on March 1, 1864. Octavia quickly became pregnant and gave birth to their first child, James Wiley Magoffin (Jim), in 1865. 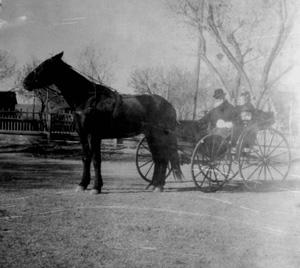 At the end of the Civil War, Joseph was unsure where he would go with his young family. Octavia stayed in the Houston area while Joseph traveled to St. Louis. But as the health of Joseph’s father waned in late summer 1868, he focused again on El Paso. Almost all of his father’s landholdings, claims, and interests were still in this area, all of which transferred to Joseph upon his father’s death. Within a few months of James Wiley’s death, Joseph and his family moved to El Paso so he could begin the legal efforts to reclaim the Magoffin landholdings, much of which were seized by Unionists during the war. His father’s homestead at Magoffinsville had been destroyed by massive flooding of the Rio Grande in 1867.

Joseph held several jobs when he first returned to El Paso. In addition to a clerk job at Schutz’s store, he was hired as a guard for the federal customs service in El Paso, patrolling the river. In December 1869, Joseph ran for public office for the first time. He was elected Justice of the Peace, a county position he held until 1874 when he was elected as a county commissioner. Two years later, he became a county judge and concurrently served a brief term as alderman. In the 1870s, Magoffin lands seized by Unionists were returned to Joseph, and the family’s personal wealth increased. In November 1873, Octavia and Joseph welcomed their second child, a daughter they named Josephine Richardson Magoffin.

With their family growing and fortunes starting to settle, Joseph and Octavia decided to build a new home on a portion of the family’s land around 1875. They built a seven-room adobe home about a mile east of downtown El Paso on the old road to Magoffinsville and San Antonio. The site had ready access to the El Paso canal (acequia), which they used to irrigate the crops and orchards that surrounded the home. 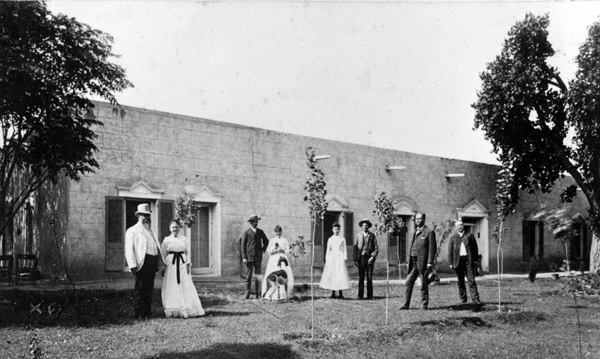 By the late 1870s, Joseph had established himself as a local farmer with various business and political interests. He was also prominent among the El Paso boosters, who promoted the border community as ideal for expanding railroad lines. Among the people he met with were Charles Morehead and O.T. Bassett, representing the Texas & Pacific Railroad. The three men quickly became friends and business partners, agreeing to establish the State National Bank of El Paso in 1881. Joseph and other bank directors soon became very influential in local business and politics. With the surge of railroads came settlement and expansion in El Paso, permanently cementing its place as a business center of the American Southwest. Joseph, with his landholdings and local prominence, was well positioned to take advantage. In the first city directories from 1889 and 1893, his occupation is described as “capitalist.”

Joseph was among local residents who worked to revive city government in 1880. In 1881, he was elected the fourth-ever mayor of El Paso. Two years later, he was re-elected with more than 69 percent of the popular vote. In a speech on his second election as mayor, Joseph expressed his wishes for the future of El Paso, including equipping the fire department, setting up a hospital bond election, implementing an organized system of drainage and street improvements, and the maintenance of a strong public school system. The council moved quickly to enact the entire agenda within a few weeks. By 1885, Joseph had led the city in making great strides to support business, meet local needs, and to operate an efficient and effective local government.

During a sojourn from City Hall, Joseph served as Collector of Customs and for a few years settled back into business. He was also active in the local campaign to relocate Fort Bliss. Soon, friends and business colleagues clamored for him to campaign for a third term as mayor in 1897, which he narrowly won. Joseph’s second stint at City Hall was very lively. He actively supported the construction of an exquisite, new City Hall. When massive flooding took place across south El Paso, Mayor Magoffin personally led crews day and night to reinforce dikes to keep the waters at bay and then helped restore a damaged city. This catastrophe and his previous experiences with flooding caused him to advocate for a federal project to dam the Rio Grande. In 1898, Joseph worked with federal officials to straighten the river and build levees to immediately provide protection for settlers in the bottom lands of El Paso. In 1899, he was elected to a fourth term as mayor by a sizeable majority. The prominent feature of his fourth term was his completion of negotiations with the Mexican state of Chihuahua for the straightening and channelization of the Rio Grande, called the Cordova Island agreement.

The private family life of the Magoffins is more difficult to reconstruct. It is apparent that educating Jim and Josephine was of prime importance to Joseph and Octavia. The Magoffin Home itself became a social center for the growing city, as Joseph and Octavia frequently entertained relatives, local elite, and out-of-town guests. Jim and Josephine became active participants in the local social scene as well. With Joseph’s success, the Magoffins were able to take many trips. The resort at Santa Rosalia, Chihuahua became a popular destination, and outings to nearby Cloudcroft were common during hot El Paso summers, along with trips to New Orleans, Washington, D.C., and Europe.

After the mid-1880s, the Magoffins lived largely off their income from the sale and leasing of properties throughout El Paso. By late 1897, after a massive flood, they decided to sell all but 20 acres around their homestead. The Magoffins were also mindful of their civic responsibilities. They donated land for a city park (today, Alamo Park in the Segundo Barrio) and sold three lots at a discounted price to the school district for San Jacinto School.

The Magoffins were very popular in the community and active supporters of numerous causes. The El Paso Times said that, “before the town had any organized charity associations, Mrs. Magoffin did the charity.” Octavia was a founding member of the Ladies Benevolent Society of the Church of the Immaculate Conception in 1895. She frequently served on reception committees for official visits and society functions in the community. Joseph’s business and civic duties made him an active participant at many significant community events. 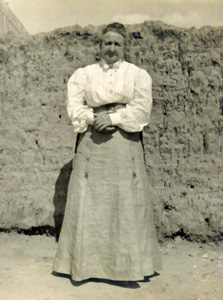 In 1906, Octavia was stricken with some form of partial paralysis. Joseph took his wife to New York to see one of the leading medical authorities. While there, they visited daughter Josephine and her children at Governor’s Island, New York. She was convalescing there when she died unexpectedly. Her body was brought back to El Paso for a private burial at Evergreen Cemetery.

Seven years later, their son Jim died of peritonitis after surgery for a burst appendix. Jim’s family moved back to the Magoffin Home, where they lived with Joseph and became his caregivers. Joseph had a massive stroke in 1923 while visiting Josephine in Washington, D.C., and he passed away soon after. His body was transported back to El Paso and he was buried next to his wife at Evergreen Cemetery. Joseph’s estate was divided between his daughter Josephine Glasgow and Jim Magoffin’s four children.

Joseph Magoffin contributed significantly to the early development of El Paso. Considered an El Paso pioneer, he utilized his resources not only for the benefit of his family but also to help the city he came to love. A Mexican-American, he never lost sight of his cultural heritage and functioned effectively in both communities. He left his mark on El Paso during the time it was transforming itself from a sleepy settlement to a bustling southwestern city.