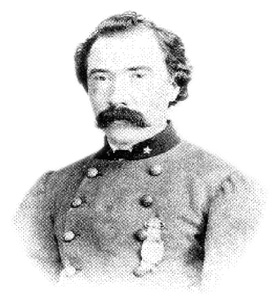 Richard “Dick” Dowling was born in County Galway, Ireland in 1837, and migrated with his parents and six siblings to New Orleans in 1846 during Ireland’s Great Famine. Dowling eventually settled in Houston in 1857, where he married Elizabeth Ann Odlum. Richard and Elizabeth had two children, Mary Anne and Felize "Richard" Sabine Dowling.

Dowling was described as a handsome man, with a good sense of humor and a fondness for practical jokes. He was not a talkative man, but kind and cheerful, and inspired confidence in those around him. Beginning in 1857 he established a successful chain of saloons, the first of which was an establishment named The Shades; it had a bar on the ground floor and a billiard hall on the second and was the first business in Houston to install gas lighting. Dowling's most successful saloon was named The Bank of Bacchus and was located on Courthouse Square in downtown Houston. The Bank, as it was known locally, became Houston's most popular social gathering place in the 1860s and it was renowned for its hospitality.

Just prior to the outbreak of the Civil War, Dowling enlisted in a Texas unit composed primarily of Irish dockworkers from Houston and Galveston known as the Davis Guard, named for former Secretary of War Jefferson Davis. Due to his natural leadership abilities, Dowling soon became the first lieutenant of the company, which surprisingly was not formally accepted into the Confederate Army until October 26, 1861.

Dowling and the Davis Guard, which earned a reputation as a highly skilled artillery company, participated in the Battle of Galveston in 1862. In 1863, Lieutenant Dowling and 44 of the Davis Guard were assigned to Fort Griffin, an earthen artillery post near the mouth of the Sabine River. Dowling spent his time at the remote outpost instructing his men in artillery targeting drills across the Sabine River's two channels, which the fort guarded. In an effort to improve his men’s artillery targeting, he implemented an innovative idea of placing colored stakes in the river that marked the cannons’ most effective firing range.

On September 8, 1863, a Union navy flotilla of four gunboats and 5,000 men attempted to enter the Sabine Pass. Dowling's artillery drills paid off as the Confederates scored several direct hits on the federal ships, disabling two of them, and blocking the others’ passage. The Union forces retreated and the Davis Guard claimed the capture of 350 prisoners and a large quantity of supplies; they did not suffer a single casualty in the encounter. The unlikely victory of Dowling and the Davis Guard thwarted the Union invasion of Texas.

After the Battle of Sabine Pass, Dowling was elevated to hero status in his hometown of Houston. He subsequently served as a recruiter for the Confederacy and was personally commended for his action at the battle by Jefferson Davis, who named the battle the “Thermopylae of the Confederacy.” The Confederate government offered its gratitude and admiration to Dowling and the Guard, while the ladies of Houston presented the unit with medals. The medals were actually Mexican coins that had been smoothed down on one side and inscribed with "Sabine Pass, 1863."

After the war, Dowling returned to his saloon business in Houston and quickly became one of the city's leading businessmen. Dowling's promising future was cut short by a yellow fever epidemic; he died on September 23, 1867.