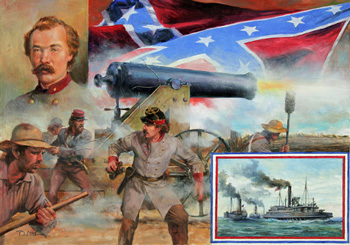 On September 8, 1863, the battle of Sabine Pass turned back one of several Union attempts to invade and occupy part of Texas during the Civil War.

The U.S. Navy blockaded the Texas coast beginning in the summer of 1861, while Confederates fortified the major ports. Union interest in Texas and other parts of the Confederacy west of the Mississippi River resulted primarily from the need for cotton by northern textile mills and concern about French intervention in the Mexican civil war. In September 1863, Gen. Nathaniel P. Banks sent 4,000 soldiers by transport from New Orleans under the command of Gen. William B. Franklin to gain a foothold at Sabine Pass, where the Sabine River flows into the Gulf of Mexico. A railroad ran from Sabine Pass to Houston and opened the way into the interior of the state. The Western Gulf Blockading Squadron of the U. S. Navy sent four gunboats mounting 18 guns to protect the landing of the transport troops. The Union commander, Lt. Frederick Crocker, formed a plan for the gunboats to enter the pass and silence the Fort Griffin guns so the troops could land.

At Sabine Pass, the Davis Guards—a Confederate Army unit composed of 45 enlisted men, one engineer, and one surgeon, all Irish and all in their 20s or younger—manned Fort Griffin, which was constructed by 500 conscripted slaves. The fort consisted of an earthwork that mounted six cannons, two 24-pounders and four 32-pounders.

The U.S.S Clifton shelled the fort from long range between 6:30 and 7:30 a.m. on September 8. The Confederates remained under cover because the ship was out of reach for their cannons. Behind the fort, Confederate officers gathered reinforcements, although their limited numbers would make resistance difficult if the federal troops landed.

At 3:40 p.m. the Union gunboats began their advance through the pass, firing on the fort as they steamed forward. Under the direction of Lt. Dowling, the Confederate cannoneers emerged to man their guns as the ships came within 1,200 yards. One cannon in the fort ran off its platform after an early shot, but the artillerymen fired the remaining five cannons with great accuracy. A shot from the third or fourth round hit the boiler of the U.S.S. Sachem, which exploded, killing and wounding many of the crew and leaving the gunboat without power in the channel. The following ship, the U.S.S. Arizona, could not pass the U.S.S. Sachem and withdrew from the action. The U.S.S. Clifton, which also carried several sharpshooters, continued up the channel near the Texas shore until a shot from the fort cut away its tiller rope. That left the gunboat without the ability to steer and caused it to run aground, where its crew continued to exchange fire with the Confederate gunners. Another well-aimed projectile into the boiler of the U.S.S. Clifton sent steam and smoke through the vessel and forced the sailors to abandon ship. The U.S.S. Granite City also turned back, thus ending the federal assault.

The Davis Guards fired their cannons 107 times in 35 minutes of action, a rate of less than two minutes per shot, which ranked as far more rapid than the standard for heavy artillery. The Confederates captured 350 Union prisoners and two gunboats. Gen. Franklin and the Union forces turned back to New Orleans, although Union troops occupied the Texas coast from Brownsville to Matagorda Bay later that fall. The Confederates, who suffered no casualties during the battle, received the gratitude of the Confederate Congress for their victory. Careful fortification, range marking and artillery practice had produced a successful defense of Sabine Pass.