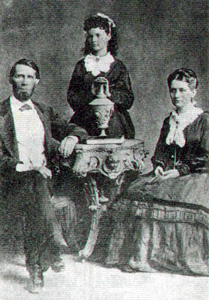 Dora Bell Maxey was the adopted daughter of Sam Bell and Marilda Maxey. Marilda was a good friend of Dora’s grandmother, Charity McGowen Moore, who, along with her second husband Hardy Moore, became Dora's legal guardians after Dora's parents died sometime before 1862. Dora soon lost the Moores as well due to pneumonia, giving Dora a total of four guardians before the age of seven! In 1863, Dora was legally adopted by the Maxeys and she remained close to both until she succumbed to cancer in 1884.

In 1873, Dora attended a boarding school, the Caldwell Institute, in Danville, Kentucky where she studied history, literature, music and the arts. Although she spent nine months away from her home and her family (August 1873 through May 1874) and missed them very much, she remained in constant communication with them through notes and letters like the one below.

Upon her return from Kentucky, Dora married Henry Lightfoot, Sam Bell Maxey’s law partner with whom she had also corresponded while at school.

I have only a few minutes to write you a short note. I am so very busy that I can’t possibly write a letter. I am anxiously awaiting father’s arrival: I received a card from Mr. Lightfoot last evening, saying that father would start on the 28th … so I am to look [for] him tomorrow at 2 o’clock.

I am studying very hard now preparing for our examination. I don’t think I will fail, but I am so easily embarrassed that there is a danger of my failing: we are going to decorate the Chapel next Saturday, so you can see how busy I am kept. I get up at 5 o’clock and study until 8, and in the evening from 4 to 6. We are not compelled to do so, but I had rather sit up all night than to make a failure.

Three medals are to be given, but no one knows who will get them. I will finish my picture in two or three days and it is a perfect beauty, considered so by all who have seen it.

I am sorry to hear of Aunt Settie’s illness, but hope she is well by this time.

Miss Sallie will not go home with me I suppose, or she would have said something about it in her letter. I hope she will not, for I expect to be a little jealous of your company this summer.

I received a long letter from Mr. Lightfoot this week, rather two letters and a postal card. Mrs. Balfour tried to tease me about it, said that I had had two letters in succession by the same handwriting, and that she suspicioned something. She laughed and talked to me about it for some time, she knew for she got the mail from the office. Mr. B doesn’t seem to know anything about it, though I give him my letters and he always gives me Mr. L’s. I want to show you something when I come home and I have great many things to tell you. Oh! We will have such good times together this summer. And it is only two weeks until I will be with you. I can’t realize it.

Well Mother this is all I can write you, this is my last letter home. Father will write when he comes. Love for all and a great, great deal for your won precious self. Don’t let any body see this letter for it is a miserable letter, for I have written it in such a hurry.

I did as you told me to do and directed to Sulphur Springs as he had asked me to do in his last letter.

Your affectionate daughter,
Dora B. Maxey