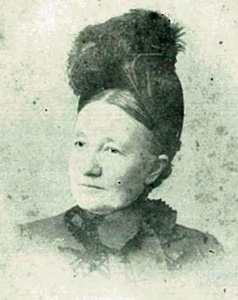 Marilda Maxey moved into her new home in December 1868 with her daughter Dora. Her husband, Sam Bell Maxey, was away at the time. This was to be a constant theme for the couple: Marilda at home while Sam was called away to work all over Northeast Texas as a lawyer or to serve his country as a United States Senator in Washington, D.C. While Sam was away, Marilda presided over the house that she loved dearly. She and Sam constantly wrote letters to one another, in which they discussed the management of the property. Sam praised Marilda often for her decisions regarding upkeep and maintenance. It was a partnership that appeared to work well for both.

Home was the most important place to Marilda, as it was where her family and friends were and where she was most comfortable. At times, however, Marilda was called upon to join Sam in Washington, D.C. so that he would not be lonely, although she longed to be home in Paris. When in Washington, Marilda would take in the sights while Congress was in session and Sam was working.

The following are excerpts from a letter Marilda wrote to J.L. Terrill, her niece’s husband and stepfather to Sam Bell Maxey Long. Sam often traveled to Washington, D.C. with his great-uncle to serve as his page, as seen in the letter. Marilda is telling Mr. Terrill about her time in the nation’s capital, as well as her thoughts on a present-day national landmark.

I received your letter of 24 last with much astonishment. I can tell you I like to be astonished in that way and hope you will continue to do likewise. From all accounts Lena Denton is a remarkably bright, pretty child. Mr. Lightfoot, Dode, Bennie and her Auntie Irwin have all pitched their tune by the key that sounds her praises. I regret to hear that she has the colic, but she will get rid of it in a short time now. Sam Bell had it till he was three months old, after that time he was free from it. Bathing in as hot water as they can bear and at the same time give them a few drops of some stimulating medicine is the best thing I have even seen tried…

Today we went to the “Arlington Heights,” the home of the “Lee” family… The house is an old style one, built after the massive, substantial style, very little ornament. The main building is three stories. The wings two stories. The Halls are broad and high. As I walked through the halls and rooms, I thought of General Lee and his wife and children, how often they had gone in and came out of the doors, of the many hours of joy and sadness they had spent in that grand old house, the house of their ancestors. It stands on a very high point of land that overlooks the Potomac river and Washington city… It was with more of sadness, than joy that I turned from the former home of one of earth’s greatest Generals and purest men. This Earth and its joys are like the wings of the mornings, swift, and pass, ere you knew it. We are carried hurriedly along. We hardly note the time, but all too soon we are let down beside our graves, the end of all things.

We are all well. I have some cold but not sick. Sam Bell and Mr. Maxey are quite well. We have beautiful weather but vegetation is not so near far advanced as with you. The buds are swelling and the leaves will soon appear. I do so long to see our Texas home. I am real glad you have been able to improve your place. You and Mary have a beautiful home, and every year you can beautify it, and find additional comforts in it. There is nothing to prevent you two from being perfectly happy, a good comfortable home, good health and a beautiful baby. What more could you ask. Well if I keep on I shall write all night. So good night, and God bless the trio

Sam Bell and Mr. Maxey sent much love to all of you. M.