While touring the Sam Bell Maxey House State Historic Site, visitors have the opportunity to see artifacts that were once owned and used by the Maxey and Long families. In fact, it is the abundance of these artifacts (more than 10,000 of them!) that makes the site so special. The first floor hallway is filled with artifacts that had significant meaning to Sam Bell Maxey. 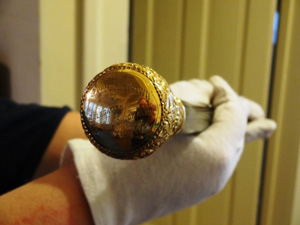 One artifact in particular, a gold and ebony walking cane, represents Maxey’s contributions to the relationship between the Confederate States of America and Native Americans during his tenure as Commander of Indian Territory and Superintendent of Indian Affairs from 1863 to 1865.

When Maxey took command of Indian Territory, much of it had been lost to federal forces, and thousands of Native American refugees fled the Union-controlled lands south into the Red River Valley. The refugees had none of the necessities of life: food, shelter, and clothing. As superintendent, it was one of Maxey’s duties to provide these items to the refugees. It was also his duty to make sure all Confederate troops in Indian Territory, both of Caucasian and Native American descent, had adequate supplies, such as weapons and ammunition, in addition to the necessities of life. 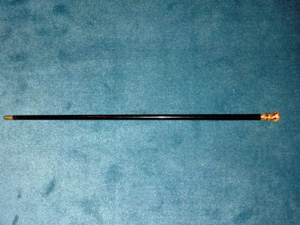 Maxey worked tirelessly to provide these items to both his troops and the refugees. He felt it was required of him and the Confederate States of America, since not doing so would break promises made in those original treaties and would show a lack of compassion for fellow human beings. He lobbied his superior officers for the troops’ supplies and set up the means to distribute food and clothing to the refugees. He looked across the Red River to his home state of Texas for the food supplies, asking friends and acquaintances what they could provide for the tribes. He never fully fixed any of the supply deficiency problems, but the Native Americans respected the effort Maxey put forth, and the cane is a token of the Chickasaw Nation’s esteem for Maxey.

After the Civil War, Maxey returned to the practice of law and entered politics. The Texas Legislature elected Maxey to serve as a United States senator in 1875. He served two terms in the Senate, where he continued his interest in Native American affairs by participating on the Committee on Indian Affairs from 1885 to 1887.