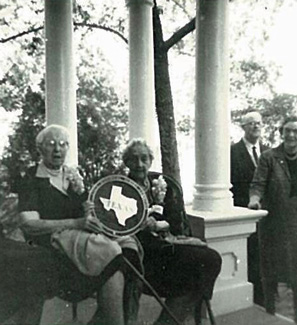 The staff at the Sam Bell Maxey House is fortunate to know living relatives of Lala Williams Long, who remember stories about Lala, Sam Bell Maxey Long, and Sallie Lee Lightfoot and willingly share them. During an oral history with Ginna and Shelby (granddaughters of Lala’s cousin and frequent visitors to the Maxey House as children), the staff learned a particularly amusing story about Sallie Lee, who was known as Bobbie to family and friends.

Sallie Lee was the daughter of Dora Maxey Lightfoot and the second grandchild of Sam and Marilda Maxey. She never married, living at the Maxey House with Sam and Lala until her death in 1966. She was the last person to live in the Maxey House. From the little we know about Sallie Lee, she was a quiet and genteel lady. This is what makes the following story so entertaining!

Sometime during the 1950s, Lala and Sallie Lee were on a trip to New York City to buy clothes, as this was one of the few cities where they would shop. While walking along the famous Fifth Avenue, the elastic in Sallie Lee’s panties broke and they fell to the ground. Without missing a beat, Sallie Lee stepped out of the panties, bent over, picked them up, and placed them in her pocketbook since no lady would leave her panties lying on the sidewalk of New York City. This was all done to the shock and horror of Lala, as both were proper ladies. It was Lala who passed this story on to Ginna and Shelby, of course.

Later on, Ginna and Shelby were listening to the popular radio announcer Arthur Godfrey’s show one afternoon just after he returned from a vacation in New York City. He said the funniest thing happened to him while in New York. He was walking behind two ladies on Fifth Avenue when one of them lost her panties, and he proceeded to tell the story of what he saw. Of course, no one else knew he was speaking about quiet Sallie Lee, but Ginna and Shelby did!