Our site is open, but capacity is limited. Please call before your visit. Help stop the spread of COVID-19: thc.texas.gov/publichealth 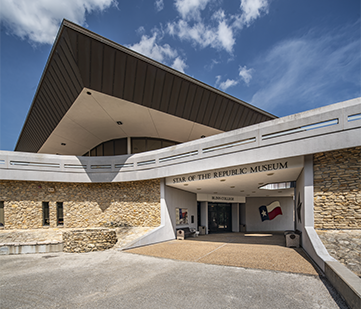 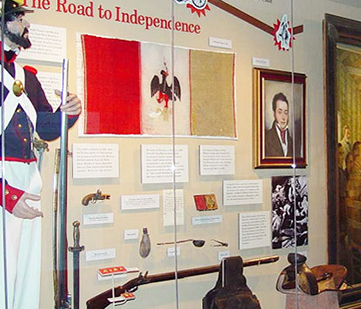 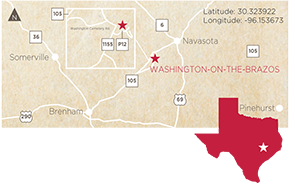 For ten years, from 1836 to 1846, the Republic of Texas proudly but precariously existed as a separate and unique nation.

The Star of the Republic Museum was created by the Texas Legislature and is administered by the Texas Historical Commission as a cultural and educational institution. Its purpose is to collect and preserve the material culture of the Texas Republic (1836-1846) and to interpret the history, cultures, diversity, and values of early Texans. The Museum strives to inspire interest, understanding and appreciation of Texas heritage for students, teachers, scholars, and the general public through exhibits, tours, programs, web activities, and outreach.

Since 1972, the Star of the Republic Museum at Washington-on-the-Brazos has held the highest honor a museum can receive: accreditation by the American Alliance of Museums (AAM), being one of the first museums in the state and nation to be so designated. Accreditation certifies that a museum operates according to standards set forth by the museum profession, manages its collections responsibly and provides quality service to the public. Of the nearly 8,500 museums nationwide, approximately 800 are accredited. AAM is based in Washington, D.C. and has served the museum profession since 1906. The Museum was re-accredited in 2010.

In 1965, when Gus Mutscher was a State Representative from Washington County, he introduced a bill appropriating $800,000 for construction of a “Worthy Museum, at the Birthplace of Texas that would be a Star upon a Star.” In 1969, Speaker of the House Mutscher, sponsored HB 634 of the Sixty-first Texas Legislature transferring ownership of the museum to Blinn College and appropriating an annual operating budget. The museum was dedicated and formally opened on March 1, 1970. It is the only museum in the state created by the Legislature for the exclusive purpose of interpreting the republic period of Texas history and its material culture.

Tickets for the be purchased at the Visitor's Center. Reservations not required.

Tickets for the be purchased at the Visitor's Center. Reservations not required.

Star of the Republic Museum State Historic Site is located in the Texas Independence Trail Region.