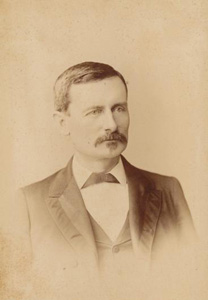 Dr. James Harper Starr had known George Clapp since the early 1850s and had close business associations with him. In 1858, 14-year-old Frank Starr, Dr. Starr’s oldest son, traveled with Mr. Clapp to Sabinetown from Nacogdoches on a business venture. He wrote home to his father about the trip, describing Clapp’s store and the merchandise. Later that year, Clapp married Sarah Fry in San Augustine, Texas. He adopted her daughter Clara, who was 8 years old at the time. To draw the families even closer to one another, Pamela Starr Raguet, Frank’s sister and a Civil War widow, married Clapp’s younger brother Emory in 1865.

We have no knowledge of when Frank Starr and Clara Fry Clapp first met, but we know their two families were already tied closely together, not only as friends and in-laws, but also through their land and banking businesses.

After Frank finished his studies at the University of Virginia in 1868, he and Clara married in New Orleans. As they traveled up the river to the Starrs’ home in Nacogdoches, Frank described their trip in letters he wrote to his father-in-law in June of 1868:

“I know well how Clara must be missed by her Father and Mother and she too must miss their great kindness and love as also much else that she has given up to be with me. She appears to be and says she is happy with me, and I assure you that everything in my power will be done to make her happy. Clara’s goodness and loveliness endears her to all who know her, and she is more and more dear to me every day.”

It’s easy to see from the very beginning how Frank felt about Clara. His concerns for her health and happiness are clearly evident.

“Our little town is as dull as ever. Clara is kind enough to say that she does not find it dull. She appears to be happy and I will try to keep her so.” 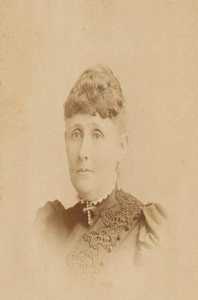 Frank reports to his in-laws regularly about the family and business activities and, particularly, about everyone’s health. Unfortunately, Clara had many illnesses to write about, including frequent bouts of “chills” and “neuralgia.” The November after they married, he was writing about a shipment of medicine for her, “The ‘Chill medicine’ for Clara has not arrived, and I hope will not be needed as she has for some time had no return of the unwelcome visitors.”

In April of the following year, Frank reported after a trip to Rusk: “Clara stood the rough travelling pretty well, but had some slight chills after our return. Since then she has been better than usual. She is anxious to see you and mother.” Clara missed her parents, and Frank was well aware of that. Traveling conditions between Nacogdoches and New Orleans were not very good, and he told his father-in-law that he hoped to move the family in 1870 after their first child was born. “One of my strongest reasons for desiring to [move] from here, is to be where it will be easy for Clara to visit you, and we will not rest satisfied until this is accomplished.”

When Clara was well, she and Frank would go for a ride every evening in their buggy, despite what were described as rough roads in Nacogdoches. In one short note to George Clapp, Frank wrote, “Clara continues well and I must now hurry home to take her to ride before it is too late.” They appear to have been a very devoted couple.

In April 1871, the Starrs’ new house, Maplecroft, received its third coat of paint, and they were excited about moving into the house. Frank wrote to George Clapp, “Clara is delighted and so am I—and so are all of us—with it. I hope too you and Mother will be pleased with it when you see it also. I wish to make Clara a present of a Bible on the date that we move into our new home. I don’t want Clara to know it beforehand. I think she would value it more than a set of jewelry, etc.” He described the Bible he wanted and asked Mr. Clapp to purchase it for him. He couldn’t keep from showing it to her in advance when the Bible arrived in Marshall. Frank wrote, “We are pleased—beyond expression with the beautiful Bible, and the lettering which I omitted to order—is very, very nice, just the thing I wanted. I was so much pleased with it that I could not keep it to myself till we moved into our new house, but took it to Clara at once. She is delighted with it.” 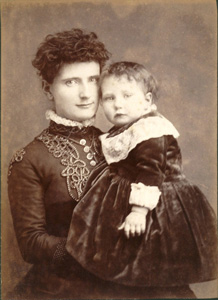 Throughout their marriage, the couple remained devoted to one another. Their lives were not without difficulty. Clara suffered from Hodgkin’s disease for most of her life, and the couple suffered the loss of four children all before they reached the age of three. In April of 1873, Frank wrote to his mother-in-law about the death of their second daughter Lily, who died after a brief illness at the age of two. “I should have written to you, but truly have not had the heart to do so. There is a great void in our little family—our little one gone. Our great happiness with our little ones has made the thought of such afflictions too terrible to contemplate. Now the affliction is upon us, and the fullness of it is too great to allow utterance. We will bear it the best we can and endeavor to submit to the ruling of an all wise and all good providence.”

The couple had a total of 10 children together. Six girls lived to adulthood. With Clara’s frail health, one would suppose she would have passed before Frank. Frank died in 1902 while Clara lived until 1925.