The Starr Family in the Civil War 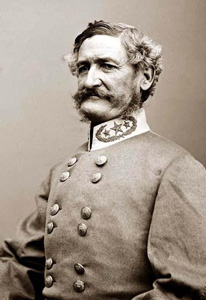 One might think that Dr. James Harper Starr, a Connecticut-born Ohioan, might have Unionist leanings, but quite the opposite was true. Although he opposed secession, Dr. Starr was a slave holder with strong state loyalties to his adopted state of Texas. His sons, Frank—the owner of Maplecroft—and Amory, were also clad in this loyalty. Dr. Starr was appointed as the enforcer for the Sequestration Act of 1861, "an Act for the Sequestration of the Estates, Property and Effects of Alien Enemies, and for the indemnity of Citizens of the Confederate States.” This put Dr. Starr in a very powerful position. Dr. Starr also served as Postmaster of the Confederate Postal Service of the Trans-Mississippi from 1863 through the duration of the war.

Frank enlisted as a private with his brother-in-law, Maj. Henry Raguet, in the 4th Texas Cavalry. They accompanied Gen. Henry Sibley on his ill-fated New Mexico campaign. In February 1862, Sibley’s Brigade invaded the northern New Mexico Territory in an attempt to gain control of the Southwest, including the gold fields of Colorado and hopefully, the ports of California. Historians regard this campaign as the most ambitious Confederate attempt to establish control of the American West. The brigade advanced north along the Rio Grande from Fort Bliss, Texas. They won the Battle of Valverde, where Raguet was killed in action. Both sides took heavy casualties. 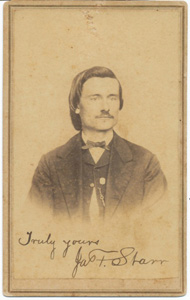 Sibley decided to abandon his attempt to capture Fort Craig and instead skirted northward toward Albuquerque and Santa Fe, where he hoped to capture much-needed provisions, as his supply wagons were burned in the battle. Hampered by the losses of horses and mules from the battle, he was forced to dismount the 4th Texas Cavalry as infantry. Pushing toward Santa Fe, the Confederates encountered a Federal force from Fort Union at Glorieta Pass. The Confederates were again victorious in defeating another Union force, but were forced to retreat as they were completely without supplies and could not press forward. The army had a long and arduous walk back to Texas; with a Federal force harassing them from Fort Craig. Upon his return to Texas from the disaster in New Mexico, Frank was appointed to the Conscription office where he obtained the rank of Major.

Amory, Frank’s younger brother, tried to join the Confederate Army four times, until in 1864, at age 17, he was accepted by the re-formed 4th Texas Cavalry. He was just in time to defend his state against Union invasion on the Red River campaign. Amory saw action almost as soon as he joined.

Throughout the political storm leading to secession, the Starr family in Texas was in constant contact with their family in Ohio, Dr. Starr’s brothers Hiram and Joseph. The political banter that their letters indicate often told of passionate feelings that were in opposition to one another. Joseph’s three sons, James (57th Massachusetts Infantry), Myron (49th Ohio Infantry), and George (128th Ohio Infantry) served in the Union Army. Fortunately, the family members did not have to face one another on the battlefield. All but James, who was killed in Petersburg in 1864, made it home safely.

The Starr Family Archives provide us with intimate thoughts of these families during the tumultuous times of our country. Look for an exhibit at the Starr Family Home documenting this family struggle during the Sesquicentennial of the Civil War in 2014.