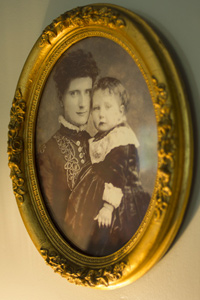 Born in 1809, Dr. James Harper Starr moved to Nacogdoches, Texas on January 17, 1837, with his wife Harriet J. Johnson, with whom he had five children. On December 14, 1837, the Texas Congress established the General Land Office, and President Sam Houston selected Starr as president of the board of land commissioners and receiver of the land dues for Nacogdoches County. He was appointed Texas’ Secretary of the Treasury by President Mirabeau B. Lamar in 1839. As a member of the Lamar cabinet, Starr participated in the relocation of the government offices from Houston to Austin. For financial reasons, he resigned in 1840 and returned to Nacogdoches and his medical practice. Before long he had changed careers to become a land agent for those who exchanged property for Republic of Texas debts.

In 1844, Dr. Starr partnered with Nathaniel C. Amory in a land agency, and he gained a reputation as an authority on Texas property laws. The agency grew and served as a bureau for advertising Texas land to prospective settlers from all parts of the United States until it achieved statehood. The business continued to be successful until Texas seceded from the Union. Starr’s sons, Frank and Amory, and his son-in-law Henry W. Raguet volunteered for Confederate service and served in the New Mexico campaign. After the Congress of the Confederate States passed the Sequestration Act in 1861, Starr was appointed to act as a receiver in the enforcement of the laws and served until 1864. In March of that year, he was appointed Confederate agent for the postal service west of the Mississippi River. His government career concluded with the end of the Civil War in 1865.

In 1870, Starr and his son Frank relocated their land and banking agency, James H. Starr and Son, to Marshall. This was Marshall’s first bank. Their efforts to survey, map and sell land throughout the state made them instrumental in Texas’ growth, as they helped bring railroads and new settlers to Texas throughout the remainder of the 19th century. Starr purchased 52 acres of land including the residence where he and Harriet lived and the eventual location of Maplecroft, the centerpiece of today’s historic site. Starr spent the later part of his life at his home in Marshall, and continued to advise clients on Texas land. He died on July 25, 1890, and was buried in Greenwood Cemetery in Marshall. Starr County was named for him.

Frank Starr married Clara Fry Clapp in 1868 and built Maplecroft in 1871 on land deeded to him by his father. The family renovated and modernized it through the years. Frank and Clara Starr raised six daughters in Marshall, most of whom settled nearby when they married. Ruth Starr Blake was the second youngest and her home still stands on the historic site. She moved back to Maplecroft when her husband Arthur died, and eventually inherited the family home. Blake remodeled and redecorated the house during her residence in the 20th century to accommodate her extensive glass and china collection. When she died, her niece, Clara Pope Willoughby, inherited Maplecroft and later granted the property and furnishings to the state of Texas. The historic site opened to the public in 1986.