African Americans at the Varner 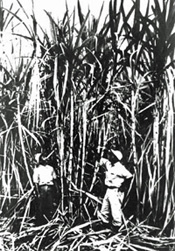 There has been an African American presence at Varner-Hogg Plantation for over 175 years. During this time, men, women and children have called the plantation home. Beginning in 1824, Martin Varner, the original land grant recipient, and at least two enslaved men worked the land. When Columbus Patton purchased the land in 1834 he too brought enslaved people with him from Kentucky. As Patton’s land grew in acres so did the number of enslaved people working there. By the 1840s, Patton’s plantation included 13,500 acres of land and 66 enslaved people, who helped to build a successful sugarcane enterprise complete with a large two-story sugar mill. Enslaved workers made bricks by hand and constructed the plantation house, smokehouse, sugar mill and their own quarters. Some enslaved people worked as skilled tanners, cobblers, blacksmiths, coopers (barrelmakers), and cooks. Most worked in the fields growing sugar cane, cotton, and food crops raised to feed both the enslaver's family and themselves.

When slavery ended in Texas on June 19, 1865, African Americans continued to play a role on the land becoming sharecroppers and farm workers. Later, African American cowboys handled the ranching, and when oil struck in the 1920’s many worked as roughnecks on the fields.

One couple in particular had an affinity for the plantation. Harold “Hal” Fields was born in Hardin County, Texas in 1887 but found his way to Brazoria County in 1900. He found employment working at Dr. Phelps’s plantation, known as Orozimbo, and by chance met Mary Coleman, the daughter of a local cowboy who worked on “The Varner” in West Columbia. On September 22, 1911, Hal and Mary were married at Orozimbo. Mary was just 17 and Hal 24. In 1917, on a trip to visit Mary’s father, John Gayle, the man who ran cattle on the Varner land in partnership with Will Hogg, offered Hal a position as a cowboy. Hal accepted, and he and Mary moved into a small house located in the plantation’s pear orchard. Upon Hal’s return from the military in 1918, he and Mary moved into another small house behind the site’s bunkhouse. Mary often helped cook for guests that Mike Hogg, Will’s brother, would bring down for weekend visits and also for Will when he stopped by. 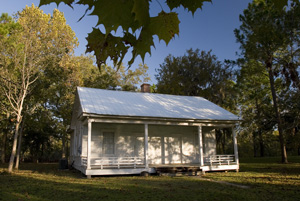 Hal continued to work on the site even after the oil fields dried up, working with the livestock. After the last manager left the grounds in the 1950s, Hal served as the site’s caretaker. When Ima Hogg donated the site to the state of Texas in 1958, the agreement included a provision that Hal receive life tenancy on what then became Varner-Hogg Plantation State Historic Site. The Fields continued to live in their cottage until Hal passed away in 1969 at the age of 82; Mary passed away in 1986.

The legacy of the plantation is not just the historical significance of the land or the buildings but the stories of the men and women who lived, worked and died on the Varner.