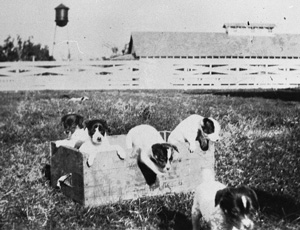 From the arrival of the site’s first permanent settlers in the 1820s until the last residents in the 1950s, Varner-Hogg Plantation provided numerous pets and animals with a place to call home. Ranging from horses, dogs, cats, birds, and a few wild animals, many served the dual purpose of being both working animals and companions, while some merely enjoyed the benefits of country living. No matter how small or large, each of these creatures helped shape the site and the lives of its residents in their own unique way.

During the early days of Austin’s Colony, as well as throughout the plantation era, horses were a vital part of daily life, not just for the labor they provided by pulling plows and other equipment, but for the constant companionship they offered to lone settlers traveling across expansive land grants and the vast Texas wilderness. “Ranging Men,” or rangers, in 1820s Texas, often covered hundreds of miles on patrol without anyone to keep them company but the horse they were riding. 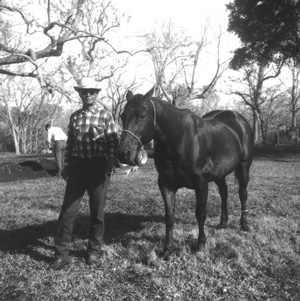 With the growth of plantations across Brazoria County in the 1830s, local planters began using their increasing wealth to showcase their favorite animals through horseracing. Many plantations began developing racetracks for their beloved horses, including the Patton Plantation, as well as Josiah Bell’s nearby plantation on which he established the Columbia Jockey Club.

After the plantation era ended in the late 1860s, the site became home to several large cattle ranching operations during the next century that were managed by a large crew of cowhands and their hardworking equestrian helpers. One such dynamic duo was the Hogg family’s ranch foreman, Hal Fields, and his horse, Buster. Hal worked for the Hoggs, managing horses and livestock from 1917 until his death in 1969. He traveled across the family’s 5,000-acre property on horseback almost daily. With Buster’s help, Hal rode out and repaired distant fence lines, tended and fed cattle, cleared land, and monitored outlying maintenance projects. 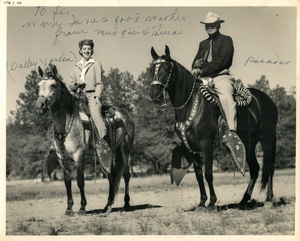 During the Hogg’s early years on the plantation, many late nights were spent on one of the family’s favorite outdoor activities: raccoon hunting. These excursions involved not only a pack of hunting dogs, but a number of horses as well, including Ima’s black Arabian stallion named Napoleon. Napoleon was so wild that supposedly only Ima was able to ride him, but even she could not prevent him from stopping at Varner Creek and turning up his nose in the middle of a hunt. As an avid horsewoman and experienced rider who delighted in galloping across the State Capitol grounds between college classes, Ima loved the challenge of working with a difficult horse and spent many hours getting to know the stallion’s personality. Over time, Ima and the feisty Napoleon bonded so intensely that even after long periods of separation, the horse would break free from its handlers and run up to greet Ima whenever she returned to the plantation for a visit. In her later years, reflecting on the adventures the two shared years before, Ima commented that Napoleon “was the most intelligent animal” she had ever known.

While his children were young, Gov. Hogg permitted them to keep a wide variety of pets beyond the typical household dogs and cats, including an assortment of raccoons, opossums, rabbits, fawns, and even a bear. The governor himself seemed fond of birds, as he amassed a personal collection that included two ostriches, an entire cage of cockatoos, and a redheaded parrot named Jane that would shout “Papa! Papa!” whenever he came home. His most beloved pet, however, was a wild goose named Polly that he wounded on a hunting trip and decided to rehabilitate. After her recovery, Polly became so fond of Hogg that she would follow him everywhere he went. The goose was rumored to have been so attached to the governor that within a week after the governor’s death in 1906, she also died. 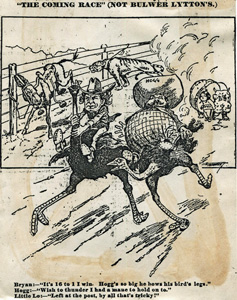 Two of Gov. James S. Hogg’s more unique pets, the ostriches Jack and Jill, were featured in political cartoons of the time, including a drawing from the Dec. 31, 1899 Minneapolis Times showing Hogg riding one of his birds alongside William Jennings Bryan. The governor spoke on Bryan’s behalf several times during Bryan’s 1896 and 1900 presidential campaigns.

During the years following the end of World War I, Ima Hogg was hospitalized in Philadelphia for several severe episodes of depression. Worried about his sister’s health, her older brother Will purchased a Pomeranian puppy named Buttons in January of 1920 as a companion for Ima. The small pup had such a profound effect on Miss Hogg that by the month’s end, she moved to a convalescence home outside of the city, and began taking Buttons on long walks. The pair’s favorite walking route was along Pine Street past numerous antique shops. These short adventures with Buttons were one of Ima’s first introductions into the world of collecting decorative arts, a hobby that later led her to furnish and develop Varner-Hogg Plantation as a public museum.

Cats also played a small, but vital role in the plantation’s operation by protecting human foodstuff and grains by hunting mice and other pests. These plantation felines also performed the indispensible task of protecting poultry and other farm animals by killing snakes that ventured too close to the chicken coop, the barn, the plantation house, and its outbuildings. One ferocious feline who took his job as a plantation cat very seriously was Brownie, a yellow tomcat that belonged to ranch foreman Hal Fields and his wife, Mary. Mary, who went blind in 1923, was deathly afraid of snakes, but could rely on Brownie’s presence to ward off unwanted pests or at least warn her that they were nearby as she performed her daily chores. Brownie also enjoyed being extremely vocal, and when not demanding attention, would use his voice to alert the Fields family that someone was at the door. Brownie and the Fields spent many years together, and he continued to be a helper and loving companion to Mary after Hal died in the 1960s.